Circa 2000
Before the first rays of the sun painted the sky pink, the echoing call of the majestic Sarus cranes woke me from deep sleep. I knew that the pair would be flying off to an unknown destination for the day, to return only after sunset.

When the first rains came, so did the Jacanas, with their mewling cry, almost like that of a baby. They would make their floating nest on leaves in the monsoon-fed pond in the vacant ground across our house, and one day, when the water dried, they would disappear, as quickly as they had once appeared.

The first nip of winter air brought back the Yellow Wagtail to our small lawn. Single and alone, it came from far, far away, our book told us, to spend the winter months soaking up the golden sunshine, which seemed to glow on the patch on its breast. 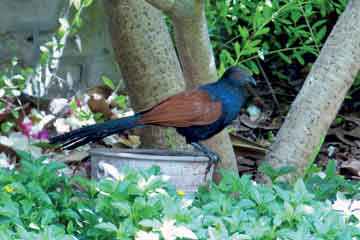 Another familiar visitor was the Hoopoe. We would see it walking back and forth on the dusty roadside, with its pickaxe head bobbing constantly.

And then, there was the Monitor Lizard who seemed to put in an appearance only on weekends. My son and I spent a lot of time imagining what Mr Gho (gho is the gujarati word for monitor lizard) did from Monday to Friday…

The little turtle that we found one day in our garden might have been washed in with the rain. It adopted us before we adopted it. We named it Tortolla and no matter how early we awoke, it was up before us, taking its morning walk from one end of the courtyard to the other. It moved, we discovered, with great speed and purpose, not at all like the plodding tortoises of storybooks.

These were only a few of the many friends that became a part of our family calendar.

Before you begin to imagine that I live in a cottage in some beautiful hill station or forest, let me share that I live in the dusty, crowded city of Ahmedabad. All around our house is a jungle, but it is one of high-rise buildings that seem to shoot up almost overnight, faster than the bamboo we had planted. All around, there is traffic, noise, smoke, and dust.

And yet, in that depression in the ground across the road, filled with some rain water, and the waste water that flowed from the nearby construction sites, my family and I saw the most interesting parade of arrivals and departures – from birds to buffaloes, frogs to fishes.

In the beginning we only saw them. But as they became regular seasonal sights, we began to get curious about these visitors. Shapes became names after we began looking for them in books – Jacanas, Wagtails, Naktas. These books told us more – what these creatures ate, how they got their food; what kind of shelter they needed; where some of them came from and where they went, and much more.

We also began to notice more than before. How the five lizards on our living room wall “fought” over insects; how the garden lizard on the fish-tail palm tree established a territory, which was “out of bounds” even for squirrels; and the shy shrew in our garden who was most often just an invisible squeak. The more we looked, the more we began to ‘see’.

We looked forward to meeting at dinner time to report on not only what we did at school or office that day, but also on the first gulmohar flowers that had appeared, or that there was a bulbul nesting in the hibiscus bush, or that a potter wasp had started to make a mud nest in the bathroom.

None of us was a “naturalist”, so to speak. But we found that waking up was much more exciting because we knew that we might discover something new that day. And with each exploration the children grew.

Ten years later
The urban jungle is rapidly closing in. Where the sarus called, jacanas nested and buffaloes wallowed, has risen the “most happening” mall in the city. The last two monsoon seasons have been deafeningly silent without the cacophony of frogs. We are grateful that our little garden continues to send forth new shoots, as the few veteran trees spread their branches protectively. And still we wait and watch for the little sights and sounds that make our day – the raucous Coucal who reigns over the gulmohar tree, the silent Shikra who drops by for a dip in the earthen water tray under the Champa tree, and the antics of the kittens from the latest litter of the resident feline.

Our children have sprouted wings and flown to explore new worlds. And still, we do report, albeit long-distance, that the fragrant raat rani has bloomed, and the overnight appearance of a huge beehive on the kari patta tree.

Those of us who live in the “concrete jungles” of our towns and cities generally think that nature observation is something that one can do only when one is outdoors, in undisturbed natural surroundings. We often forget to look closely and observe what is around us. This essay shares some of the excitement and adventure that can become part of our routine daily lives, and shows how this can happen. Sometimes the first step is to switch off the television and switch on our senses; shut down the computer and open up the windows.

The author is an environmental educator, writer and editor. She heads the children’s Media Unit at the Centre for Environment Education, Ahmedabad. She can be reached at mamata.pandya@ceeindia.org.