It was raining without a break and the traffic was heavy as usual. Holding on to the bar of the bus, Shanta was annoyed at the snail’s pace at which her bus was moving. Loads of work done and even more to accomplish … the thought of losing time in between made her wonder why the monsoon had arrived on schedule!

Being the headmistress of a local, family-run school required her to be punctual. She kept thinking, “Rajettan does not take any initiative to solve my problems. I have told him several times that I need to learn to drive at least a two-wheeler to be on time. One more vacation has gone by and I did not learn anything.” “Vypeen”, “Vypeen” the conductor’s scream drew the curtain on the thoughts that were crossing her mind.

A school in the coastal town where majority of the children were the wards of fisher folk. The risk involved going into the sea to fetch their catch or ‘chakara’ as it was known in Kerala. This made the fishermen realize the need for a good education for their ‘little future promises’. 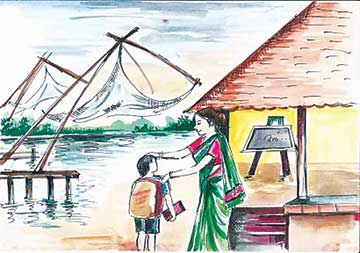 At school, Appu, the only son of Koran comes dripping to the classroom every day. “Wipe his head, Malini,” Shanta instructed the teacher as she walked through the corridor inspecting the classes. “Appu comes late almost every day.”

Back home, in the evening, Shanta, switched off all the lights, and pushed open the wooden latch of the main door, which slid into its space with a screech. Ammamma (grandma), an octogenarian, waited for Shanta to come home and sit beside her and massage her legs until she slept. “That’s enough dear, go take rest as you have to go early tomorrow.” With a smile on her face, Shanta went to her bedroom, opened the cupboard, took out a couple of her six year old son’s t-shirts and shorts, packed them up and put the packet into her bag.

The next day when Appu came dripping as usual, Shanta called out, “Appu…come here. Why are you coming late and wet every day?” Shivering with fear, Appu said, “I don’t have an umbrella, teacher. I have to tether my calf in the field and then come running to school. My grandmother is too old to do all that. Sorry, I will come on time tomorrow, teacher,” he pleaded. Knowing that Appu lost his mother a couple of years ago, Shanta refrained from asking any further questions. Instead she took him to her office and gave him a t-shirt and shorts to change into. Though a little reluctant, Appu accepted it and walked back to his class warm in his new clothes and his wet clothes in a packet. The t-shirt had a nice smell…the smell that used to come from the cupboard in which his mother used to keep his clothes. Appu was a happy lad that day, maybe because he experienced a positive stroke of love and care. Looking through the windows of her room, Shanta saw a cheerful Appu who was more enthusiastic than usual that day at play.

It was half past midnight, Shanta woke up with a jolt. It was raining heavily, there was thunder and lightning too. Soon the power went off and there was total darkness. While trying to recall her dreams, Shanta felt a shiver run through her.

Meanwhile, huge waves strike Appu who was trying hard to reach the shore in a small boat. With the power back, Shanta ensured that her son Siddhu was safe and asleep. Tossing and turning on her bed, Shanta could not slide into slumber. Appu and Siddhu were alternately flashing in her mind. The angry spell of rain slightly subsided, the frogs began to croak, crickets gave out deafening sounds and Shanta felt an unusual lull.

A devotional song from the neighbouring temple woke her. Looking at the clock, she said “Oh, I’m late.” Rushing to the kitchen, she began her daily chores. With the broom in her hands she headed towards the entrance to sweep. A bottle of milk was already there on the verandah. Quickly she prepared tea and breakfast. “Shanta, Shanta…..no black tea today?” …ammamma called out aloud.” Yes I’m bringing it grandma,” …she took a hot cup of black tea and handed it over. Another day dawned and the house was lit by the natural light at the centre in the “nadumuttom”, the open space in the centre of the house. Naani, the domestic helper came through the back door as was the custom. Shanta gave her a cup of tea and some instructions while handing over the charge of the kitchen. “Siddhu, get up, don’t you want to go to school today?” “No, amma, the Collector has declared a holiday today due to heavy rains,” pat came the answer. “Appa told me this while you were busy in the kitchen yesterday.” “Oh, is it?” “But I have to leave on time, you quickly take your bath and have your breakfast.”

Having set things right at home, Shanta was able to reach school on time though she got up late. There was a crowd near the school, police vehicles and all. As soon as she reached school, Malini teacher blurted out, “Shanta madam, many of our children were wiped away in the heavy rains yesterday. Their houses have been washed away. The police are here to check the records to know how many of them come from this vicinity.” Requesting the police officials to come to her office and check the records, Shanta broke down. She knew, hours later, her young ones would arrive lifeless, on the waves of the sea. “Oh I can’t bear it.”

While walking, Shanta wondered, with the sea as their mother or ‘kadalamma’ as they fondly called her, the fishermen relied entirely on her …their catch for the day and above all, a safe return from the sea after the catch. Many families lived there in thatched huts by the shore. Hygiene and sanitation took a backseat here. Children like Appu, Thambu, Kandan, all of them lived here. She recalled, once when it was her turn to take class, Shanta had asked the children to draw a landscape. Shanta appreciated the children for their beautiful imagination but within she was sad because all pictures either had a sea, a boat, or a fishing net. Isn’t there a life beyond this for these kids? Aren’t they aware of anything more beautiful than the sea or the seashore? She felt a big load of responsibility descending on her.

“Next Monday onwards, we will visit all the important places in our town,” she had announced in her class. She wanted to open the windows of their world beyond the sea and the seashore. Everyone was provided with a letter pad and a pencil to jot down all that they saw. In a specially arranged bus, the students were taken to the Dutch Palace, the Jewish synagogue, the High Court, the Kerala Museum, the handloom weaving centre, the Basilicas…. The young ones were thrilled.

At the end of each visit, one student spoke about it during the Assembly. Shanta felt so satisfied and happy listening to the sincere attempts of the students. My mission is accomplished…she felt. But the toil behind this endeavour was not an easy one. “Where do we get the funds from?” “We have to hire a van for a day and that too for more than one Monday. Do you think it is feasible?” the Manager was doubtful. “Sir, the students have to know about the world outside. They have to be sensitised and made aware of it,” said a confident Shanta. “We can afford a small percentage and for the rest we will find sponsors from outside,” replied the Manager. “Okay, Sir, we will look out for sponsors,” she said.

Malini and Shanta had quickly shopped for some articles to make cloth bags and within a week they completed them and put them up for sale in the nearby shops. Having raised some money they made pamphlets highlighting the need to sponsor the visits for these underprivileged children. After school hours, they distributed the pamphlets to the local businessmen who owned buses and others who owned export businesses. This fetched them enough to pay for the visits, which were paced out over the month. Soon, the children were ready to put up their exhibits on the wall. Shanta added her photographs of the study tours to the reports of the students and that was well appreciated by all.

All these thoughts crossed her mind as she was walking towards the coastal area. Her feet sank deep into the mud and she stood still when she saw the devastation before her. Out in the sea many life-guards and other safety personnel were searching the waters. Shattered huts, dead cows, dogs … the smell of death was everywhere…. Unable to bear the sight, Shanta walked back quickly with a heavy heart. The others were identifying the little speechless ones. Suddenly, Shanta heard a faint voice asking for help from a half destroyed hut. Peeping in she saw Appu lying there crying for help. He was trembling with high fever. Nobody else was to be seen there. Seeing Appu in Siddhu’s dress, Shanta could not control her emotions. At the hospital, Shanta pleaded with the doctor to attend to Appu. “We will do our best,” assured the doctor.

The next day was a holiday for the school as they had lost many of the young ones who were studying there. Shanta reached the hospital early next morning to see Appu recovering. She wanted to talk to Appu about his father and grandmother but the fear of hurting him stopped her. Shanta had brought breakfast for Appu. “Did you see my father?” Appu asked. “Yes I did,” She replied. “He is also undergoing treatment,” she said. “Where?” “In the town hospital,” said Shanta. “Will he come to see me?”Appu was anxious. “Of course, when he becomes all right,” replied Shanta. A couple of days later, Shanta told Appu, “The doctor says you are all right and can go home now.” “Now I can see my father,” he said. A chill ran down her spine….where was his father? Why did she give him hope? Would his father come in search of him? Was he alive? Despite her own fears, Shanta confidently said, “Appu, your father is just recovering, we are not allowed to see him now. We will visit him when he is alright. Okay? Now, will you come home with me?”
***
“Will you come home with me?”…looking into my eyes, my teacher had asked this question. Her compassionate looks, her yearning to get the affirmative from me, her helplessness, her desire to save me from my sorrow … the one with a large heart and open arms …….. she is the one I cannot forget, my Shanta teacher…. If not for her, I would have breathed my last long back…because of her I am what I am today.”

Recollecting these incidents with pain and gratitude, the District Collector Appu Koran wiped his tears.

“Leaving a mark, not in the annals of history but in the minds and the hearts of young ones lasts longer and stronger. This can be achieved only by teachers like Shanta,” said the Collector.

Usha Prabhakar teaches economics at Vidyodaya School, Thevakkal, Kochi. She can be reached at [email protected].