My son came home all hot and angry. He was clearly upset and frustrated about something. He banged the door of his room and claimed that he did not want to talk to anybody. I got to know about his anger when I came home after a tiring day. He had cooled down by then and seemed ready to talk. He had gathered his thoughts and proclaimed, “Mamma, everyone is so unfair. That aunty shouted at me. It was not my fault at all. I did not do anything.” A further probe revealed that a boy in his school bus had teased him endlessly and when the teasing became unbearable, he hit the boy. The boy had probably not expected this reaction from my son as my son is usually the helpless one and started crying loudly. On seeing this boy cry at the bus stop, his mother threatened my son and warned him against bullying other children. 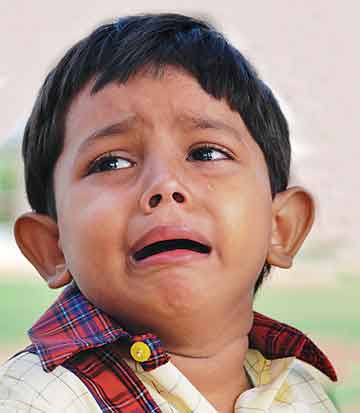 My son was upset, not because of his fight with this other boy (as the two of them forgot their fight a couple of days later), but because of the way the situation was handled by this mother. After listening to him, I inferred that probably my son was upset that she had made him out to be this vicious bad boy, who bullied children for no reason.

A few days ago, I was at a government school. The scale or a stick seemed to be the prized possession of every teacher. In the absence of the teacher, it came in the possession of the ‘class monitors’. These class monitors used it in the same way as their teachers, poking, tapping, beating. Every time I saw the scale being used either by the teacher or the class monitor, I looked at the child enduring it and every time I saw the child first wriggle in pain, swallow his tears and either display anger or fear. When I observed a teacher beat a bulky teenager’s knuckles, I saw anger in the 15 year old’s eyes and he seemed ready to give it back to the teacher. I recalled the Chennai incident, where a boy had planned and killed a teacher as she reprimanded him for continuously scoring low grades. Luckily for the teacher, this boy did nothing of that sort. He swallowed his anger and went back to his seat.

I do understand and believe that it is difficult for teachers to manage a big class. It is a complicated situation for them. Most have not learnt or experienced any other ways of disciplining children. They do what was done to them in their childhood. In the earlier days, the authority of the teachers or an adult was unquestionable. However, times are changing, children are more aware of themselves and their feelings. They also have a sense of being fair and just. My son was angry because this mother hadn’t tried to understand the situation from his perspective. While narrating the episode to me he said, “She doesn’t know me and she did not know what happened.”

This mother had used verbal threats which are as damaging as a physical beating. What worried me is that children need to learn positive ways of managing their anger and the way the adults handle situations of anger does not help at all. In my son’s case, by threatening my son, this mother actually taught him to threaten. For the very next day, my son held his little brother’s hand tightly, just the way this mother had held his hand and said in an angry voice, “If you do this again…, I don’t want to see you do this again or else…” I wondered whether, he was echoing this mother’s words. 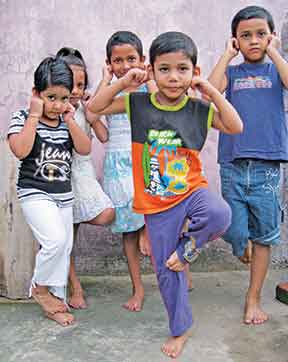 Threats are very commonly used by adults. When I get angry with my kids, which is usually over keeping their room untidy or for pecking at their food, I tend to slowly increase my volume. It usually begins with gentle reminders, then is followed by coaxing and cajoling and when that doesn’t work it ends up in a threat – ‘You will be allowed to go out to play only if you clean your room or finish your snack in five minutes’ or at times the threat is, ‘I shall give away all the toys that are not in their place.’ However, are threats helpful in the long run? Do children learn to take responsibility and ownership when they are threatened into doing something? Well, I don’t think so. All it does is to teach children to threaten on the one hand or to comply out of fear on the other. These very children grow up and use the same strategies to discipline their own children and the vicious cycle continues.

Gone are the days when obedience and compliance was blindly accepted as way of behaviour. Children today follow logic and reason. ‘Because I told you so…’ or ‘this is how it is…’ are statements that constrict critical thinking abilities and problem solving abilities of children. Such statements disallow children from understanding the reasoning behind why they are expected to do something and shifts the responsibility and ownership of the action from the rightful owner of the action, thus making it imperative to help children understand the ‘why should I do this?’ question, through logical reasoning about cause and effects and natural consequences.

Natural consequences are consequences that emerge naturally from an ‘action’. Thus the natural consequence of keeping the room untidy is to not find something when you need it urgently. An unnatural consequence would be denial of a favourite activity of the child like watching TV or going out to play. In a classroom situation, a natural consequence for incomplete homework or classwork would be less revision which would affect recall, class participation and performance in tests; unnatural consequence would be beating a child or punishing the child. Thus the job of teachers and parents is not to force compliance or use deterrence and fear as a tool, but leave nature to take its course. This way, children will not comply out of fear or out of respect; but will comply because their sense of logic and reasoning states that the action is a beneficial one and that non-compliance will lead to something that affects them negatively in future. Harry Browne (American writer) rightly said, “Everyone will experience the consequences of his own acts. If his acts are right, he’ll get good consequences; if they’re not, he’ll suffer for it.”

The author is a social development professional with over 13 years of experience in working with children and young adults. She took to teaching after she met with an accident in 2010. She taught math and social studies at a primary school in Mysore for three years before joining an MA in Education programme at Azim Premji University (APU). Currently a student at APU, she juggles her time between studying, teacher training, helping children with learning difficulties and looking after her children. She can be reached at sharmilagovande@gmail.com.