Ever since I was a little girl, books have always been my great passion. I’ve known pretty much since middle school that English Literature was the subject I would specialize in, and I was fortunate enough to gain admission into one of the country’s best colleges, St. Stephen’s, when the time came for my undergraduate admissions.

Everyone says that once you get into Stephen’s, you’re pretty much set for life, and maybe that’s true. But not even St. Stephen’s College can change the fact that an M.A. in English Literature doesn’t really qualify you for much more than a future in academics. And if you’re not really sure you want to spend the next five to seven years of your life getting a PhD, then that doesn’t leave you with a lot of options.

What is one supposed to do with a Masters in English? Publishing is one option, but that is not everyone’s cup of tea. Not to mention the fact that the number of big, reputed publishing houses in India can be counted on one hand.

You could get into content writing and risk being bored out of your mind. The same goes for developing web content, or writing ads, or blogs – yes, it’s creative, but it doesn’t exactly pay well, and after years of studying the very best novels and poetry, the chances are you will find it boring and not a very good use of your mental faculties. And then, of course, you could do the NET exam and teach at the college level – oh, but wait, the NET exam is almost impossible to pass. 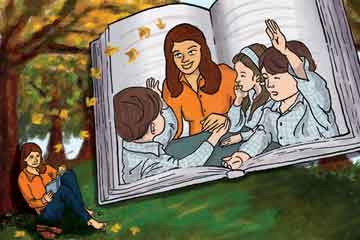 This was the thought process I followed when I tried to figure out what I was going to do after my M.A. I was on the verge of panic when I realized that there was one other option, that of teaching my subject at the school level. And although I didn’t fall in love with the idea at first thought, it was still the most appealing option of all the others that I had considered.

Everyone knows that there is a desperate demand for teachers. What most people don’t know is that many schools are desperate enough to overlook the fact that you don’t have a B.Ed if you have other qualifications that make up for it, provided you prove yourself in the “demo class”, which most schools will insist on before hiring someone.

In one of my interviews, I was asked why someone with my qualifications would want to teach English at the school level. I gave a model interviewee answer about wanting to mould fresh young minds and “make a difference”, that clichéd yet eternally golden phrase.

Some of this was true, of course. I could always have done an MBA and gone the corporate route, but my passion for literature was too strong for me to choose to do anything else. Some of that passion has been a direct result of the teachers I had in school. If I could do for even one other child what my English teachers did for me, I would consider that a huge victory. It’s one of the big reasons for my choosing this career path.

But I would be lying if I said there weren’t other, far less sentimental reasons. The first is fairly mercenary. Something which is not yet common knowledge is that good, reputable private schools pay their teachers very well. This is especially true of international schools, that is, schools which adopt the IB and IGCSE curricula. An established international school usually has a salary scale that starts from around Rs. 35-40,000 a month, and goes up to Rs 1.5 lakhs. This is on par with many corporate jobs.

Another big reason for young people with postgraduate subject specializations to try their hand at school teaching is that it gives one a lot of free time. The average school day ends at around 2:00 p.m., so you have the rest of the day to yourself. Of course, there will be a lot of corrections, lesson plans, and extracurricular activities. Teaching, like every other profession, requires hard work for those who want to be good at it. But even the busiest teacher will still have more spare time than someone working in a private sector company at what is called a ‘nine to five job’ on paper, but works out to something closer to a nine to nine job in practice.

And how many other professions have paid vacation?

Granted, actually enjoying teaching is very important if one is looking at doing it for the rest of one’s life. But as with every profession or job, this is something you will know only with actual experience, and everyone has to start somewhere.

Most young people these days aren’t thinking very far ahead into the future. When parents and relatives ask a young person nearing the end of his or her studies what his/her plans are, most often the answer they get is ‘I don’t know.’ And this is not just because many of us genuinely haven’t decided yet; it’s also because we don’t want to commit to anything.

Times have changed. You don’t have to stay locked into the profession you start in. It’s perfectly acceptable to switch to another course after years of study in a completely different stream. I have a 28-year-old classmate who is doing an M.A. in English after working for years in marketing. Everyone knows somebody with a similar story.

This is perhaps the biggest reason why young people who specialize in particular subjects have started looking seriously at school teaching as a career option – it doesn’t set anything in stone; and it gives one spare time to explore other areas of interest. It also has the added advantage of letting you stay connected with the subject you specialized in, which is important for people who are passionate about their chosen fields.

It doesn’t get much better than that.

The author has just completed her M.A. in English from St. Stephen’s College. She now works as a teacher at Vasant Valley School, Delhi. She can be reached at shreyapjindal@gmail.com.