I have ‘known’ Gandhi ever since I can remember. It all started with my grandmother who, running her home with my doctor grandfather in villages and small towns of what later became Tamil Nadu, was anonymously and intimately involved with the freedom struggle. She stopped wearing silk saris at the behest of Gandhi when he visited Pollachi, and donated what gold jewellery she had been wearing for the war effort. She and my grandfather sat at the charkha daily. In between they tended the gardens at home and at the hospital, and provided a sanctuary to injured four-legged creatures and lovelorn or convalescing nieces and nephews. 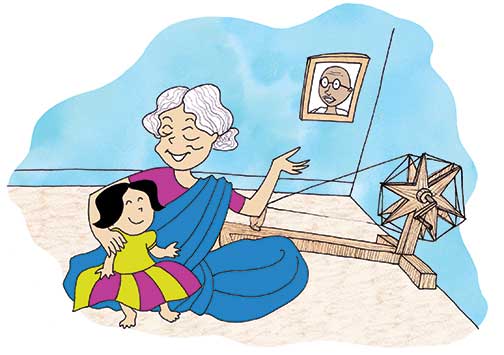 My mother and her older brother were too young for the charkha. So they, like a lot of other children, spun yarn on a takli (a small, portable spindle). My grandmother told me stories about the British, Gandhi and independence. She was married at 11 but all her life, she listened to the news on the radio/transistor. She was a political person, even though she had had just a couple of years at school; she schooled herself. She had barely any possessions, she kept herself and her surroundings spotless, she was busy every moment, even in her quiet times, and she simply would not tolerate injustice or telling lies.

Even as I write this, I realize these are some of the traits generally associated with Gandhi. Yet, my grandmother – and many others like her – was no Gandhi. Nor indeed was Gandhi a superhero (or the opposite, as his detractors like to claim). Tagore might even have done him a disservice by describing him as a maha-atma, not realizing how quickly we would consign him to the wall, proclaiming ‘Father of the Nation’. A child once asked me, “One person can have so many children?”

That’s how huge the mythology is around this person who was as real and as practical as one can get. In fact, when he said, “My life is my message”, he wasn’t being boastful or ingenuous. It really is. Which is why I believe Gandhi’s experiences and experiments offer many teaching and learning opportunities. I am neither an educationist nor a Gandhi scholar, or in any way qualified to comment on his philosophy of education. But there are some gut feelings I’d like to share, simply by virtue of having read, and continuing to read, all kinds of writings/commentaries about this remarkable individual.

Of course, no one was as prolific about himself, as in his thoughts, ideas, arguments, as he himself. Luckily, too, there are still people around who have personal anecdotes to share. For instance, my mother recalls how, as a student of Vidyodaya, a pre-eminent school in Chennai, which was very much influenced by the nationalist movement, she was part of a group assigned to sing ‘Vaishnava janato’ at a Gandhi public meeting on Marina beach. The girls practised diligently and for days, and they put their hearts and souls into the singing only to be ticked off by Gandhi for the rather overly soulful-bordering-on-doleful rendering!

In a recently published book called The Living Gandhi: Lessons for Our Times, edited by Tara Sethia and Anjana Narayan, there is an essay by James O’Toole called ‘The Practical Idealist: Gandhi’s Leadership Lessons’. In it he talks about how in South Africa, over the course of two decades, Gandhi acquired the practical skills of leadership by reflecting on experience – which, in a sense, is the thrust of this article. His study of various religious texts led him to formulate his own set of values: “What he learned in the process was to desire ‘the welfare of others’. This became the basis of a philosophy that might best be described as ‘humanism’.” And this is the philosophy that drives all his concerns, including education.

For instance, he was a votary of learning multiple languages – Persian, Arabic, Hindi, Sanskrit, English, and of course, the mother tongue. For a multilingual society such as India, what could be more useful than to be able to communicate directly with as many people as possible? Or his unshakeable faith in the power of manual labour not just to build character and self-reliance, but to learn?

In the same collection, educationist Anil Sadgopal writes about the pedagogic essence of nai talim. “The brain must be educated through the hand,” he quotes Gandhi as saying. It is “not about a vocation that is going to be imparted alongside education…whatever is taught to children, all of it should be taught necessarily through the medium of a trade or a handicraft. … Look at takli… The lesson of this takli will be the first lesson of our students through which they would be able to learn a substantial part of the history of cotton, Lancashire and the British empire… When he is asked to count the number of cotton threads on takli and he is asked to report how many did he spin, it becomes possible to acquaint him step by step with a good deal of mathematical knowledge…”

Gandhi has also spoken about the need for good handwriting. “Let every young man and woman be warned by my example,” he writes in his autobiography. “… good handwriting is a necessary part of education. I am now of the opinion that children should first be taught the art of drawing before learning how to write.”

The principles at the heart of this philosophy remain relevant to the Indian condition, even as the incidents relating to his life provide examples of values that are timeless. Who can argue with the need for truth-telling, good hygiene, self-sufficiency, self-belief, willingness to learn and change?

His philosophy promotes a holistic approach (bringing together head, heart, and hand), it emphasizes manual labour (learning by doing), it underscores the crucial role of the mother tongue (the natural medium of instruction), and gives importance to education being self-supporting. In the process, it holds the possibility of eliminating mindless rote-learning, bestowed upon us by the colonial system.

And what are the consequences of this system we have inherited? Mass-scale cheating, lack of assimilation of knowledge and comprehension, continued illiteracy and a whole host of other ill effects, including further class divisions in society … and of course, the very real problem of unemployability. On the other hand, as Sadgopal writes, “…the epistemology of productive work needs to be distinguished from ‘utilitarianism’ of the capitalist and market-oriented framework. The chief driving force in the latter framework is to use knowledge, values, and skills for controlling nature, appropriating people’s resources (including their knowledge) and maximizing profits. In contrast, the central thesis of Gandhian pedagogy is promoting human welfare through coexistence and cooperation, elimination of inequality and poverty and sustainable relationship with nature.”

So, how do we make all this mean something to small children? We cannot expect them to be Gandhi, even though come October 2, the most popular fancy dress ‘costume’ is Gandhi – such an irony! Here too, we have Gandhi’s own example. While they were still in South Africa, the children’s education was an issue because Gandhi didn’t want them to enjoy any privileges, so he didn’t send them to the best school, and he was not satisfied with what else was available. He made the children walk with him (8 km up and down) to his office in the city while he instructed them, and at his office he gave them reading and writing assignments. Once, poor Manilal forgot his glasses at home, and he had to walk all the way back home to pick them up and then go back again.

Of course, we don’t expect our children to stand up to a lathi charge, but we are talking about how to stand up to a bully. We are not saying they should let themselves be thrown out of a train on a matter of principle, but we are saying, learn to speak up for yourself. We’re saying discover the best way of doing a job by learning everything about it. We’re saying an eye for an eye does make the whole world blind. In Gandhi’s words, “I am not anti-English; I am not anti-British; I am not ‘anti’ any government; I am anti-untruth, anti-humbug and anti-injustice.”

These big and small ideas certainly have a place in our classrooms today. Most of all, Gandhi is about ideas and the power of ideas. As one class teacher said to a class of very restive students: “I’m not asking you to love each other, but you don’t have to hate either!” The times have changed, we have to adapt, but the fundamentals remain strong and consistent.

Gandhi always led by example – one of the biggest lessons he offers. Anu Bandyopadhyaya writes in Bahuroope Gandhi how he would help with the babies in the ashram. Once, when Mrs Polak was trying to wean her baby, “the baby gave her no rest and kept her awake by crying. That very night Gandhi took charge of the baby. After working hard for the whole day, delivering speeches in public meetings and trudging four miles, Gandhi sometimes reached home at 1 o’ clock in the night, picked up the child from his mother’s side and laid him on his own bed. … After a fortnight the weaning effort proved a success.”

Basically, forget the mahatma. Remember the stories, even the adverse or controversial ones. Nor do all our stories have to be about Gandhi because we have ‘mahatmas’ all around – ordinary people doing extraordinary things, quietly. That’s the real relevance of Gandhi today, in the classroom and outside it.

The author is a journalist and children’s writer based in Chennai. She believes in stories, real and imagined. She can be reached at <sandyrao99@gmail.com.