Most teachers work very hard in the class. They cover the syllabus. They teach the lessons. Yet, children cannot read. Why can’t children read? Let us look at a few examples.

Ravidas likes school very much. His teacher teaches very well. He can read all the lessons. In fact, Ravidas says that he can read most of the lessons without the textbook. Ravidas just holds the textbook in front of his eyes and reads at full speed. The teacher nods her head and corrects a few pronunciation mistakes here and there. I sat down with Ravidas while he was having his mid-day meal and asked him whether he could tell me the meaning of some of the words from the story he had read. Ravidas looked at me and said,‘I don’t know the meaning but I read well.’

Raju hates to come to school. His teacher asks him to read English. He lives at the end of the village in chorbasti. His family suffers the stigma of belonging to a tribe known to be petty thieves. Actually, his family works very hard for a living. But Raju suffers the stigma of his tribe in school. He is pulled up for small things and called a lazy thief. Because his parents insist that he attend school, Raju suffers this daily insult but he does not understand what happens in school. The daily grind of writing and reading aloud letter by letter makes him uncomfortable. Moreover, it bores him to write the same letter over and over again. He knows them well; these letters are part of his job of going from street to street delivering cow dung cakes that his mother makes. He has named all the streets using the letters. Then why should he come to school only to write them over and over again?

Sonu is the son of a postman. He finds school boring. He knows the names of all the people on his father’s beat and can read them out from the letters. When he rides piggy back on his father’s cycle, if an uncle or granny asks him to do so, he can haltingly read out their postcards for them. He never learnt to read, he just played with the letters while his father sorted them out, some in Hindi and some in English. He can read the names in both languages and finds no difference in them. Yet, he cannot read the school textbooks; he cannot understand the meaning of what he reads if he is forced to.

We find that even where a majority of children can read grade level texts, their comprehension level is very poor though. Children may have been able to decode but cannot make any meaning of the text. 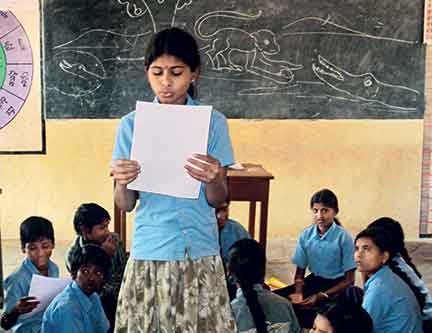 Language minority students, who enter school with little exposure to literacy, have had rich exposure of the world but not of the word in the second language context. Their native language often does not have a written form and therefore the experience of emergent literacy is missing from their environment. These children come from rural or migrant communities where an environment for literacy is not available both in terms of quality and quantity. Being first generation learners, the emerging literacy of these children does not get support from parents. Instead, children take on the mantle of supporting the parent’s literacy related tasks. Once they can read and write they may be called upon to read notices, bills, or other written material that the family may receive. However, even in deep rural areas, mobiles seem to have made an entry as a source of emergent literacy. We wonder if this resource can be useful in the classroom.

The development of literacy along with the cognitive development of such children follows the same pattern as those from more advantaged backgrounds, but they may approach literacy in slightly different ways from those who come from advantaged backgrounds. In India,learning to read English is not perceived as a need by the children but is valued by the parents and the community. For these children there is very little opportunity for meaning – making in the immediate environment, but a world of dreams – of power and money does exist somewhere beyond their reach.

In rural India the second language – Hindi, English and in some cases the standard version of the regional language – does not have much functional or emotional value for the local populace whose occupations and culture do not demand much acquaintance with this officialese or language of power.

Thus, it is only in the classroom that these children encounter the second language where pedagogy does not build any support for these emergent readers. With the absence of the support of a literacy rich environment, children find reading a mechanical and meaningless activity. They cannot connect emotionally or cognitively to the meaning of the words on the page.

For the last 15 years, research has demonstrated unequivocally that children in print saturated or print-oriented societies are engaged from very early in their lives in making sense of the printed word, in figuring out the symbolic nature of print and in discovering that print serves a variety of functions in their world. (Sarah Hudelson: Literacy Development of Second Language Children: from Educating Second Language Children The Whole Child, The Whole Curriculum by Fred Genesee) (Hudelson, 1994)

In India, in rural, poor and marginalized environments, paucity of print is evident. However, the child is making sense of the symbolic nature of language and in discovering that these symbols serve a variety of functions in her world. This may happen in different ways in different cultures, even in one country. The Kolam and rangoli, the colours of holi are symbolic ways of expressing joy and religious fervour. Various religious and cultural symbols enter the child’s world: the feet of Laxmi drawn at the doorstep every morning – always entering, never leaving; the drawings of swastika, the image of Saraswati drawn intricately on the slate on the day of Dussera, sindoor, alta, henna, mehendi, the warli paintings, designs of cane or cow dung are all drawings symbolizing something or the other – passed on culturally. Children participate in creating, celebrating and playing with them. They understand and make meaning of them – and of their world through them. Thus, the function and symbolic nature of language is not alien to even the most marginalized child. All that needs to be done is to extend this meta-linguistic knowledge to written language.

In the class when meaning, joy and doing work with the symbol is taken away from the child, she becomes a passive recipient of somebody’s words and the symbol loses its function and value. The child is alienated from literacy. Our pedagogical practices emphasize an incremental, letter by letter, repetitive approach which becomes a meaningless burden to the child whose environment does not provide her with meaningful inputs. 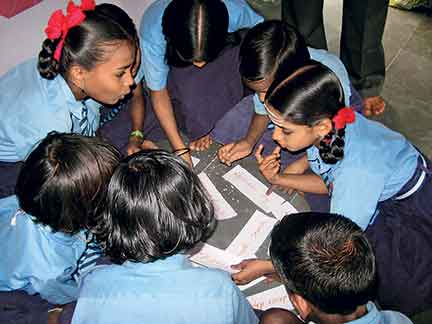 Let us take the cases of Ravidas, Raju, and Sonu.

Ravidas has somehow understood that reading means to engage in the skill of reading aloud, enunciating the words. He does not connect with the function or value of print in life. Perhaps Ravidas does not see his parents using print anywhere. What a teacher can do for Ravidas is to bring the various functions of print evident in the environment into the classroom. The classroom can have a post office where children can post letters to people. It can have a lost and found property box where anyone can put or take things they found and owners can claim their property after filling up a simple form. The teacher can put up a news board where home news can be put up by the children with the help of a ‘writer’. Every day, this home news can be read. Parents can come to the class and talk about their occupations and the way reading functions in their lives. Any or all of these seamless extensions of the child’s world in the classroom will make Ravidas a real reader for he will realize that the words in the textbook are not empty signs but they have meaning and value. The words of the text signify meaning like the symbols of the real world.

Raju and Sonu have gone a little beyond Ravidas in their understanding of reading. They understand that print has a function but to Raju, school is a hostile space while to Sonu his father’s office is a much more meaningful place where words have function and meaning. To Sonu and Raju textbooks are boring because the words in there do not seem to have any function and reading is no fun unless you can do a task with it. To help Raju find school a more supportive environment, the teacher has to change herself and bring about attitudinal change in children. Tolerance and acceptance of diverse realities and diverse ways of living is something that needs attitudinal change. So that Sonu and Raju do not become push outs from the system for two very different reasons; the teacher has to do tasks with the text. These tasks have to come from the culture and occupation of the children’s world. The teacher can engage the children in simulation of work environments while labelling and packaging things to be sent somewhere. The text can be dramatized. Role play can be done. Themes can be explored for becoming functional reading environments. Children can observe their parents going about their work and can report on small processes which could be written down in the target language by the teacher and then read by the students. This reading in both languages can happen in the presence of invited parents who could validate the texts by providing missing links. This process will bring the community closer to the classroom thus removing the distance between the world of work and the world of words.

Reading is not only a complex skill, it is a cognitive function related to the things happening in the world. It can be acquired from the environment with some scaffolding from the teacher. Along with the mechanical aspects of reading like the letter-sound connection, it is necessary also to connect reading with the life of the child. We must understand that reading does not happen between the reader and the text alone. The meaning, function, and value of the text lie in the world of the child and the task of the teacher is to connect the world of work with the world of words.

The author is Assistant Professor and Specialist, Academics and Pedagogy at the Azim Premji University. She has taught English in Kendriya Vidyalayas in India and Nepal. Her interests include teacher education, reading research and Mobile Learning. Her research is available on http://www.britishcouncil.in/sites/britishcouncil.in2/files/tec_13_publication_final_version.pdf, http://englishagenda.britishcouncil.org/sites/ec/files/CPD%20Lessons%20book.pdf. She can be reached at nivedita@azimpremjifoundation.org.