When I asked my adult Indian students why they wanted to learn or improve their English, one responded that “English is a global language” and he could use it anywhere in the country. Other students identified English as a valued asset for finding a job, helping their children with their English homework, and improving social status.

I have taught English as a second language to immigrants in the United States, to children and business people in Madrid, Spain, and to young women and girls in Kabul, Afghanistan. Teaching English in India has come with its own pedagogical challenges.

What makes English unique in Hyderabad and presumably in most of India, is that it is already part of the “daily life”. It is mixed in with commercials, television programmes, and Bollywood films. Signs on roads, buildings, offices, and shops tend to be in multiple languages, including English. Some Indian friends have commented on how “Hin-glish” is commonly spoken. The challenge is how to teach my American English without being well versed in the subtleties of the Indian English dialect in Hyderabad. One can imagine the advantages of being able to “speak the mother tongue of the students”. (See Why English Matters, Teacher Plus, Kiswah Ashfaq and Abhinaya Rao, March 2011, Page 10). Also, the Indian Constitution recognizes 22 languages and there are hundreds of dialects spoken, which already intermingle with one another. This can also have an impact on how English is learned. I believe it would be fascinating for a linguistic to observe how India is establishing its own brand of English. 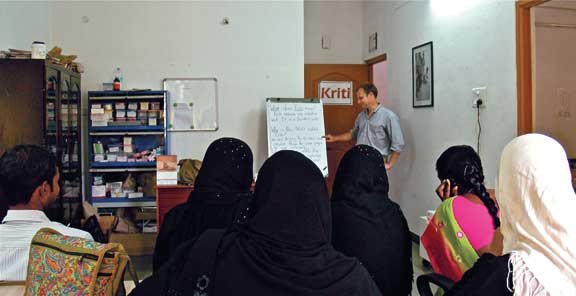 As an American teacher in India, it is important to understand the British influence on spoken English. A simple three-letter word such as “can” has different pronunciations. With my American accent, the “a” in the word “can” is closed compared to the open “a” or “ah…” that is commonly pronounced by my students. When to use the word “can” has also been a source of discussion. In many parts of the United States “can” is heard more frequently than “may” or “shall”, which I hear more often in India. Therefore, when I taught, “Can I take a message” for a business/phone conversation lesson, I had to clarify that “may”, “shall”, and “could” are acceptable and sound more polite and formal.

When do I “correct” a pronunciation of particular words? For example, a student informed me that the World Cup Cricket matches could be watched on television in homes, restaurants, and “hordels.” All of the students knew what a hordel was, while I had no idea. I wondered if this was a Hindi or Telugu word for a common location to watch sporting events. I asked them to spell it: “H-o-t-e-l”. Instead of immediately correcting the students, I thought of the different accents in my own country. For example, the Boston accent tends to drop the last “r” in a word. A simple sentence such as, “The drivah drove the cah to the bah” (The driver drove the car to the bar) could confuse a person from another part of the United States. If I were a teacher in Boston, I would not correct my students to say “car” with a strong “r” at the end. This is part of the Boston identity. Therefore, I do not want to take away the identity of somebody from Hyderabad who speaks with his/her own accent. A student in Spain once told me she did not want to speak English with a Spanish accent, but in my opinion, there is nothing wrong with speaking a foreign language with one’s own local linguistic style.

The way English words are used is unique from country to country. An Indian student came up with the question, “When did you conduct the meeting?” I understood the words, but the way “conduct” was used was not immediately familiar to my American ears. “When was the meeting?” would be a common way to formulate this question, however my Indian student’s question was not incorrect. Everybody in the class immediately understood his question, except for the English teacher. I showed the students other ways Americans may talk about “meetings” such as “I ran” or “I organized the meeting…” and of course, we use ‘conduct’, but not as frequently as my students. I find myself asking, “What do I correct?” Or do I show the various ways to say the same thing?

With good nature, usually, British friends have accused my fellow Americans and me of misusing the English language. A British workmate of mine in Spain emphatically explained how “pants” are worn under trousers, whereas in the United States, the word “trousers” is not used often. I was informed that my country and I was wrong. I do not want to be critical with my own Indian students. India has developed its own form of English and who am I to say what is right or wrong? I do not own the language. When a student says, “Yesterday, I going to my village,” then I can easily point out the improper verb tense. Yet, when one of my students says, “lift” rather than “pick-up the phone”, this causes me to reflect rather than correct. Truly, there is only a colloquial difference between “lift” and “pick-up.”

Because English is a global language, it takes on different forms according to how individuals interpret it in conjunction with their primary language. Teaching English grammar and sentence structure is relatively straightforward. However, when English words are adapted and pronounced to fit the local lexicon and accent, then the lessons become challenging, interesting, and even fun. This is an “ultra” (as my Indian students may say) complex discussion that may need to be tabled. But, what does a table have to do with a discussion?

The author is an elementary school teacher, in Bridgewater, Vermont, USA. He previously taught at the Children’s Workshop School in New York City. Recently, he volunteered with an NGO in Hyderabad called Kriti. He has also volunteered as an English teacher in Kabul, Afghanistan with the NGO, Afghans4Tomorrow. He started teaching 17 years ago in Madrid, Spain. He can be reached at [email protected].