When I met Indira Jayasimha for a long leisurely chat on a Sunday evening some years ago, I wondered whether her interesting life journey had somehow prepared her to start an experimental, inclusive school like Poorna Learning Centre. Consider:

So, in 1993 when her elder daughter was questioning why she had to go to school and her six-year-old son Karthik was being made to memorize useless things, Indira found that it made perfect sense to pull her three children out of school and teach them at home. Over time, others stuck in a similar predicament joined, and for many years Poorna thrived as a small, ten-children school operating first from Indira’s home and then later from a part-rented small field with some buildings on it. 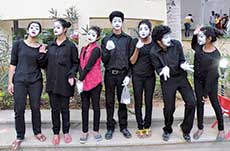 Karthik, who is now a confident young man on his first job, remembers being butted by sheep that used to graze in this field. He also remembers classes held under trees and sometimes, he told me smilingly, ON the trees. The passionate discussions and debates where anybody could bring up a topic and all voices were honoured is the other thing that has stayed with him from the time he spent at an evolving Poorna.

When I walked into the beautiful five-year-old red brick building that houses Poorna’s 90 children and 10 teachers today, the first thing I noticed was the feeling of openness, of freedom, that the architecture seemed to embody. The freedom was also apparent in the open classrooms and the happy looking children wandering around. What was NOT apparent was that a full 50 per cent of Poorna’s children come from underprivileged backgrounds and study for free. This and their welcoming special needs children from day one is what makes Poorna proudly ‘inclusive’. I spoke to Jayanthi, the principal and Saira, a teacher of many years and came away moved by their enthusiasm. They invited me to stay for lunch, which on the day of my visit, was to be prepared by volunteer parents, but I had some previous engagement and couldn’t stay.

Here’s hoping that the Poorna story inspires you with its simplicity and magic to start your own ten-children Poorna 2.0.