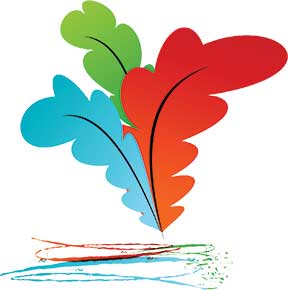 Our staffroom is buzzing with chatter these days. Even though we attempted a new discussion, some of us were still ruminating over the previous question, i.e., how to go about meeting the needs of diverse learners. Sunita Sharma pondered over this question and wrote in thus:
While there’s no denying that any class (or any group, for that purpose) is an extensive mix of different personalities with varying levels and needs, with children what succeeds is having a say in the entire learning process. Right from selecting the lesson for the next class, to preparing a list of new words, to choosing the words for dictation, and so on – I follow a single strategy of including them in the decision-making at various stages in the lesson. The class gets the message that every child has to participate and that all responses are respected. This develops a sense of ownership in them and they participate without any fear/hesitation. For example, for vocabulary building in young learners, I ask each child to identify the word(s) that (s)he doesn’t know the meaning of (any text will do for this exercise). Next, each child reads out the difficult words, and together, we sort out the common words and prepare a final list that everyone agrees on. Having been invited to decide for themselves, not only do they read the text carefully, they feel privileged to have a say in the final list. Apart from being a joyous learning experience it has also helped eradicate all boundaries! Because, even though different learning levels might still exist, the class, as a whole, has taken the first step to learn because they wish to learn and not because I’m there to teach. There’s so much more to share…

That capped the last discussion, in a way.

And now, we look at the question posed by Sreelata Menon of Peepal Grove School, viz.,

How can a poem be made a learning experience for the student?
This question drew responses that revolved largely around strategies, as the questioner appears to seek these. However, there were a few responses that touched upon the difficulty of spelling out generic strategies for something as subtle as sharing a poem. We begin with the responses of the former category. Sitalakshmi Natarajan shared thus:
Poems serve many purposes in language skill building. Each poem brings with it a certain mood that needs to be re-created for children in some way – as a foregrounding, before we go straight into the poem, e.g., if I were to teach ‘My Shadow’ by RL Stevenson, I would take the junior class children out and do some activities like shadow play, seeing how our shadow looks at different times of the day, etc. Then, I would read the poem with proper expression, pause and intonation, introduce the poet briefly, explain the poem, re-read, make them repeat the lines after me, and so on. We also try reciting the same poem in different tones – singsong, fast, slow, monotone, variations, etc., to help children understand how the same style of recitation doesn’t suit the mood of all poems. Also, adding ‘stamp, clap, move’ rhythms help greatly. Another angle I personally love to bring into my poetry class – to help develop a deeper connect with the poem – is encouraging children to add a stanza or re-compose the last stanza. These are just a few ideas to begin with. 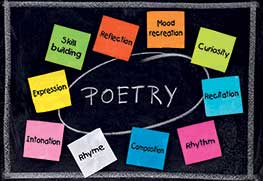 Kamala Anilkumar shared some of the strategies that she has found effective: I taught children from 1st to 4th grade in a mixed age group setting. We chose the poems from many sources other than textbooks. Because it was a mixed age group setting, older children taught younger children simple poems [4 lines with rhyming schemes]. It would be a group of 3 or 4 children of different ages. When the whole group was ready to recite/sing, they would present the poem/s in the class or in the assembly. The older children would choose poems from the books in the library or teach rhymes that they had learnt when they were younger. Some of these were in vernacular languages. Some even wrote their own poems. [One of these was about the Banyan tree in the school.]

In this age group, the aim was to enjoy reading a poem, reciting a poem with feeling, and at the end, share with the class if he/she liked the poem, what part of the poem they liked and why, whether this poem reminded them of any other poem, story, or experience. Children also drew pictures for the poem, individually or in groups. While doing this, the poem would be repeatedly recited or the words/lines in it would be said aloud many times. This helped in memorizing the poem.

When a new poem had to be introduced, I would write it on a chart paper – sometimes the whole poem, or at times, stanzas separately, or line by line. I would put this up on the soft board on a Monday which children would invariably go up to and read. Again, older ones would read for (or with) the younger ones. Alternatively, I would put up one stanza per day, from Monday through the week. This would create curiosity. Children enjoyed this so much that often they would even make up their own ‘next stanza’ or next line’ and check that with what I would put up the following day.

Sometimes, their homework would be to teach a [age-appropriate] poem to parents. These poems would be funny poems, about people, animals, feelings, etc. The poems would not be too long however. Parents appreciated this HW. [Textbook poems were not sent home, for fear of their becoming Q & A sessions by the parents.]

Kamala went on to add: A project dedicated to poems only would be done for about three weeks every year. During the project, children would learn about different kinds of poems, like shape poems, acrostic poems, haiku, thematic poems, and others. One kind of a poem would be taken up each year, along with other poems. Poems in vernacular languages would also be included.

Anticipating our question as to whether or not these poems were from the text, Kamala explained: All the above were done in addition to the poems in the textbook. In fact, older children would do the textbook poems on their own. How would the teacher know, then, as to what they had absorbed? Kamala went on to explain this as below:

At the end of every academic year, the children were encouraged to make a booklet of their favourite poems. Some poems were given to older children just to read and reflect. They did not have to recite them by rote. The intent, on the whole, was for children to grow to appreciate poetry, word images, and perhaps metaphors and similes, and also write poems – whether short or long – spontaneously, and share these with others – without hesitation.

Kamala summed up her overall flavour of poetry sharing thus: I think poetry ‘in the air’ for a week or two at a stretch will make children come back to poetry. We noted her use of the phrase: “come back to poetry”…implicit in this usage is the view that children are naturally poetic, perhaps, and a temporary drift away from poetry can be easily reverted.

While many more responses will be posted in the forthcoming installments, please do think about Indrani Barua’s question (posted alongside) and send in your responses to thinkingteacher22@gmail.com.