I would like to go down memory lane back to the year 1979 when I was pursuing my Bachelor of Education (B.Ed.) degree course. As part of the curriculum, I was supposed to take practical classes. I was assigned science in classes VI and IX in St. Joseph’s Academy, Dehradun – a school known for its reputation and ranked number one in Uttarakhand.

I was going to teach a class for the first time in my life. The topic given to me was, “Fertilization in plants” for grade IX boys.

Accordingly, that day, I prepared extensively with a well-framed lesson plan and included almost all teaching aids that one could think of in those days.

As the bell rang, I walked in confidently to present my lesson. Some of the students seemed quite excited to meet their new 21-year-old science teacher and immediately stood up to say ‘Good Morning’ in their loudest voices. The mischievous smiles on their faces reminded me of the movie ‘Parichay’ (released in 1972). In this movie, the children were shown to be naughty and very obstinate, but things started changing when a teacher (portrayed by the actor, Jeetendra) came to take care of the children who had managed to make every previous tutor run away.

I smiled back and asked the students to take their seats.

The structure of the classroom was such that it had a cemented platform right in front, on which the teacher’s chair and table were placed. This elevated slab helped students have a good view of the blackboard as well as of their teachers. The blackboard was fixed high on the wall above the platform.

After introducing myself briefly, I asked a few students to tell me something about themselves. I then climbed up on the platform to deliver my lesson. As I tried to hunt for some chalk and a duster, I realized that both these things were missing from their assigned place. They were purposely kept on the topmost edge of the frame of the blackboard, so that it would be difficult for me to reach them. I quickly understood that the children are in a mischievous mood today and that it was going to be a little tough for me to manage the class.

Anyhow, without any delay, I pulled a chair to enable me to reach up and pick up both the items. I then progressed with the lesson, but I found the class very talkative. Most of them were least interested in the chapter and were very noisy. I tried my best to draw their attention but they continued to laugh and giggle. I felt like they were rebelling against me. No matter what I tried, they refused to be quiet or still. I persisted and decided not to give up. I called some of them up to the front to help me pin up the lesson charts and arrange other teaching aids and plants on the layout table. 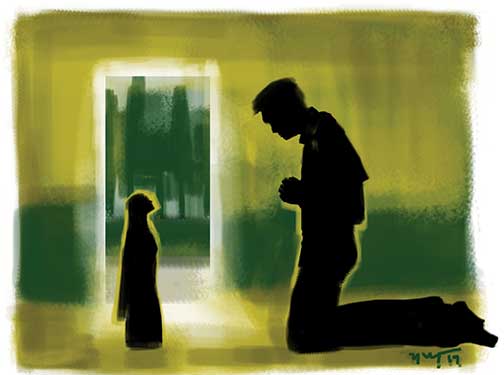 Just as the giggles and noise continued, a sincere student got up and told me that the chapter I had planned for the day was already covered by their regular science teacher in the previous class, and this was the reason the class was not paying attention.

Unruffled and sticking to my task as a teacher, I continued with the chapter and also began asking them questions. I tried to arouse their interest by noting important points on the blackboard. To some extent, I was successful in getting them into the “study mode”. The classroom had another door at the rear. In the middle of my lesson, the invigilator quietly entered to observe my lesson, and I did not notice her entry. The noise of the creaking chair and sudden uproar of giggles made me realize her presence. To my horror, the invigilator’s chair had broken and the poor lady got stuck in it.

Some naughty students of the class had placed a broken chair to have some fun. I was very embarrassed and ran to apologize, helping her out of the chair that she had got stuck in, hastily replacing it with another chair.

But the damage had been done. She left the class with a prominent remark in my record book that stated…. “Students need to maintain discipline in the classroom.” I was very upset both by the remark and the behaviour of the students. Just then, the student sitting next to the supervisor’s table saw that remark. He jumped out of his chair and shared the remark loudly with the other students of the class. He also pointed to a few students indicating that they were behind the act. Not intending to reprove any single student, I held myself in check. But to make them realize their fault, I asked all the students, “Children, how did you feel about my getting this remark today? You know this was my first teaching exam. The invigilator was here to observe my teaching method and classroom management.” There was a stunned silence in the class. All of them felt very bad for me as they realised their mistake. One by one, all the students who had actually played the mischief, rose from their seats to say ‘Sorry’. The whole class was very sad about the incident, so much so that one child surprised me by kneeling at my feet and crying bitterly. All of them admitted that they did it just for fun and had no malice intended.

It touched my heart. I held up the kneeling child and hugged him. This acted as a pacifier for the whole class and all of them promised never to repeat such mischief ever again.

The next day, I had to continue with the next subtopic of the same chapter. A group of students immediately took the initiative to help me post the charts and display my teaching material. To my delight, as the invigilator stepped inside the classroom, the entire class was absolutely quiet and attentive. I asked a number of questions to which they responded effectively. I had never expected such perfect behaviour from them. The invigilator was very happy and wrote good remarks in the record book. This not only gave me immense pleasure but also the confidence to handle students when they are not in a mood to study. I showed her remarks to my students who became my new young friends.

I can never forget my first day at school as a student teacher.

This episode taught me to always be empathetic towards my students. I learnt that before condemning our students for their behaviour we need to be a bit supportive.

The author is a former headmistress of Bal Bharati Public School, Brij Vihar and has several years experience of working with children. She has also held several managerial positions and was involved in successfully implementing many new policies and programs and staff development projects. She can be reached at sarojbhasin.bbpsbv@gmail.com.