The first Touchstone article for this year is a tribute to two children; one who is on the verge of entering her teenage years – Avani – and the other not yet into double figures – Siddarth, known as Siddhu. This is about the lovely make-believe games that these two kids play. 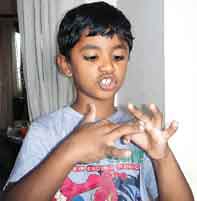 One day, I was travelling in a car with Siddhu and his mother Kshema, a colleague. She had offered to help me shop for some shoes; unfortunately my size was not easily available and we had to get in and out of four to five shops before we found what we were looking for. Initially Siddhu was patient, but soon got tired and cranky. He kept asking his mother for something to eat (ice cream had been promised) and she kept telling him that he would get it soon. For a while, this was fine, but by and by he got crankier, mumbled, whined and growled and Kshema kept shushing him. This went on for a few minutes and there was absolute silence in the car for a five full minutes.

I kept expecting either a ‘whine’ or an ‘Amma’ wail, but the little fellow pulled his mother’s head near his face, and with his huge eyes saying a thousand words, whispered something into her ear. She listened carefully (one always has to do that when kids whisper for they are not always clear, and stumble over words in their haste) and nodded. I was very curious and asked her what he wanted. She told me very matter of factly, (which meant that this was a common occurrence) that he wanted permission to play with her duppatta. I thought he would take it and drop it and dirty it or mess it up, but he did something very different. He took hold of her peach coloured chiffon duppatta and gathered two parts of it in his two hands (bunched a little bit of the duppatta in each hand, actually) and began a fantastic game. The car windows became his road, and the two bits of the duppattta his cars. He ran a race with these two ‘cars’ with sound effects and all. This went on for more than 20 minutes, by which time we had reached home. 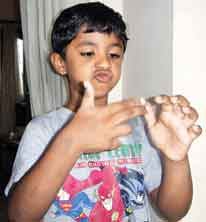 I was fascinated by what was happening in front of me; a tired, bored, cranky and probably sleepy child had been transformed into someone who could have kept himself occupied for hours, and that too, with two bits of a chiffon duppatta!

This triggered another memory in my mind of Avani, another colleagues’s daughter. One day, she was playing with dolls and next to her was a white plastic (hard) coaster. She took the coaster, and before putting her doll’s head on it she took the coaster in her hand, shook it out, put it down, pressed it hard with three or four fingers (as though to make a dent in the coaster). She also passed her hand over it a few times, as though she was smoothening it out; then she put the doll down on it to sleep. I wondered what she was doing, totally puzzled, for none of her ‘activities’ had changed the coaster in any manner. I asked her: “Avani, why were you pressing and shaking and rubbing that”, pointing to the coaster. With a very shy smile, (also embarrassed because she felt she had been ‘caught’ playing make believe), she said: “It’s a pillow Aunty”, and continued to play.

Even then, (this happened about six years ago, when Avani was also 6 years old) I had wondered about this child’s ability to imagine anything to be anything, but had left it as one child’s individual capability.

But when I saw a soft crushable chiffon duppatta being transformed into a hard metal car, I did more than wonder! I realized that for children, imagination is all it takes to help them change hard to soft, liquid to solid or vice versa. 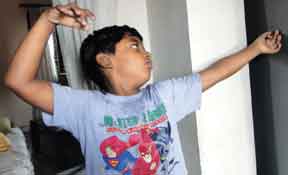 My ‘discovery’ did not stop there and the photographs that you see on this page is a testimony to that. I spoke to Kshema about this amazing ability her son has, to take two bits of a chiffon duppatta and convert it into cars. Very casually she replied: “Oh, that! It’s nothing. For Siddhu, even two fingers will do. I punish him and put in a corner and it actually becomes a non-punishment, because the fore and middle finger of each hand will come together and he is running races, sound effects and all! His hands become animals, cars, anything he can think of, actually. But I cannot tie his hands to punish him, can I?”

This ability that children have is amazing but neither recognized nor valued by us as adults. We struggle, later in life, to teach adults that the signifier (the name) and the signified (the object) are different and that the connection between them is arbitrary; that an object can be called anything else. With children. This seems to came with ease; they are able to make objects take on the qualities of some other object. Children can transform anything into anything. Hard-soft, movable-immovable, animate-inanimate… the dualities are endless, but for children, such divisions don’t exist. Two leaves and a few stones inside it will become a bird’s nest and the ‘stones’ will be treated as carefully as eggs should be! Sand in a glass will become water, and the glass full of sand will be carried with utmost care to ensure that even one ‘drop’ is not spilt.

Those who run theatre workshops would be delighted if their potential actors had a quarter of the imagination that all children are gifted with.

Where does all this amazing and wonderful creativity go, I wonder? Who stifles and kills it? Is it only organized schooling that converts all knowledge to rote learning or do all adults play a part?

When do we begin to lose our sense of childlike fun and imagination? We seem to think that this kind of play is childish, forgetting that there is a huge chasm between childish pranks and childlike fun.

A car in a duppatta and a pillow in a coaster are definitely not childish in their orientation. It is the creativity that poets are made of.