In the last instalment of this column, I wrote about the contributions made by the men from the military to the English language. I gave a brief account of how words and expressions like ‘sideburns’, ‘turn a Nelson’s eye’ and ‘put up your dukes’ came into being. This month’s column will focus on how the men of action have influenced the world of fashion the world over. 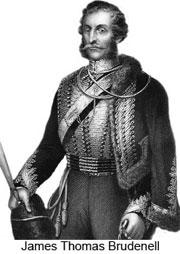 Let’s begin by talking about James Thomas Brudenell (1797-1868), an English General who is believed to have served with distinction during the Crimean War with Russia. By all accounts, this expert horseman was arrogant, and from early childhood was used to having his own way with those around him. As the only son in a brood of eight children, his parents spoiled him silly by doting on him. Unlike most aristocrats of the period, he was endowed with copious grey matter, and was considerably gifted in the use of his fists. After a stint at Oxford, Brudenell joined the army and quickly rose through the ranks thanks to his family connections. In 1854, he was sent to Crimea, modern day Ukraine, where the French and British troops were fighting the Russians. It was here that the future General and his fellow officers of his brigade made a fashion statement by wearing a cardigan sweater. Unlike the sweaters of the era, which had to be pulled over the head, the cardigan could be worn like a shirt. Brudenell’s cardigan was trimmed with fur and braids and had buttons in the front for easy wearing. When Brudenell and his 600 men were ordered to lead a doomed cavalry assault against the Russian army, they faced their enemy wearing the cardigan. Lord Tennyson immortalized their mission into ‘the jaws of death’ in his poem, ‘Charge of the Light Brigade’. The General and his cardigan are believed to have returned unscathed. The story goes that when he returned to base, Brudenell sat down with his fellow officers and had a hearty meal. If you are wondering why the sweater was named ‘cardigan’ and not ‘Brudenell’, it is because James Thomas Brudenell was better known among his aristocratic peers as the seventh Earl of Cardigan – a village in Wales.

The cardigan sweater was not the only good thing to emerge from the Crimean War. There was perhaps something of far more importance; something which changed forever how medicine was practiced. This war saw the emergence of nursing as a noble profession. The ‘Lady of the Lamp’, Florence Nightingale, and her group of dedicated nurses went to Crimea and did such a wonderful job ministering to the needs of the sick and wounded, the British public began to view nursing very differently. 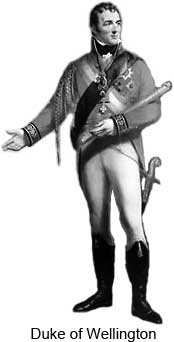 A soldier spends most of his time outdoors, and it is not surprising therefore, officers like Brudenell wanted to wear things that would keep them warm and comfortable. This applied not only to what they wore on their body, but also on their feet. Battlefields were often soaked in blood and sweat, and soldiers needed a pair of shoes which would help them grip the ground and keep their feet warm and dry.

Arthur Wellesley, the first Duke of Wellington, realized the importance of wearing comfortable shoes both on and off the battlefield, and set about the task of creating a trendy pair. He asked his shoemaker in London to make a pair out of calfskin leather that would fit snugly around the leg. Unlike the boots of the time, they stopped at mid calf and didn’t go all the way up to the knees. Wellington’s boots became a rage not only among the soldiers, but also among the common people who took great delight in aping the great war hero – the man who had defeated Napoleon in the Battle of Waterloo. The boots were affectionately dubbed… no, not ‘Duke’ but ‘Wellington’s’.

The Wellington boots are popular even today; you might know them by a different name: gumboots, rain boots, top boots, rubber boots, etc. They are not often used by soldiers, but by people who work in wet surroundings. As a result, they are no longer made of leather, but of rubber or some polymer which will keep the wearer’s feet dry.

The fashion changes brought about by the men we have considered so far were limited in that they did not affect everyone in society: in both cases, they did not bring about a revolution among the members of the opposite sex. This however was not the case with the individual we will be discussing next: he made a fashion statement which was felt by both men and women all across Europe. 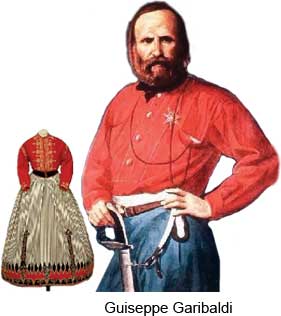 Guiseppe Garibaldi (1807-1882) was a rugged and handsome Italian who fought against the domination of Italy by Austrians. He had a charismatic personality, and men from all walks of life volunteered to fight with him in his various campaigns against the Austrians. Those who followed him were called ‘Redshirts’, for the shirts that this motley crew wore were red in colour. The Italian women, drawn by the magnetism and rugged looks of Garibaldi, showed their allegiance to him by wearing a red top made of wool. It was much shorter than the shirts that the men wore, and it was affectionately dubbed ‘Garibaldi jacket’/‘Garibaldi shirt’. According to most historians of fashion, this ‘jacket’ was the ancestor of the modern woman’s blouse.

Another revolutionary who brought about a change in the way men and women dressed was the former Chinese leader Mao Zedong. During the Cultural Revolution in China, this individual introduced the now famous ‘Mao jacket’ to his countrymen- it was a simple, shirt-like, high collared jacket which members of both sexes wore during Mao’s regime. He compelled all ‘comrades’ to wear the jacket so that there would be no trace of class distinction in the country.

Did an Indian bring about a revolution in fashion? It’s a no-brainer, isn’t it? More about it, later.