What does it mean to be a Montessori parent? Before that, why did I choose to be one?

Everyone wants the best for their child – that goes without saying – but how do we choose what’s best? Is there really an alternative to a child-centred process that is viable? Well, when it came to choosing a school for my daughter, I was more than a little worried because “institutionalizing” is a process I dread and believe that it is the slow killing off of innocence and curiosity and the natural love to learn. 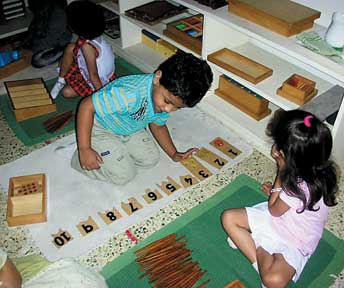 A cousin of mine who was a teacher spoke to me about this new school and how it was the “only” possible place to send a child. Unlike most parents, my husband and I had not booked our child for any seat anywhere. It was August and she was due to turn three in October. According to my cousin’s wisdom – hotly disputed by me then (I ate humble pie later, I admit!), I should have started her schooling when she was two and a half. Well, my logic was – if she is going to be in an institution for the next 17 or 18 years, where was the big hurry to get her started on one???!!!!

Anyway, we applied to Abacus. The first day I walked into school – very apprehensive, I must admit (well, after all, I had to trust these people with the most precious human on earth to me!), I was rather puzzled by the lack of wailing and screaming and crying that “first day of school” means to most people. Also, by the hordes of kids running around without shoes or socks of any sort (by any chance, had I wandered into a corporation school?)

I had been warned that the first few days till the child settled down, either a parent or someone close to the child would need to be in attendance – not in class but in the playground and in view of the child in class. I spent the first morning biting my nails and wishing I could be in class with Archana!

Being a biddable child (well, more biddable at 3 than at 17!), she agreed to ammamma sitting with her the next few days as I had to go to work. There was some anxiety that I could sense but as I relaxed over the next few weeks, she did too. Made some friends, though she was pretty happy to come home every afternoon! 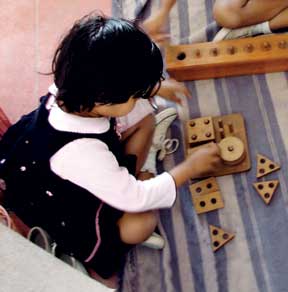 Over the next few months, she settled down well, though I was warned very gently to please not teach her the alphabet at home, as she had to learn it the phonetic way! That was what clinched it actually – here was a school saying don’t make her do stuff at home! I was thrilled!

The second revelation was when I was invited for an “open day” at the school for the first time and this little boy (in class 7, I think) carefully put me through a physicalconstruct of the Pythagoras theorem! I had grown up with a regular convent school education and this really brought home to me how different and how much more broad-based the Montessori system was.

Then calamity – the first teacher – one Meena aunty – left school. The next few days were traumatic, Archana would be fine when we left home every morning, but 15 minutes later when we reached school, she would have built up a fever of over a 100C and I would take her right back home! I was very worried about the number of days she was missing school – missed ten days in all – but the teachers and Amuktha, the Principal, advised me to be patient and that she would settle down. Well, she did, and the rest, as they say, is history!

We found great joy in watching her grow into a confident little girl with a large group of friends. I remember her coming home one day when she was about four, saying, “I’ve got a new best friend”. I told her how she might have a new friend, but a new best friend? Archana told me quite coolly, “Well, one new girl came to school today. Her name is Vinaya and she asked me if she could be my best friend. I said yes and she is!” Whew! I couldn’t help wishing that life would stay that simple! 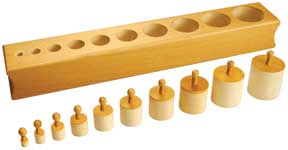 From that to becoming a Flock Leader in the Guides movement, to class monitor, to editor, through minor disappointments and scrapes, some achievements and hopes realized…to the flowering of a young woman who is quite clear about what her strengths are, what she likes doing, also what she doesn’t enjoy doing, what she wants to do with her life and the sense of connectedness that I see blossoming in her – the ability to relate to the world in an increasingly larger sense – a lot of it has been due to a system which teaches a holistic view, rather than discrete “subjects” to be got through for the sake of some exam or the other. I think in that sense, the Montessori system has made the process of learning rather exciting!

Obviously when the time came for our second child to start school, we did not look beyond the Montessori sytem – we were sold! Different child, different set of challenges… but we wouldn’t choose any different!

The author is an indipendent HR consultant working in the area of CEO placements. She can be reached at anuradha.venkatesh@gmail.com.