This month, I would like to look at two bits of ‘authentic speaking’, one by a three year-old child and the other by an adult who is a ‘basic’ level student of English as a foreign language. My three year-old nephew had been given one of these pop-up books which had the story of the Ugly Duckling; in it, the picture that accompanied the story was, for some reason, that of a mother duck holding a birthday cake, and 5 or 6 baby ducks all in a row waddling towards a nearby pool.

I did not want to introduce the notion of ‘ugly’ to such a young child and so when I narrated the tale, I changed it. My version was that the mother duck had made food (‘mum-mum’ in Tamizh baby language) (Tamil to the uninitiated) and told the baby ducks that she would not give them food to eat if they did not have a bath. One duck refused to bathe and remained dirty (azhukku) and the mother duck insisted that ‘if you do not bathe, you cannot eat” with a determined, No bath, no food’. After crying and protesting for a little while, the baby duck agreed to have a bath; all her dirt disappeared, she became clean and so the mama duck gave her food.

This was the tale, and as with all children, repeated over a few months.

One day, as I took out the book and began to ‘tell the tale’ this little tyke looked at me, looked at the book, (we were both on the floor) and with a huge smile on his face (he knew that he had understood the tale, but could only smile to indicate that) said:
“Aathu, kuTTi, mum-mum, (head shake from side to side) jo, (with a gesture of a fist (right hand) raised from the side and the curled thumb and forefinger touching the head).

All I heard were 4 words: but I knew that this little child had understood the tale and had captured its essence. Translated literally it says: “duck, baby, food, no (gesture) jo + gesture for bath”

This seems totally incomprehensible, but here is my translation/interpretation of the ‘communication’. Aathu is the baby version of vaathu, which means duck in tamizh, kuTTi is the word for small, so that indicated baby duck, mum-mum is the baby word for food, the shake of the head was from side to side to indicate negation, meaning no food, and the jo is a baby word in tamizh for bathing, which, accompanied by the gesture, meant bath, for the fist in that form was to indicate a mug of water being poured on the head.

Absolutely simple retelling, no sentences used, monosyllabic words, but the essence of the story had been captured. Verbal and non-verbal language had both been used for successful communication.

Anyone who had not seen the book I had used to tell the story of the Ugly Duckling, or who had not heard the version that had been narrated would have been right in assuming that this was incoherent and tangential. But as a care-giver, I knew that not only had he got the essence of the story, he had also exhibited excellent summarizing skills. 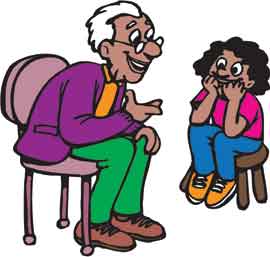 The other example is from my experience with teaching English to foreign students as part of proficiency teaching. I was teaching basic vocabulary and as a part of that, teaching my students (from different parts of the world) to fill in a form which asked for gender, marital status, place of work, etc. (Teaching adults base level language is always a problem; cognitively they have amazing world knowledge but they do not have the words to express them in this foreign language. I therefore use every opportunity to get my students to at least hear and understand complex ideas in the foreign language (here English) even if they cannot respond in that language). I used the opportunity of ‘marital status’ to raise the issue of monogamy versus polygamy and asked them to tell me the situation in their respective countries. Then the issue of women having several husbands versus men and several wives came up and I asked them why the latter is more common than the former. All of them thought about it and one Yemeni student asked whether he could ‘draw’ the answer on the board. I was intrigued and agreed. He drew stick figures: one female, and lines from that to the right – male figures to indicate several men as husbands. To the left of the female figure, he drew the stick figure of a child and put a question mark against the child and uttered only one word: Whose?

This adult male had a very clear world view and knew what he wanted to say, but did not have the means to say it in English. He therefore ‘drew’ a response!

As a ‘speaking’ response, this ‘performance would have got zero marks, for he had neither the vocabulary nor the grammar to speak the sentences required to convey these ideas. However, as a response, as ‘communication’, I would have had to give him full marks; he did not have the language but he was able to convey what he wanted to say through non-verbal means.

The little child and the adult both heard and comprehended what had been spoken and in their own ways, retold or responded to what had been said. Without understanding, these responses would not have been possible but often, when we evaluate language, we forget to value ‘receptive knowledge’ the understanding that happens. We also have pre-conceived notions of acceptable responses and when they do not match, we often do not think beyond the ordinary and value the communication that happens.

An oral examination oriented towards international (or national level) certification may not be able to give credit for these two ‘responses’, but I do hope that if it happened in a classroom, (as one of them did), continuous evaluation will be able to value them as meaningful and successful.