If you ask this question, the answers that you get differ, depending on whether you are talking to new agers/science teachers/environmentalists/non-science students. For some, chemistry is a bond, a connection or feeling between two or more people, for others, it is the source of all pollution, and for students it is a hard subject that they have to mug up for the examination. There are very few who seem to enjoy the subject. This is not just here, in India, but all over the world. The word ‘chemical’ has all the potency of a bad word. Why has this situation arisen? Why has chemistry become the villain of the modern world (now shared by genetic engineering)?

‘What is chemistry?’ – On being asked this question when they first enter the laboratory, my students, ranging in age from 9 to 13, say; mixing things, acids, chemicals…when asked ‘what is a chemical? –there is the circular answer, whatever we can see here – plastics, acids, etc… It is clear that the message is that chemicals are artificial. This is, perhaps, because, unlike in physics or biology, the principles being studied do not seem to be applicable in the world around. Also, the heightened awareness of pollution and the idea that ‘natural is good’ is all around. Do not get me wrong, my students enjoy their time in the lab and find the reactions magical, but…

Chemistry can be defined as the study of materials, how they react and change. This encompasses everything from the banana you eat to the latest plastic, tailor-made for a particular use. Human beings have used and studied reactions for thousands of years. Nobody knows when fire was first controlled and used for cooking. Firing of pottery is at least 6000 years old. Extraction and working of metals came a little later. These reactions were recipes, documented and passed on (or kept secret) to use materials. Medicines probably came the same way. In all this documentation, the ritual connected with transformation was as important as the ingredients added and probably acted as a memory aid. This, of course, complicated the understanding of what happened. With the western advent of alchemy, the documentation became more systematic and the accumulation of data allowed the development of theoretical ideas of atoms, elements mixtures, and compounds. One can call this the advent of modern chemistry. Chemistry became more modern with the advent of atomic physics. Now, there was an explanation for the way elements reacted and theories of bonding could be developed. The structure of the atom allowed us to explain the many empirical tools such as the periodic table, laws of electrolysis, elemental spectra and valences. At this time, most scientists thought that chemistry would just be a branch of physics. You could after all calculate energies by setting up a wave equation – there was no need to do experiments! Fortunately, a real chemical system is far too complex to model that way, so the science still requires labs, test tubes and reactions to get new data and understand what is happening. The theoretical basis still helps. It lets us predict what may happen and allows for modelling. 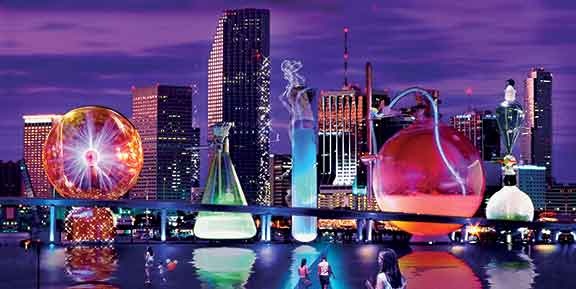 What is chemistry? It is the study of reactions, both natural ‘in vivo’ and in the lab ‘in vitro’. It is also the learning of a new language, that of reactions formulae and names. A study shows that a student in a first course in chemistry is likely to meet and learn about 6000-7000 units of information. This is more than that encountered by a student of a foreign language. It is the use of this language to write, i.e., synthesize new materials, or to read, i.e., to explain reactions which occur all around in nature. It is this aspect of chemistry that makes it hard to study and teach. You have to learn a new language, and you have to do it in a messy way, doing reactions and from the changes, of colours, smells and other properties, infer what is happening. You have to do it with a language you are just beginning to learn. For all that seems very much like English, the words have meanings that imply a great deal. Look at the word ‘filter’. In the lab, using the word should bring up an image of a funnel, a folded filter paper, a solution and a residue. This means that the study of chemistry is and has to be an experimentally based one. Since that is hard to set, particularly at the school level, the study of chemistry has become difficult, like learning a language from a text without the help of dictionaries and pictures.