When I was a child I was always told that I needed to prepare myself for life by doing well at school. I competed in everything trying to outdo all my classmates. I was always getting ready for life. But I did have this nagging doubt in my mind, ‘When would I start living?’

When I became a parent I decided to give my children’s childhood a chance. I did not want them to live in preparation for life.

We moved from a busy city to a place in north Kerala where nature was our only company. It was as remote as remote could be. We were lucky the days we saw a human pass by on our mud track road. The nearest school for my boys was more than 20 km away and arranging transport especially for them seemed difficult. They were then 11 and 6 years old. We made the world their classroom with no bells and no fixed duration for the periods. I did not even have any subjects to teach, but they had lots to learn.

As there was no help at home, all the household chores had to be shared by the members, which included the boys. Sweeping and mopping the floor was their part of the ship, sweeping being the more boring task. The mop had the popular appeal for the obvious reason of being able to play with water. My children helped me in washing vegetables, making an occasional cup of tea and rustling up breakfast on Sundays. I cannot miss out the spring cleaning of the cupboards that we did.

Early mornings and sunset time were set aside for bird watching as the region was best suited for birding. We introduced ourselves to bird watching with the help of a small field guide written by a friend of mine. We learnt to identify more than 50 varieties of birds. We could now spot a coucal, drongo, hornbill, brahminy kite and many more. This led us to do a more detailed study of birds and their habitat.In November we had avian friends visiting us from distant lands and who stayed on till early April. It was amazing to see hundreds of seagulls landing on the 7 km virgin beach feeding on small mollusks, crabs and other life forms found on the sand. We enjoyed and learned to appreciate the birds for their lovely birdsongs and vivid colours. There is more to see than that meets the eye.

The newspapers were our only link to the world outside. We would come to know of bird races conducted in our region through them. The field craft of learning to locate and identifying birds cannot be acquired by reading books. So we went on field trips with other birdwatchers in the region.

My older son was passionate about horses. There was a stable close to where we were living. It was used to train young people on horse riding skills. It so happened that a dozen horses arrived at this stable from the equine breeding stud farms in Hisar and Babugarh. They were quite unsettled and frisky with the change of place. Some were even injured due to the long journey by train and road. My son spent hours cleaning, feeding, and riding them in turns to keep them exercised. The best way to nurse them back to health is to ride them every morning and evening. When the stable hands were tired of this routine, my children were always willing to pitch in. Watching the horses through their daily routine was an experiential learning which no book would have given them. 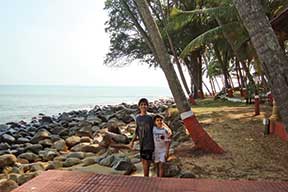 We lived at the foothills of a small hillock rising 260 metres in height with white sandy beaches on either side. The hill had a black rock which jutted out like a fist. With this feature in our vicinity, how could we miss out on mountaineering and rock climbing. Climbing a smooth faced rock means looking for crevices in the rock where one could get a grip with no safety harness. Touching the peak and hoisting the flag was always part of our itinerary for the guests who visited us. During this climb we would also go around spotting herbs. Noticing scats of animals and guessing the animal was another pastime. One of the animals that we identified this way was the civet cat. Even those who were apprehensive, felt a sense of accomplishment after returning from the expedition and would proudly exhibit the few bruises they got on the way. The boys would guide them on the fine art of climbing down a hill which is more difficult than going up. My 6 year old accomplished this feat successfully.

On Sundays we made it a point to visit the stretch of white sparkling beach. Watching the sunset made us feel sad at times. Watching dolphins dive and kiss the waves with their pouts was a sight for which we would sit for hours by the beach.

The boys loved riding the waves during the period from November to March. They learnt sea swimming the fun way. Mind you, sea swimming is very different from the swimming we do in manicured pools. One needs to endure the salinity of the sea water as it goes into your eyes and every pore of the skin. This wave pool was priceless and incomparable to any of the artificial ones in theme parks. Walking barefeet along the beach and collecting sea shells was always a time for sharing ideas, feelings, and fears.

As sunset, we had to give way for the night creatures like the golden jackals. They were nature’s scavengers. It is interesting to see the jackals wriggle their tail into crab holes in the beach and scoop them and send them straight into their mouths. The cry of the jackals is frightening for the unfamiliar, but for us it heralded the arrival of sunset.

My favourite was history and I made attempts to include the 1000 year old maritime history of the place that we were inhabiting in our loosely stitched curriculum. I took my children on this journey of research and discussion which included field visits to Dutch forts, studying of inscriptions and maps, and the ability to sift historical facts from local myths. As part of this effort we met local historians who introduced us to epigraphy, the study of ancient inscriptions.

The soil was laterite and very hostile for a typical vegetable garden. The only plants that would fully grow in our garden were the papaya, green chilli, and lemon. But huge platoons of monkeys would lay siege to our kitchen and devour all the papaya including the tender ones.

Our house was perched at a height with a fairly good view of the sea beyond. Hence announcing the arrival of the rains as they cross over the sea to the land was of immense importance to me. We had to protect the clothes that had been put out to dry. Watching the clouds shed the rain over the sea from the land was an amazing sight to all of us.

The entire curriculum for the two years was a heady cocktail of home science, sea swimming, wildlife biology, and history based on archeological evidence and field geography. We learnt from each other during this period, they learnt from my experience and I from their fearlessness, zest, and joy of living.

The excessive emphasis on formal schooling snuffs out curiosity and the inner spark in children to learn from nature. My attempt was to make the world my classroom where I learnt with as much curiosity as my students. The clear winner among all the subjects in my classroom was the joy of life.