While interacting with science as a discipline, my role and connection with the subject changed over the years – from being a school student to studying at university, from being a secondary school science teacher to a university science teacher educator, from being a research scholar in the area of science education to a curriculum developer – but some questions continued to prey on my mind. I wondered what kind of pedagogical approaches are conducive to effective teaching-learning of science in classrooms? What spaces are afforded to classroom talk in the science teaching-learning environment? What roles and purposes are served by classroom talk in science classrooms? And is the learning any different in classrooms that have different patterns of classroom talk?

Role of talk in science classrooms
Mortimer and Scott (2003, p. 1) pointed out that “the key feature of any science lesson (…) is the way in which the teacher orchestrates the talk of the lesson, in interacting with students, to develop the scientific story being taught”. I highlight some of the major “works” performed by classroom talk in building the scientific story in science classrooms. 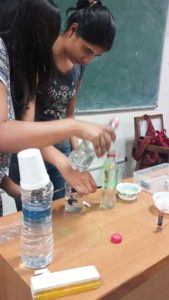 Children come to classroom with a well-established body of prior knowledge structures. Children hold strong conceptions about various natural phenomena before they formally encounter them in the science classrooms. These alternative conceptions may, at times, be in striking contrast to the school (or formal) science view. For instance, children believe that the earth is a flat surface in-spite of being taught about its spherical shape in classrooms. All the more, it is observed that students reproduce correct scientific explanations in examinations while keeping their alternative conceptions intact. The question emerges why this is so. Why are alternative conceptions not being replaced by scientifically valid or accepted worldviews?

One of the possible reasons seems to be the lack of convincing argumentation occurring in classrooms. Often, the teacher works diligently to provide packets of information to learners without exploring the learning pathways being adopted by them. Our highly structured classrooms, where a culture of total silence is often celebrated, hardly provide any space to engage students with their developing ideas and help them overcome misunderstandings.

Research suggests that meaningful science teaching-learning not only requires enlargement of information but also reorganization of existing conceptions, that is, conceptual change. For conceptual change to occur, teachers must encourage students’ verbal explanations and their questioning, criticizing, evaluating, and also writing to support thinking and communicating with other members of the learning community.

2. Discuss everyday use of words
Children have their own unique linguistic toolkit which has been developed upon social interaction in different contexts. In order to modify students’ spontaneous concepts to arrive at scientific concepts, it is imperative to change their understanding associated with colloquially generated words. For instance, take the term ‘animal’, in biology, the class of animals includes not only cows and dogs but also humans, fish and ants. In contrast, ‘animal’ in English language will not refer to humans, fish, and ants. The concept of ‘force’ in physics is something that produces acceleration in a body of mass. The same term in its ordinary use in English can refer to something as an adjective or a verb too, e.g., ‘He presented his arguments forcefully,’ or ‘They forced children to join the group.’ This is very different from its scientific usage. ‘Food’ in everyday use can be used as ‘food for thought’, but in science it means only something that provides nutrition to the body.

3. Develop science-as-practice
Over the years there has been a steady shift from viewing science teaching from the frame of ‘science-as-knowledge’ towards ‘science-as-practice’. This ideological shift has direct implications for science teaching-learning in schools pointing towards a movement away from mere passing of scientific cannon of information to orchestrating dialogic knowledge-building processes where students can engage in the processes of argumentation, observation, justification, analysis, communication and refinement of ideas. By engaging in classroom talk, these skills become central to classroom practice rather than being exclusively practiced in laboratories.

Taking into account these views, it is clear that the classroom must become a hub for lots of active interchange of ideas as the Nobel Prize – winning chemist and peace activist Linus Pauling noted
“The best way to get a good idea is to get lots of ideas”

And classrooms can become springboards for innovative ideas if and only if young learners are given adequate opportunities to speak their mind out and engage with each others’ worldviews in a non-threatening environment.

The author is an Assistant Professor in the University of Delhi. Her research interests lies in science and mathematics education, teacher education and educational assessment. She can be reached at garima1agg@gmail.com.