Mathematics was a challenging subject for me in school. While some of my friends were able to solve mathematical problems in a jiffy, I used to struggle and often sought out the teacher’s support. I managed to do well academically because of sheer persistence but never developed a love for mathematics. Perhaps the reason behind this was a lack of understanding about its place in my everyday life. It was something that just had to be done. I think my relationship with mathematics might have been different if I had known why it was on the school timetable.

When I read the Draft National Education Policy published by the Government of India’s Ministry of Human Resource Development in 2019, I was struck by a recommendation that the mathematics curriculum should include “regular activities that explore connections between classroom mathematics and real-life mathematics.” It was heartening to note the emphasis on getting children excited about mathematics and to channelize their excitement towards cultivating “logical skills that are so critical throughout their school years and indeed throughout life.”

I wanted to know more about how this could be done and that is when I stumbled upon a booklet titled A Guide for Integrating Issues of Social and Economic Justice into Mathematics Curriculum authored by Jonathan Osler in 2007. It is free to download from radicalmath.org, “A resource for educators interested in integrating issues of social and economic justice into their math classes and curriculum.” If you feel intimidated by American spelling and references, be patient and you will soon learn how to sift out the ideas that are relevant for your students. 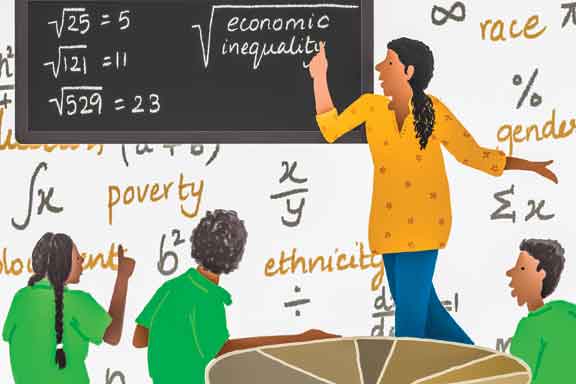 Social justice mathematics is appealing to me because it answers a question that I have held in my mind for a long time: Why do I need to know this? It pulls me out of my own experience of mathematics as a subject that was all about memorizing and applying rules that did not make sense to me even if they made sense to the teacher and to some of my peers. It helps me appreciate the connection between mathematics and problem-solving skills at large.

How can a mathematics curriculum incorporate issues related to social justice? There are multiple examples and one of those has to do with “studying probability in the context of a unit on how the lottery increases the economic divide between rich and poor.” According to Osler, such a unit can enable students to learn not only the mathematical skills they need but also about economic inequality in the society they live in. They can use their mathematical knowledge to brainstorm ideas about solving real-world problems.

What opportunities can be carved out in your school for this kind of learning? Look carefully at the news reports you are reading and make a note of the numerical data that can be used in your mathematics class to hone skills such as critical thinking, logical deduction and quantitative reasoning – all of which are mentioned in the Draft National Education Policy of 2019. Osler’s examples include defence budgets, worker salaries, population growth, racial profiling, waste disposal, predatory lending, etc. How do you feel about designing mathematics classes using numerical data about casualties, disease prevention, food distribution, and economic losses, being gathered and circulated in the context of the COVID-19 pandemic?

If you are wondering why mathematics teachers should concern themselves with social justice, this is what Osler has to say: “Math was behind the development of nuclear weapons. It is used to maintain an economic divide between a handful of wealthy, White people and the billions of poor people of colour around the world. It is used as a rationale for depriving people of access to cheap, life-saving drugs. So my question is: what good has the progress of mathematics as an intellectual discipline done for people?” Osler believes that if mathematicians had been trained to think about social justice, there would be less suffering in the world. 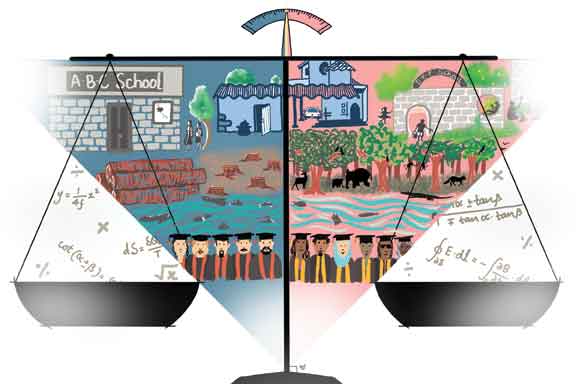 What is important to note here is the author’s absolute insistence that students should not feel short-changed as far as the mathematics content is concerned. Denying young people the opportunity to learn mathematics because the teacher is more interested in discussing certain social issues is unacceptable to him. This passionate stance comes from his awareness that mathematical literacy is often a gateway to opportunities for higher education. Without it, they are unlikely to perform well on standardized tests for admissions.

There are other questions that you might want to think about as an educator. How would students’ parents respond to this approach to learning? What could be done to ensure that students do not end up feeling helpless in the face of systemic problems but adopt a solution-oriented lens? How would assessment capture the skills and content knowledge you are looking to test? What could be some avenues for students to put their learning into practice and see tangible change in their communities? How can you prepare them to think critically without indoctrinating them with your own belief system?

Osler also recommends a few educators and scholars that you could look up if this mandate of integrating issues of social and economic justice into the mathematics curriculum has caught your interest. These include Rico Gutstein, Bob Moses, William F. Tate, Danny Bernard Martin, Arthur Powell, Marilyn Frankenstein, Bob Peterson, Gloria Ladson-Billings, Paulo Freire, and Henry Giroux, amongst others. I would add Sara N. Hottinger, Margot Lee Shetterly, Anita Wager, David Stinson, Rochelle Gutiérrez, David Richard Wagner and Parvin Sinclair to this list. That is a lot to get you started. Enjoy!

The author is an educator, writer and researcher who is deeply interested in social justice issues. He has an M.Phil. in English Language Education and several years of experience in facilitating workshops with students and teachers. He can be reached at [email protected].