One fine morning I was standing in the huge campus of a reputed English medium school in Jalandhar to be interviewed for a teacher’s position. Oh I so wanted to be a teacher! The large number of candidates that had arrived in response to the school’s advertisement was actually astounding. Did so many young people (and some old), especially the women, want to be teachers? With time to kill, I got talking to some of the other applicants. Why did they want to be teachers? Most of the applicants had completed their higher education. After their dreams of getting ‘good jobs’ in banks, the railways, the civil services, as doctors and engineers did not come through, they seemed to have settled for the ‘easy to get’ job of a teacher!! It appears that the spread of private English medium schools to every nook and cranny of the big cities is a sort of relief to the unemployed youth, especially the women who believe that teaching will help them manage their professional and personal roles with ease.

Sitting in the campus, I now began to wonder why I was there. Why did I want to be a teacher? Was I really interested in learning with the young creative minds? Was I aware what it entailed to be a teacher; my role/my responsibilities; did I have the ‘right’ attitude to be a teacher? Upon reflection I realized teaching wouldn’t be my cup of tea. But by the time that realization dawned I was already standing in a queue, for the interviews had begun.

A panel of five members and the school principal was waiting for the interviewees. The large number of candidates posed a challenge to the panel. How were they going to interview so many of us in one day! Well, I didn’t have to break my head for long. All the candidates who had applied for a specific subject (science/maths/social science/English and yes arts and music too) were put into groups of five or seven depending on the number of applicants. Now the real drama was about to begin. This was a group interview and when it was my turn to face the panel I got confused. Was this an interview to select competent teachers or a Kaun banega karorpati fastest finger round? The group of ‘would be teachers’ was pelted with questions, predominantly information based, and the smartest folk had to quickly raise their hands to indicate that they had the ‘right’ answer, which of course had to be the correct one also! 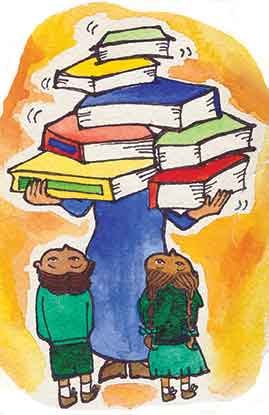 The panel included trustees of the school who were doctors, builders, other professionals and an educator (the principal). They were asking questions, rather testing the general knowledge of the individuals seated in front of them; and this had nothing to do with assessing the candidates for their ability to be teachers. I was one of a group of seven people. Some of the questions that were asked: What is the process of blood clotting? (this question caused every drop of blood in my body to freeze!). I raised my hand as quickly as I could to win the fastest finger round. Alas! I couldn’t describe the process of blood clotting! The builder asked, how would you control (emphasizing) unruly children in the classroom? Again the doctor, ‘which is the smallest bone in the human body?’ Two members in our group, who were also the smartest (in raising their hands quickly!), were up to the panel’s satisfaction as they described the process of blood coagulation and named the smallest bone in the human body. The interview went on for I think 10 minutes and by the end of it I knew the results!

I did not get the job. What bothered me was the way the school decided to choose its teachers; teachers who are so important in the lives of our children. The questions that the panel asked largely focused on measuring the breadth of the candidates’ knowledge and did not assess their ability to become teachers. What did this school expect from its teachers and eventually from its children? Does one select teachers from a quiz game?

The national curriculum framework envisions a curriculum that dissolves classroom boundaries and brings in the real world, the child’s world. Schools are meant to provide a learning environment and teachers are to be fellow learners and facilitators in the child’s journey toward knowledge. Very laudable objectives indeed. But in reality not much is expected from teachers, only that he/she completes the textbook. Similarly with the children. The existing education system seems to believe that being able to recall information is adequate evidence of knowing. Knowledge is equated with storing plenty of information in the ‘black box’.

From my rather disastrous interview, I came away with these questions. I’d be happy if the readers too could reflect on them. What should the nature of the assessment be to test the knowledge/skill/attitude of prospective teachers? What role do you see for yourself as a teacher in the school education system? What are your assumptions regarding the nature of human knowledge and human learning? What is your understanding of the nature of the discipline you are going to teach? What is your understanding of the role of education in an individual’s development and its relation to the development of a society at large? How do you see your role as a teacher playing out in the lives of young children? As a teacher, what kind of experiences would you like to give your children to cherish? How would you respond to the emotional needs of the children? I think our answers to these questions will reflect our preparedness to be a teacher, to own responsibility and to play a crucial role in the lives of little children. The theory of education and learning has a direct relation to the vision of a teacher and the system’s expectations from her/him. At the policy level, the vision of the teacher has been revised, however, in reality this vision seems far away, too far away. A lot of debates, discussions, and research studies are being undertaken on developing teachers as autonomous and reflective practitioners. However, it seems that these debates are confined to a specialized group of intellectual community and these discussions are unable to penetrate places where they will actually make a difference. Let us all collaborate to make our schools places of actual learning and free our teachers from needless expectations to make a better tomorrow.

The author is associate fellow at Digantar, an NGO based in Jaipur. She has earned her masters in Life Science, Social Work and Education. Her interests lie in psychology, nature, and Pedagogy of science. She can be reached at singh.vandana6@yahoo.com.