I have often asked myself the question “what would an inclusive school really look like”? The answers vary from something as basic as “one in which the teacher doesn’t discriminate against any child based on gender, caste, or religion” to “one in which all children are being supported into truly flowering to the best of their potential”. These are, in a sense, not very disconnected. Rather they are just different parts of the spectrum of expectations we bring to the classroom.

As I started investigating this idea, I realized that in order to understand how we can create inclusive schools, it is important for us to understand the various sources of exclusion, their root causes, origins and history and their current manifestation in practices in schools. This analysis could perhaps lead us in the direction of understanding what could be done to establish truly inclusive schools.

In the following three part series on inclusive schooling, I will present some of my views on this subject. Each article will examine, one of the following sources of exclusion – religion, caste, and gender. I will focus on their manifestations in practice in the school and the important questions they raise for school reform in our country. My objective is to generate discussion and gain greater clarity on some of the key issues that we confront on a day-to-day basis as we work in thousands of schools across the country. This is the first part on Religion.

I begin with religion simply because it is one of the most tangible sources of exclusion/inclusion with its symbolism on open display at multiple locations in multiple ways. Religion may or may not be the most important source of exclusion that one encounters in schools but it is definitely an important one since religion has a great deal to do with the identity of a person in Indian society. Is it inescapable for us to have religion in our schools because it is such an important part of our society? As I travel through a north Indian state I live and work in, I see pictures of Saraswati, Ganesh and a host of other Hindu gods plastered all over every educational institution – from the DIET (District Institute of Education and Training) to the BRC (Block Resource Center) to the school. I wonder how we can call ourselves secular when the religious symbols of one religion dominate all our so-called “secular” institutions. 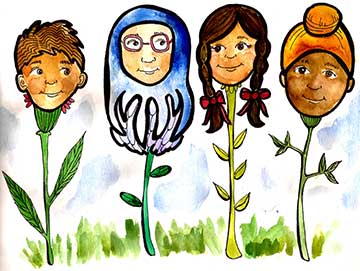 One line of argument taken by a number of people who defend this dominance is that people who belong to minority communities “don’t mind” these symbols being displayed in the school. However, the questions that immediately come to my mind then are a) Do they really not mind? Or do they not have any choice but to accept this situation? And b) is that really the question – whether they mind or not? Or is it a question of whether this practice is contrary to our stated belief in secularism?

To begin with it is important to understand what we mean by secularism. In India, the popular interpretation of secularism is that of sarvadharmasambhava or equal treatment to all religions rather than dharmanirpekshta which means separation of religious activities from those of the state. My interactions with hundreds of teachers and head teachers have repeatedly pointed to the sarvadharmasambhava (or equal treatment to all religions) understanding of secularism being the predominant one.

Now, ideally, as is laid down in the Constitution of India, I would advocate the dharmanirpekshta or “separation of religion and state” interpretation for all government schools. This would mean that there should be no religious instruction in any school activity in all government schools. But what I see in practice in schools is neither dharmanirpekshta (which is obvious from the amount of religious content present in a number of school activities) nor sarvadharmasambhava (which is evident from the unequal presence of just one particular religion in the cultural life of the school). Therefore, I am forced to ask myself – when we display religious symbols in our government schools – are we separating religion and the state-run school? When we begin the day at all these schools with a prayer from the dominant religion or only celebrate festivals of a particular religion, are we giving equal importance to all religions? In some insidious way are we not saying that it is okay for the dominant religion to be practiced openly in a public institution while others have no choice but to comply?

Now some might argue, what difference does it make which prayer one recites at assembly in the morning? Many children who come from Hindu families attend Christian missionary schools and say those prayers every morning. This didn’t seem to cause any problems so why can’t children in government schools recite Hindu prayers? However, I can’t help but observe here that those who do attend these schools are different in many respects. First, they come from more socio-economically privileged backgrounds where the home provides a strong sense of identity. For children from privileged backgrounds they see the power this privilege wields all around them all the time. Often they have parents who inculcate a sense of identity in them through the books they read, the people they meet and activities they indulge in. They have wide exposure that gives them a sense of reassurance about their privileged place in society. School is a secondary source of developing values and identity for them. And it usually serves to reinforce this sense of entitlement and privilege. On the other hand, in the unequal power relationship that is usually prevalent in government schools it is the sense of marginalization of children that is likely to be reinforced.

Second, the schools privileged children attend are private, and not state-run, schools. These, I believe, make the crucial difference between why such practices do not violate the “do no harm” principle in that case but are doing a significant amount of damage in our government schools. The same kind of thinking that allows us to tolerate these practices in our schools also allows us to tolerate other forms of dominance in our society. In this case the dominance is by the majority religious community who are not forced to think about the uncomfortable issues this dominance raises because it doesn’t affect them. But dominance (and therefore exclusion) can have other sources as well – caste and gender are some others I will talk of in subsequent articles in this series. 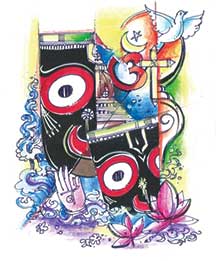 In this situation, what happens to the narratives of minorities? They are largely absent from the state-written and prescribed textbooks. And this absence in the books is reinforced by the narrative of minorities being absent from all practices of the school. However, the contributions of these religious minorities to the building of our society can’t be denied. So how can these contributions be given space for expression and translated into something visible in our schools?

To return to our discussion about religion and state-run schools, an open display of religious symbols is just one of the practices that I have talked about here. What are some of the other practices where it is accepted that a covert endorsement of the hegemony of one religion is not violating the principle of running a truly secular and inclusive school and education system? Over the last couple of years I have spent a large amount of time in training programs at all levels of the government education system. Each day the first session of training would begin with Saraswati vandana. A suggestion that we sing a secular song instead was rejected outright. One of the groups we were training consisted of 27 Hindus and one Muslim. How did she feel as this was happening, I wondered?

On another occasion, I found myself extremely uncomfortable as I was invited to participate in Saraswati puja to celebrate Teachers’ day. Since I disagreed with the idea that the best way to celebrate teaching and teachers was to do a puja, I politely declined to participate. But I still had a nagging feeling of discomfort. The majority of people in the room still continued to believe that what was happening was perfectly acceptable. In this scenario was it possible to bring up the fact that this practice was not secular and therefore something that shouldn’t be done in an educational institution?

On a lighter note, I couldn’t help but laugh out loud when a science teacher who was asked to explain the concept of convectional rainfall to the children in his class said, “The water from the sea gets converted into air and then rises up and flies in the air just like Lord Hanuman.” The scientific concept of evaporation easily explained with the help of mythology.

The anecdotes shared here are just some of the many I can recall at the moment and from one particular state. There are numerous examples where the culture of one community is conflated with Indian culture. Maybe you can add your own set of experiences to this list? But each one of the practices I have described has serious implications for the messages that schools are sending to our children and for the kind of society we end up with and therefore it strikes me as important for us to have a discussion about this further.

Some important questions I am grappling with are: What are truly secular schools? Are they schools in which absolutely no religious symbols are on display and religion is not talked about in school? If not, then what else? If display of religious symbols and practice of religious rituals is allowed then who should decide what can or cannot be displayed, practiced and through all of this covertly endorsed? This question of who decides takes on great importance in a democratic society since often religions contradict each other in what they say about concepts such as equality, liberty and rationality; and all these are fundamental to developing the critical thinking abilities of children along with developing compassion for and understanding of other human beings.

If we are to bring about social change through our education system how do we view this display of religious symbols all over our institutions? Shouldn’t we examine and try to change the culture and practices in schools? What do we believe can be effective ways to change this – both the symbolism and the mindset it represents?

The author has worked with the government education system in India for the last seven years. This has been her second “education” after growing up in a home with two teachers for parents, studying in an alternative school, an Indian liberal arts college and then in the United States. She can be reached at aditi.t@gmail.com.

Is there a place for religion?
Mini Krishnan

Can tolerance be taught?
Malini Seshadri

All these articles appeared in the Teacher Plus issue of August 2013.