It is often quite difficult to know just what to do when children misbehave at school. On the one hand, if the teacher does nothing, the child thinks he can do whatever he likes. On the other, draconian punishments can lead to confrontation, resentment, and constant struggles. An angry ‘telling off’ just makes children defensive and unresponsive. Another important consideration is that bad behaviour also creates a bad atmosphere for the rest of the class, whose concentration is interrupted when the teacher has to constantly spoil a happy atmosphere with reprimands. It is in the interests of those children who want to work that bad behaviour should be stopped. It’s not fair otherwise.

So how can we come up with consequences for bad behaviour that actually have a positive effect?

I am not talking about punishments, such as “you have been naughty so you will stand in the sun with a brick on your head.” No, I am talking about cause and effect. The cause is disruptive behaviour. The effect must be directly linked to the behaviour, and have the result of modifying the child’s behaviour in such a way that it does not negatively affect the child’s desire to learn. Remember, children will learn much better if they are not acting out of fear, but out of their own motivation.

Here is an example of what I mean. Let’s say Mohan has been unfocussed and chatty during today’s lesson. The teacher might say: “Mohan, I have had to speak to you three times today about disturbing others. I want you to come to me at the beginning of lunchtime so we can talk about this.” (I have found it very effective to have the child come before he eats lunch). When the child comes, he is asked why he thinks he is there. Then he has to sit still and silently for five minutes to think about it. Every time he moves or speaks, the five minutes start again. At the end, he will say why what he did is undesirable, and whether he will do it again. Through all this the teacher remains calm and warm. 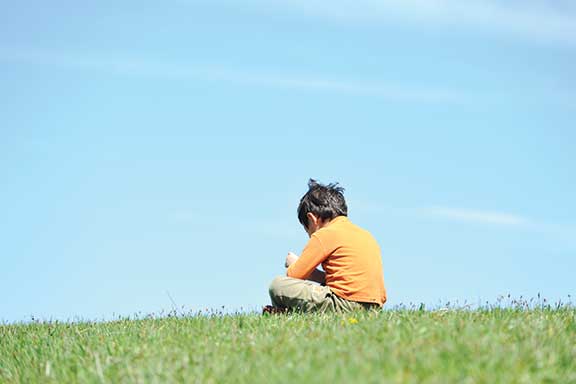 What we are doing by making the child sit still and quiet is bringing consciousness of the misdemeanour out of the dead area of ‘knowing’ (the child knows very well that what he is doing is wrong) into the physical body – the mouth and limbs – by a conscious act of will. The child now has the choice in class: he can either misbehave and spend five minutes of lunchtime with the teacher, or he can make an effort to control his mouth and limbs. This element of choice is the important thing. Of course, the student is choosing to behave because he doesn’t want the consequence. Isn’t that what we all do all the time? If we have to choose between two things, we choose the one which has the most favourable consequences (for us or others). So we are in fact teaching an important lesson: before doing something, think hard about the consequences and make a deliberate choice – not just what you feel like doing at the time. Thus, he is learning self-control.

In time, the expectation is that the teacher-facilitated self-control (reprimands) will gradually be needed less and less, and full self-control will become a habit. I have indeed observed this to be the case.

It is helpful if the child knows that certain actions will invariably have certain consequences. I have adopted the familiar technique used in football matches. The first time a student ‘breaks’ the agreed classroom norms (e.g., chats when someone else is talking), he gets a yellow card. That is a warning. The second time, he gets the red card. That means that he will reap the consequence: instead of being sent off the field, he will spend five minutes of his lunchtime thinking about his behaviour, as described above. The beauty of this technique is that the teacher doesn’t need to disrupt the class with verbal reprimands – she doesn’t even need to say the student’s name (disruptive children often love to hear the sound of their own name). In fact, the teacher can even give out the card without stopping the flow of the lesson at all. Once the students know what the cards mean, it is surprising how that yellow card sitting on their desk in front of them, reminds them to control their behaviour.

The litmus test for any ‘punishment’ or ‘consequence’ is: does it work? Does my method of dealing with misbehaviour not only cause the student to cease doing what I don’t want him to do, but does it also encourage self-control? Does it leave the student resentful and sulky, or is the student subsequently more respectful (of the teacher and others), and more co-operative? Does my method lead me to become angry and frustrated, or can I remain calmly in control (of my class and myself)? Ultimately, ‘behaviour modification’ should not be simply to make life easier for me, it should also teach the young person how to reflect on their own attitudes, and how to weigh up possible choices of action in order to choose wisely.