Madras eye, Delhi belly, Oxford blue, Mexican wave, and American dream. You don’t have to be a rocket scientist to figure out that the first element in the expressions that have been listed is the name of a well-known place. It’s fairly obvious; the names just stare at you in the face. But sometimes, this connection is not so clear. There are many words which we use in our everyday conversation which have been derived from the names of places. Not everyone is able to make the link between the two; in fact, most people have forgotten about the place which gave birth to the word. In today’s column, I’m going to deal with some of these common words. 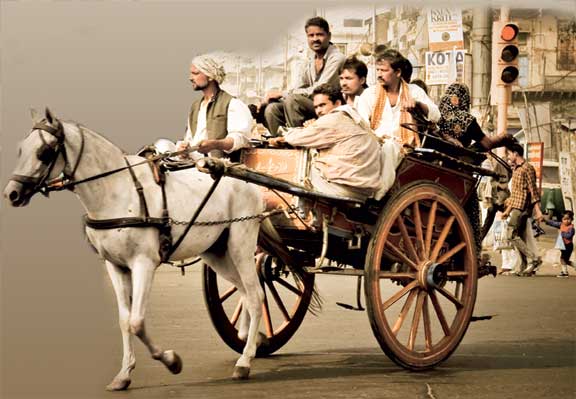 As teachers, we all ‘coach’ our students to do well in their exams. In the Indian context, our main job is to help them face the slings and arrows that the various Boards may wish to flying at them: we are meant to ‘carry’ the students through the various tests and exams. The original ‘coach’, however, was a carriage drawn by horses that ‘carried’ people from one place to another. The carriage got its name from a small town in Hungary where the vehicle was first made: Kocs (pronounced ‘coach’). When towns in different parts of Europe started making this carriage, people still referred to it as ‘coach’. As trains slowly replaced ‘horse drawn carriages’, ‘compartments’ began to be called ‘coaches’ because they too were being employed to ‘carry people’.

Nowadays, a hired bus is referred to as a ‘coach’: after all, like the train compartment and the horse carriage, it too ‘carries’ people. One thing that a bus carries, which the train and the horse carriage never did, is a spare wheel. People in India refer to this fifth wheel in a vehicle as a ‘stepney’: a word that is seldom heard in places where English is spoken as the first language. Native speakers of English refer to the fifth wheel as a ‘spare’. Where did the word ‘stepney’ come from? Did we Indians coin it? Stepney is actually the name of a street in Llanelli, Wales where spare wheels for the motorcar were originally made. Since the tyres were made in the street of Stepney, spare wheels began to be called “stepney wheel”. Later, it was shortened to “stepney”. These wheels consisted of ready infl ated tyres which could temporarily be clamped over a punctured wheel.

Wheels, carriages…. let’s move to something edible, shall we? People often say that one shouldn’t play with one’s food. John Montague, the fourth Earl of Sandwich, the man who is credited with having invented the sandwich, followed his mother’s advice: he didn’t play with his food. What he did was something quite different. He played and ate at the same time!

Many of us know that the sandwich was invented by an Earl who was addicted to playing cards. Montague was such an avid player that he made sure that the fellow participants stayed glued to their seat: he didn’t even permit them to take time off to eat! He had the food, which usually consisted of meat and bread, brought to him. In order to facilitate his playing, he put the meat between two slices of bread. It thus became possible for him to hold his food in one hand and his cards in the other. This allowed him to play and eat at the same time. Thus, the sandwich was born.

Sandwich is actually the name of a village in the county of Kent in England. The word literally means ‘village of sand’: a substance which we hope never to find in our sandwich! John Montague was such a well-known public figure in England that when James Cook discovered the Hawaiian Islands, he named them after the Earl and called them ‘Sandwich Islands’.

Living the American dream means making it big in the adopted country. When you think of America, the things that immediately come to mind are burgers, hot dogs, chips, soft drinks, and pizzas. It is strange that something in which the main ingredient is beef should be called ‘ham’. The word hamburger suggests that the meat patty between the buns is ham.

It is not, it is beef. Then why is a hamburger called a hamburger? Where does it get its name? As you have probably guessed by now, it gets its name from the city of Hamburg: a port in Germany from which a lot of people set sail for the New World (America). This city was famous for its Hamburger steak: it consisted of ground beef. Later, in the United States, when this steak was put between two buns/slices of bread, the name changed to ‘hamburger sandwich’. With the passage of time, it was shortened to ‘hamburger’. The ‘hot dog’ which is sometimes referred to as ‘frankfurter’ gets its name from the city of Frankfurt.

What about India? Have our place names become a part of the everyday lexicon? Yes, they have. India was famous for its textiles; therefore, it is not surprising that many of the places where textiles were produced have become part of the English vocabulary. ‘Calico’, the white muslin cotton cloth gets its name from the city of ‘Calicut’. Woollen sweaters and shawls are called ‘cashmere’: it is the old spelling of what we now call ‘Kashmir’. I could go on and on. But as Shakespeare said, what’s in a name?

S Upendran teaches at The English and Foreign Languages University, Hyderabad. He can be reached at supendran@gmail.com.