Imagine a space where government school children have the freedom to pursue and develop their interests every day without textbooks, exams, or marks…where they collaborate with each other and undertake practical experiments…where they initiate real world projects and interact with diverse people around the city…where they are provided exposure and guidance into new and different ways of living holistically!

Does this sound like Phunsukh Wangdu’s (Aamir Khan) school in 3 Idiots? 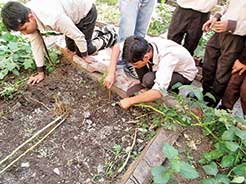 Since January 2015, one such space has been flourishing in the heart of old Delhi. This project, called the Creativity Adda, is being run in an all-boys government-aided school (classes 6-12) in Darya Ganj. The project, developed by Shikshantar Andolan in partnership with Commercial School and DS Group, is based on the pedagogy of self-designed learning and draws inspiration from Gandhi’s nai taleem, the democratic free school movement, the unschooling movement/homeschooling, and Swaraj University in Udaipur, Rajasthan which has been supporting young people to craft their own learning journeys.

The objective of this ‘unschool’ is to open up a daily space for kids to nurture their intrinsic motivation, creativity, self-awareness, self-discipline, confidence, as well as to explore a range of practical skills and new career options. It aspires to help them connect with their real selves, rather than lose their originality, core talents, dreams, and connections to their community and nature. Co-founder Ashish Tiwari says, “We believe that each student, by living a life guided by his creativity, passion and collaborative relationships, will be happier. This is what we are striving towards at the Creativity Adda. We want to support individuals who contribute to and make this world better by all their pursuits.” He goes on to add, “We are also trying to nourish the seeds of social entrepreneurship. This is very important given the growing unemployment in our country. We must understand that social entrepreneurship development is very different from traditional vocational training. ”

The unschool has been purposely set up as a parallel system to help shake the rigidity, dullness, and lethargy of the government system. There is a strong attempt to challenge the dominant school monoculture of competition, compulsion, fragmented knowledge, I.Q. labelling, textbooks, and certification. At the Creativity Adda, every child is seen as ‘intelligent’ and peer-to-peer sharing and collaborating is a very powerful form of learning. The project envisions the infectious learning spirit of kids as the spark to bring a transformative change in the overall school culture.

So far there are five hubs in the Creativity Adda: the Slow Food Junior Chef’s Academy and City Organic Farm, the Community Media Academy, the Designlab and Makerspace, the Music and Dance Studio, and the Sports and Fitness centre. There are 70 kids that attend the Adda daily. The unschool functions every day from 2-5 pm and the kids are free to decide what they would like to learn. Tiwari says, “Having this kind of block of open time every day is critical because it gives kids the space to go into one area deeply and explore things more freely. Building a culture of dedication, perseverance, and practice is important.” There is a team of facilitators for each hub and their role is to co-host the space and share different learning challenges. Interestingly, none of these facilitators has a B.Ed, and some don’t even have degrees. What they do have is a strong passion for their area and a willingness to listen to and co-create with the children. Creativity Adda believes that it is the kids who should take charge of their learning. Many of the activities have been initiated by the demand, enthusiasm, and curiosity of the kids. The Creativity Adda also invites several resource persons from time to time to engage with the kids and give them exposure to other creative projects like filmmaking, ultimate frisbee, candlemaking, toy making, mime theatre, animation, roller-skating, building a drone, storytelling, grafitti painting, etc. 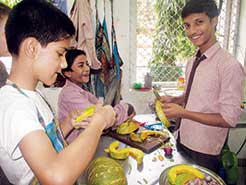 The idea behind this initiative is not just to expose the kids to different extra-curricular hobbies. Rather, the emphasis is actually on helping them see the full cycle of how they can take their learning to another level by creating a product or providing some service to the community. This methodology is called project-based learning and it’s an essential part of experiential education, which stresses learning by doing. Engaging in the real world gives powerful context and feedback for learning. For example, Labansh (class 8), Shashank (class 10), and Hemant (class 10) in the Slow Food Academy have learned more than 75 recipes over the past year. They are now helping manage and run the Slow Food Darya Dil Café in their school which is organized two evenings a month for their families, friends, and the larger Delhi community. The kids are directly involved in planning, setting up, researching and cooking new recipes, and in the overall execution of the event. They now have a good idea of what is involved in running a café and have come to learn of their strengths and weaknesses. Mrs. Himanshu Kapoor, organic chef-founder of C.Green Foods and resource person from Slow Food India, describes, “Food – how we grow it, what seeds we use, our relationship with the farmer and what we put into our mouths – is a major theme for India but pretty much ignored in our education system. We are losing our diverse food cultures. It is urgent that we share this knowledge with the next generation.”

The kids learning music have formed their own band, Allahaad. In addition to performing at the Dariya Dil Café, they have performed at several avenues outside the Adda and have hosted drum circles at other venues. All of the learning hubs try to get the kids out of the classroom and into real-life situations. The kids go on exposure trips, visit festivals and fairs as well as go for photo-walks in their neighborhood. Tiwari shares, “We want the kids to develop their roots and wings. We also hope that kids can see that there are many amazing new ways to earn a livelihood and contribute to the well-being of their communities and environment.”

In the Designlab and Makerspace, Moin, a student from class 9 who has the spirit of an inventor, recently attended a Drone Building workshop at the Adda. After the workshop, he came up with the idea of designing a drone himself. He was really surprised that a drone costs so much (approximately Rs.15,000), so he decided to design a less expensive jugaad version using waste materials. He designed and built his own prototype within five days for about Rs.50. He is yet to make his drone fly properly but he is working towards that with great dedication. Moin has been invited by private schools around Delhi to conduct upcycling workshops using many different waste products. Tiwari shares, “We have many kids, like Moin, who come to school only because of the Adda. The factory-school environment doesn’t understand them or support their various talents.” After being in the Adda, his family is slowly starting to appreciate their little inventor, and now supports him in maintaining a little workshop in his house.

Facilitator Vikram Singh says, “We believe the way to deal with struggling students is not to keep squeezing them with more tuitions as is happening all over our country. Rather, we must help them find what they are good at and what they love doing. This will increase their intrinsic motivation and improve their self-image which will give us positive changes.” He shares the story of Yogesh (class 10), who is passionate about playing the Djambe or the African drum in the Adda band. When he failed two subjects in class 9, his father asked him to stop going to the Adda and take more tuitions. Yogesh initially agreed. Then he slowly negotiated with his father to let him re-join the Adda. Now, he is working hard on his studies and finding time for his passion. His father is very happy with him. 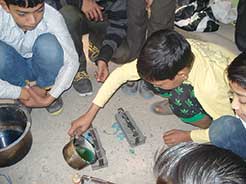 The Creativity Adda has witnessed palpable growth in many kids who have been regular in attending over the past year. The kids have opened up beautifully in the last one year and their self-confidence is much higher. They talk very freely and confidently with visitors at the Adda and also whenever they go outside to attend any events. They are gaining an awareness of what their real interests are and how they can constructively take them forward in the larger world. They are re-connecting with their families and diverse experiences in their community. They are developing significant higher order thinking skills. The non-competitive and non-judgmental space at the Adda gives them the freedom to try out several ways of doing a particular thing, make mistakes, learn, and then try again with some improvisations.

The project sees creativity as a key capacity for the future of the country. Up until now, this has been largely ignored or suppressed in schools. The biggest factor around the initial success of the project has been that it is open every day for three hours. Many private schools may offer such activities but these are usually limited to one or two periods per week.

While this is the first such unschool prototype in a government school, there are some excellent community learning centers (mostly for low-income students) such as Manzil, Karm Marg, Prithak and Adhyan around Delhi, which provide a sense of community and support for students to develop their passions and practical skills. The Creativity Adda recently hosted a gathering called Dhamaal Chaukadhi: A Peer-to-Peer Learning Manch which brought together 200 kids from these centers to share their talents and develop new friendships. The event was organized with the understanding that kids are the best teachers for each other.

The Creativity Adda is an innovative start-up that has been developed with the support of CSR funds. It highlights some key dimensions necessary for nurturing creativity: project-based learning, peer-to-peer learning, time for free play and exploration, empathy and emotional healing, multi-disciplinarity, and space for positive learning from failure and mistakes. As the project unfolds, a few early adopters – government school and private school principals – have started to express their interest in it and discussions are underway for developing Creativity Addas in their institutions. Much of the future of the spread of models such as the Creativity Adda will ultimately depend on how ‘creative’ our nation’s CSR departments are willing to get to respond to the deep crisis facing the education sector.

But for now, Tiwari remarks, “We are trying to open up new frontiers for who we learn from, how we learn, where we learn, when we learn, what we learn. We are slowly gaining the trust of parents and teachers. It is exciting to see so many new possibilities emerging every day for the kids of Delhi-6.”

Gagandeep Singh started his career with behavioral training for corporate and educational institutions. From there, due to his inner striving, he changed the course to work with development organizations. He has been involved with several NGOs operating in the field of individual and social development in Delhi NCR.

Manish Jain is the co-founder of Shikshantar Andolan and Swaraj University. He is one of the leading voices of the homeschooling/unschooling movement in India. He is interested in unlearning, gift culture and jugaad innovation. Visit www.shikshantar.org to know more about his work. He can be reached at m.jain@rocketmail.com.