Children who do not finish the food served on their plate are often reminded by their parents not to waste food as there are millions of poor children in the world who do not get sufficient food to eat. Who are these poor people? Why are they poor? How can one bring them out of poverty? An attempt is made to address these questions in this article. 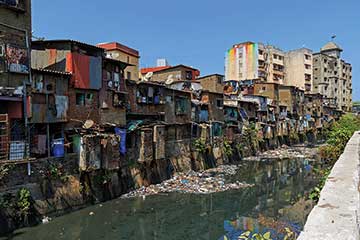 What is poverty?
Poverty is a concept that describes the condition of people suffering from some disadvantage or other. There is disagreement, however, on what these disadvantages are. Lack of income to meet basic needs such as food, clothing, and shelter is considered as the main disadvantage. However, according to Robert Chambers, poor people perceive the lack of assets, physical weakness, and isolation as their main disadvantages.

A distinction is often made between absolute and relative poverty. The former implies a severe deprivation of basic necessities, while the latter denotes poverty in relative terms. Poverty can also be persistent (chronic) and transient. If transient poverty is not tackled in time, it can persist for a long time. The poor are not a homogenous group and they include marginal and small farmers, agricultural labourers and informal sector workers in rural and urban areas.

What are the causes for poverty?
Scholars note that endowment, production, exchange, and consumption failures in the society result in poverty. Let us understand each of these failures.

Inheritance of property is also an endowment. You are less likely to be poor if you inherit property as you are economically better off because of the inherited property. The rules of inheritance differ across societies, but are generally unfavourable to women.

Physical and/or mental disability is another endowment failure. Children born with disabilities are more likely to be poor. Disability is an important cause for poverty, social exclusion, and inequality. Studies show that the disabled tend to be more illiterate and unemployed, thereby remaining poor for many generations. 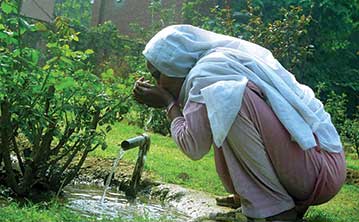 Production failures
Even if a person has citizenship, inherits property and is physically able, poverty can still result due to production failures such as poor physical environment and lack of education.

The state of physical environment (which includes soil, climate, and water supply) is important for farmers, livestock herders, etc. Agriculture provides employment and income to the vast majority of the rural poor in the world. With close to 40 percent of the total area in the world being agricultural land, land quality including access to irrigation is important. If the agricultural land is of poor quality, households depending on such land are more likely to face frequent crop failures, uncertain income, and poverty.

Climate change threatens to adversely affect the poor worldwide. It is expected that climate change is likely to lead to increased frequency and magnitude of extreme weather such as droughts, floods, and storms. The impact of climate change may vary across different countries; but, it is likely to result in fluctuations in crop productivity and uncertain farm income, reduced employment opportunities to farm workers, reduced access to drinking water, negative effect on the health of the poor, and adverse impact on food security.

Skills or education improve employability and productivity of the working poor, and facilitate a smooth transition from education to work among the youth, thereby reducing poverty and addressing the problem of social exclusion. Research carried in several countries over a period of time has provided conclusive evidence that better educated persons earn higher salaries and wages, experience less unemployment and work in more prestigious occupations than less-educated persons. Education and skills thus have a very good potential to help young people from the poor and vulnerable groups (such as rural poor, disabled persons, disadvantaged groups) escape the vicious cycle of inadequate education, poor training, low productivity and poor quality of jobs with low levels of earnings.

Exchange failures
Exchange failures include lack of access to markets and support prices, unemployment and low wages, and failure to secure claims on the state. We will discuss each one of these in the ensuing paragraphs.

Difficulties in accessing markets also cause poverty. Markets are the places where people buy raw materials required for their livelihood activities, sell finished products and buy food and other consumption goods. The rural poor do not have good access to markets because of distant location, high transportation costs, limited business and negotiating skills, and lack of organization among them. Lack of support prices for goods that they produce is another reason for poverty.

Unemployment and low wages also cause poverty as people are unable to get jobs that will provide them enough income to meet their basic needs. People do not get employment because of several reasons that include lack of access to productive assets, disability, poor quality of land, crop failures on account of poor physical environment, lack of education and skills and so on.

Another exchange failure is lack of state support. Having citizenship is useful only in some countries that provide adequate benefits to citizens. People living in poor countries often experience poverty as governments fail to provide education, health services, economic opportunities, social security, environmental protection, law and order (and judicial system administering the same) and infrastructure.

Consumption failures
Even if a person receives sufficient income from the cultivation of land and undertaking a non-agricultural job, poverty can still result on account of consumption failures such as indebtedness and vices (alcohol addiction or gambling). Indebted households live in poverty as the repayment of loans at exorbitant interest rates leaves such households with very little to meet basic necessities. Alcoholism among the poor perpetuates poverty as they spend much of their income on consumption of alcohol. 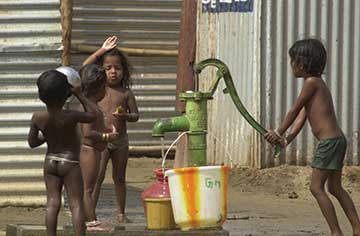 The incidence of poverty is less in states such as Kerala, Andhra Pradesh, Himachal Pradesh, and Goa. In states such as Chhattisgarh, Jharkhand, Manipur, Arunachal Pradesh, Bihar, Odisha, Assam, and Madhya Pradesh, the incidence of poverty is more. In these states, the proportion of people living below the poverty line is more than 30 percent as compared to the national average of 21.9 percent! Important reasons for higher incidence of poverty in these states include over dependence on agriculture, low growth rates (historically), lack of resources and industrialization, low literacy rate, lower per capita income and so on.

How to bring people out of poverty?
As stated earlier, the poor are not a homogenous group. This means that poverty alleviation strategies have to differ from group to group, and from region to region. So an important first step is to study the problems that they face so that these can be adequately addressed. Second, the government needs to improve access to assets among the poor. These assets include agricultural land, access to credit, improvement in health and education, provision of skills and so on. Land reform policy becomes important to promote efficiency among small farmers and tenants, and thereby improve their standard of living. Third, growth oriented policies in key sectors of agriculture and manufacturing have to be carried out. Fourth, basic health care (immunization, access to potable drinking water, sanitation) and education (school education, vocational skills) are essential for the poor to build their capacity to come out of poverty. Fifth, adequate and qualitative physical infrastructure (irrigation, transport, and communications) and support services (research, extension, access to credit) need to be provided so that the poor can make best use of their resources and human capital. Sixth, anti-poverty programmes such as public works to promote wage employment, provision of credit for undertaking income generating programmes, etc., need to be targeted well.

Discussion points
What do students understand by poverty? Tell them that for a long time now lack of income to meet one’s basic needs (food-clothing-shelter) has been considered as the main indicator of poverty. Is this the correct way of defining poverty? If no, what other indicators have to be taken into consideration and why?

Why is it that the central Indian states of Chhattisgarh, Jharkhand, Bihar, and Madhya Pradesh suffer from a high concentration of poor? What measures are to be taken to bring the people out of poverty?

Ask students to prepare a timeline on how slums have evolved over a period of time and identify the main characteristics of poor households. What are their views on the government’s efforts and methods used for slum clearing and/or providing support for better housing. They may also be encouraged to identify alternative methods to develop slums.

Initiate a discussion on what the hindrances are in eradicating poverty. What are their views on corruption as a main hindrance to poverty reduction? Can the students come up with ways to tackle corruption?

Debate
Is the Indian government doing enough to reduce poverty in all the regions and among all social categories?

Activity
Provide a list of projects that the government and non-government agencies are undertaking for reducing poverty in India? Which of these agencies is best suited to tackle the problem of poverty and why? Among the projects undertaken by these agencies, which one is good for poverty reduction and why?

The author is Professor at the Centre for Decentralisation and Development, Institute for Social and Economic Change, Bangalore. He can be reached at raja@isec.ac.in.