No, this story isn’t Taare Zameen Par part 2. Nor is it about a teacher’s absolute belief in a student. This story is about a boy named Waqar and a teacher who failed him. When Waqar came to Class 2B at MHB Municipal School for the first time, he was like any other child. Just that he was two years older than most of his classmates and was the tallest. When his teacher conducted a test to see which grade level he belonged to (most kids in class 2B were atleast 2 grade levels behind, which means that in grade 2 they only had the knowledge of a KG student), she found out that like most other students he too was 2.5 grade levels behind. But this didn’t deter the teacher, she was very enthusiastic when she started teaching him and she wasn’t going to give up so soon. She arranged for extra classes for students who needed more help. Every morning, ten students from Waqar’s class including Waqar came an hour early to school and sat in a corner of the dilapidated school building on a half-torn mat to learn phonics and basic math. Weeks passed but Waqar barely showed any progress. When his teacher met Waqar’s grandmother, she found that as an infant, he had fallen and hurt his head. Since then his comprehension had become slow as compared to other kids and he often forgot things.

A year after she heard the story, Waqar’s teacher forgot all about it. Waqar’s behaviour in class became intolerable; She felt he was being lazy and purposely didn’t pay attention. He would return his worksheets incomplete and most of the time his exam papers were blank. He was lost in day dreams all the time. When the teacher visited his house to talk to his parents, she realized that Waqar stayed with his grandparents. His parents had two more sons to take care of and didn’t want to be bothered with Waqar. His interactions with his two younger brothers was only in school. There could be so many reasons triggering Waqar’s behaviour, but nothing fitted well into the jigsaw his teacher was trying to solve, and she gave up on him. 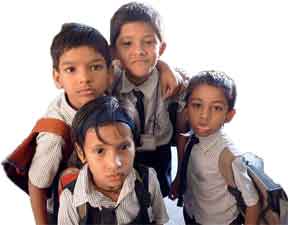 But things changed…. One day during a science lesson, the students were watching an experiment. To test their knowledge and observational power, the teacher asked a question. After six children gave the wrong answer, the teacher turned to Waqar. To her surprise, Waqar gave the right answer. This made the teacher so happy that she gave Waqar a chance to contribute in every science class. More often than not his answers were correct. And the teacher realized that he had an aptitude for science. Waqar’s inquisitiveness wasn’t restricted to science. One morning, during the ‘Talktime’ in class, he spoke about the field trip to Boriwali National Park. When the most “intelligent” kids could barely speak for 30 seconds without stopping or stammering, Waqar spoke non-stop for two minutes about what he had seen and learnt. The teacher had tears of happiness in her eyes. She felt sorry for not believing in him. She felt horrible for not having faith in her student.

That teacher learnt the lesson of hope and belief from an 11 year-old. That teacher is me. I, Ritika Didi, as Waqar calls me, gave up on him, long before I even started trying. I failed as a teacher, as someone Waqar believed in. But he reinstated my belief.

Waqar still submits blank papers and other than in science class, he is lost in class. But it’s not his fault. He suffers from dyslexia. But I know one day, some day, he will overcome it and make a lot of people realize his true potential… as of now he is enacting the role of a scientist in the class’ end of year showcase….. I will miss him when I leave the school a month from now……

The author is an ex-fellow from Teach For India and taught at a municipal school in Mumbai for 2 years. She is currently pursuing her MA (Education) from Azim Premji University, Bengaluru. She can be reached at ritika.chawla2010@teachforindia.org.