February 14, a day synonymous with love and affection: love for that special someone who brings meaning into our lives, and affection for those who have the misfortune of being in our orbit and don’t seem to resent it as much as they should. It is a day regarded with mixed feelings by Indians. Some roll the date around the tongue as if they were sampling vintage port, while others spit it out with a sort of frigid distaste as if it soiled their lips. It is a day when the atmosphere is supposedly charged with love; a day when men and women remove the heart from the cobwebs, give it a spit and polish, and present it to their beloved. It is that time of the year when couples, old and new, reaffirm their affection for each other by exchanging tokens of love – a red rose, a heart shaped box of chocolate, and a card oozing with sentiment. 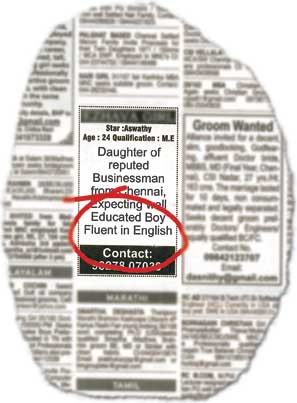 Yes, it is the day when love conquers everything, including common sense! Men, even the strong, silent type, in whose armour romance does not easily find a chink, often flip their lid and demean themselves by writing unreadable poetry. Who is this man Valentine who has plunged this world into a riot of emotions? No one is really certain. Some believe that he was a priest who lived in Rome in the third century. Apparently the Emperor of Rome, Claudius II, believed that single men made better soldiers than those who had tied the knot. To ensure that his army remained formidable and put the fear of god in the enemies, Claudius came up with a novel idea; he decided to outlaw marriage! Valentine, however, would have none of this; after all marriages were made in heaven. He believed that if young couples wished to plunge hot headedly into matrimony and spend the subsequent years in regret, then it was god’s will. So, instead of following the Emperor’s decree, Valentine decided to marry off the lovers in secret. When the king, whose IQ left much to be desired, became aware of the priest’s nefarious activities, he had his head chopped off. This is just one of the stories doing the rounds. Another legend has it that Valentine was a prisoner who fell like a ton of bricks for the jailor’s blind daughter. Apparently, he miraculously cured her of her blindness, and before he was executed, he is believed to have sent the girl the first official Valentine letter: he signed off on it with the immortal words, ‘Your Valentine’.

You may wonder why I’m writing about an event that takes place in February, a month later. I was informed by the wielder of the blue pencil that the cover story for March was about the importance of English in India. To understand this phenomenon, we need to look no further than the hoopla that surrounds Valentine’s Day. On February 14, the language used by people slightly soft in the head – self-proclaimed romantics – to declare their undying love for their beloved is (generally) English. It is the lingua franca; most of the messages that are sent or received on this day are in English. Valentine’s Day and English are inseparable.

How times have changed! In the past, when you wished to get married or your parents thought it was time for you to take the plunge, they did all the hard work. They poured through an odd assortment of horoscopes, shortlisted a few suitable candidates keeping in mind the family and educational background of the individual, and when the time was ripe, ambushed you with the terrible mug shot of various individuals whose faces might have easily found a home in Dr. Terror’s House of Horrors! Nowadays of course, members of the younger generation prefer to choose their own life partner, and the few that do go in for the traditional arranged marriage have a long list of desirable and essential qualifications that they expect their candidates to fulfil before they are shortlisted for the big interview. For the modern urban girl, it’s not enough if the ‘boy’ comes equipped with agreeable features, is well educated, earns a good salary, comes from a good family, knows his way around the kitchen, treats a woman as his equal, etc. She wants something more – she wants her Prince Charming to be fluent in English.

You may wonder why a man should demonstrate his ability to speak English well before a girl would consider being tied to him in bonds of holy matrimony. I talked to several urban girls in their early twenties about it, and this is what many had to say. According to Mala (all names are pseudonyms), a student doing her MPhil, girls gravitate towards men who speak eloquently, and speaking good English, in her opinion, is a definite “turn on”. Revathi, a writer for an online magazine agrees, and goes so far as to say that “a man who cannot speak English today is unattractive instantly”. If the girl finds the man’s English jarring to her ears, she is likely to park him unceremoniously in some obscure corner, and move on to the next candidate on the list. Geetha, another research student, says she would never consider marrying a man who speaks only his mother tongue; for her, this implies that he has never ventured outside his own state, and she prefers to be with people “who have studied outside their own state at least for some time.” Savithri, an editor in a publishing firm, echoes similar sentiments; she maintains that marrying a man who has never stepped out of his state is a “scary” thought. Introducing the ‘significant other’ to the members of one’s inner circle and getting their approval becomes easier if he is able to speak ‘propah’ English. Bhanu, an editor working in Baroda, says: “It would be a bit embarrassing when you introduce your guy to your friends and they start asking him questions in English and the guy keeps fumbling for words.” She wants her husband to be competent in English so that he can appreciate her jokes and her play on words. Revathi, the online journalist, does not see her husband as a decorative piece lying around the house, but as someone who will assist her in her work: “I would love to have a life partner who can comprehend, respond or challenge my work rather than someone who won’t push me to produce better articles that I write in the only language I know well.”