I never knew that the woods and the wild could be so adventurous until I ventured into the wild along with my students of class VIII. My experience of exploring nature’s wild beauty with the students was immense. I now realize that I never appreciated nature or its importance enough until I dealt with an English lesson, “The Magical Animal”, an excerpt from The Aye-Aye and I by Gerald Durrell (based on his journey to the Madagascar to save the elusive aye-aye, a lemur, from extinction).

As a part of Bhavans’ efforts to instill care for the environment and in response to the “green school” initiative, I encouraged my students to venture into “the wild” to learn about those creations of nature that are on the verge of extinction.

Showing the way ahead
Before sending them out to explore these questions, I showed my students a PowerPoint presentation on the aye-aye, as a clue to what they should look for and what kind of information they should gather. 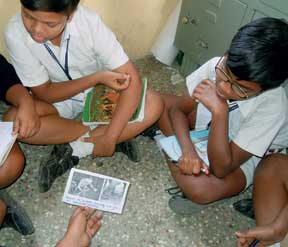 The presentation worked as a stimulus and my students really surprised me with their enthusiasm to explore in the most detailed manner. I gave them a blueprint of the project to help them forge ahead with their exploratory research work. During the project, I was always there as a facilitator, guiding, motivating and monitoring the students’ work.

What the students came out with after a month’s extensive hard work was highly commendable. Not only did they probe and search for various endangered species – their habitats, features, food, etc. – but they also analyzed the reasons behind these species becoming endangered.

Sharing with one and all
Their initial enthusiasm was so great that I decided to broaden the boundaries of the project. I divided the students into groups and asked each group to take up one endangered animal and gather as much information as they could about it. The idea was to put together all the information collected and share it with the entire school.

The road taken
The activity featured disseminating information found on various endangered species such as the ‘Grey Whale’, ‘Philippine Monkey eating Eagle’, ‘Kakapo’, ‘Greater Bamboo Lemur’, ‘Orangutan’ and ‘Tarsier’. The information gathered was conveyed through charts, posters, and narration. The presentations and information on endangered species were well received and led to interactions including questions and answers. Many students also gave suggestions as to how they would work to save the endangered species. Teachers also actively participated in the program.

The students also had a debate in class on whether animals should be caged. While most students spoke against this practice, some also spoke in favour, justifying it as a means to safeguard animals from the dangers they face.

Our toast to the wild
During this project we brainstormed for and found out ways and means to protect wild fauna and extenuate the causes that are playing a major role in endangering these wild lives.

Destination reached
I believe that this approach of going beyond the classroom opened the doors of their latent talent and creativity. The project also helped hone life skills – team work, decision-making, problem solving, and public speaking.

The author is a teacher at Bharatiya Vidya Bhavans Public School, Jubilee Hills, Hyderabad. She can be reached at imsanchita@yahoo.co.in.