A little more than two months ago (end of February), all of us were talking, and were very upset about the small child in class 4 who had been mercilessly beaten by her school principal for speaking in Telugu in school. There were many protests both in print and through mail. Quite a few of the protests, however, were about the physical beating that the child got, about the corporal punishment that was meted out. Many letters to the editor were written about this, criticising the beating and asking that laws be put in place to ensure that corporal punishment either be made a criminal offence, or that it be fined heavily, etc. Some others even went to the extent of stating that such teachers and principals who beat children be asked to step down from their posts.

I have no problems with any of these people or with any of the arguments made. I fully agree and will emphatically state that no child should be beaten for any reason in school. It must be made an offence, even a criminal one! There need be no second thoughts on this issue. However, what bothers me is that except for a few blogs by individuals, people did not seem to be horrified by the reason this little girl was beaten! Before writing this article, I did an extensive Internet search for reactions and responses to the news item. It disturbed me a great deal to find that there were no more than three blogs that complained about the banning of the use of the first language in school. 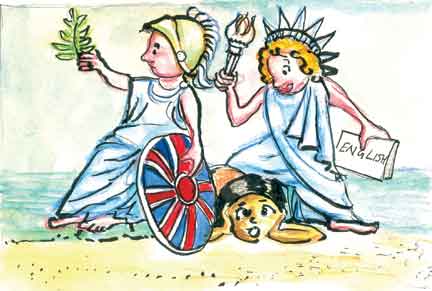 We do not know where this little child spoke in Telugu: inside the class, outside, in the corridors, or in the playground. If the ‘place’ was inside the classroom, (and obviously it was not the Telugu classroom) it is bad enough (there is no reason why a child cannot and should not use a language that he/she is comfortable with to either ask for an explanation or express herself in spaces other than the English classroom). But if that child had spoken in Telugu outside classroom space, and probably during recess or lunch, it is worse. Either way, we need to seriously examine our own language lives and ask ourselves what role that ‘killer language,’ ‘English’ is playing in our lives.

We cannot deny that English is the language of opportunity; it is the language of social and economic mobility in India. I would go so far as to state that it is also the birthright of every child in this country to be able to learn and use English effectively. But, it cannot be at the cost of the other languages that are a part of our lives. We do not want to become ‘monolingual’ English speakers who will learn to fulfill all our communicative needs through one language – English – and therefore eventually, ‘forget’ our other languages.

India is a country where at an official level we live and work with two, three or more languages. At an individual level it would be very difficult to find ‘pure’ monolinguals in our country. Most people speak at least two languages; many, three or more, and this is not something that is an educated elite phenomenon. It is grassroots multilingualism at the societal, official and individual level. This is the base on which our language education has to be founded.

A rule that says, “You cannot and should not speak any other language but English except inside the other language classroom,” is based on the belief that unless that one language is spoken all the time, it cannot be mastered! But we forget that our children hear Telugu, Hindi, and English, or Tamil, Telugu and English, or… (there are many combinations) and keep these languages separate in their minds and also learn them quite effectively.

If in our minds these many modes of communication live and exist comfortably and share common space, then how is it possible to ask the student to ‘ban’ one mode of communication for long periods of time?

Such an imposition is linguistic imperialism; it is colonialism being reinvented, a re-colonisation, in fact. We may have got our independence more than 60 years ago, but if we believe in ‘English only’ school spaces, then it means that somewhere we are still ‘beholden’ to the British and feel, like them, that two languages are a nuisance or a hindrance. 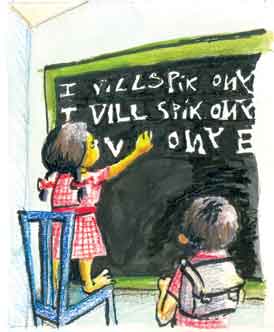 English teaching in a monolingual country may and can practice the ‘speak only one language’ formula. That is because other languages DO NOT EXIST, either societally or officially. Immigrants from India and other neighbouring countries (Asians) who migrate to the United Kingdom are forced to speak only English in their school space; in this context I do not have a problem because such children will be expected to fulfill all their communicative needs eventually through English. They have, after all, decided to live in an Anglophone country permanently.

To expect and demand that Indian children, living and studying in a language-rich multilingual country like ours, speak only in English inside school, all because it is an ‘English medium school’ is untenable and unacceptable.

The school principal who penalised the student should be asked to record her own language profile for a week to see how much of English and how much of other languages she uses in her daily language life.

Our lives are a many-textured holograph of dialects and languages. We switch languages to suit our needs; sometimes we do it to bond with someone, or in other cases because the idea is better expressed through that particular language. On some occasions it could be because the other person does not know the language we are speaking in…. If each one of us reflected on our own language use and documented the switch from one to another and its reasons, (and kept a diary) the page would fill in no time.

In spite of this we expect our children to become artificial monolingual users (and mind you, only in English) only because a set of teachers long gone (during the British raj) said so! We do need English but it cannot and will never be the only one through which we communicate. Our languages are like our Asoka Chakra: interwoven and linked, and that is how they need to remain.

The author is a Professor in the Department of Testing and Evaluation, EFL University, Hyderabad. She can be reached at gdurairajan@gmail.com.