As teachers we often think of ways to make our lessons relevant. Today, technology is ubiquitous so it seems only natural that we use technology in our classrooms. In this article, I would like to share with you how I use a tool called Edmodo, in my ESL classes. I’ve found that using Edmodo has helped students become more engaged in the learning process both inside and outside the classroom.

1. What is Edmodo?
In a nutshell it’s like a facebook page for your class. Edmodo is a safe tool with stringent privacy settings to allow students to communicate with each other: the only people who will have access to your class page are your students. Another great point about Edmodo is that it’s free and so very easy to set up. I can tell you that I am a technologically challenged person, so if I can set up a group, anyone can! For more information, please take a look at: http://www.edmodo.com/about/

Before you start using Edmodo for your class, two points need to be mentioned. For teachers thinking of using Edmodo in a Young Learners’ class, it is best to first give parents information about the tool and get their consent for their child to use it. Once this has been done, it’s then important to establish some rules for your class. As your aim in using Edmodo is to get students to practice their language, one rule may be that posts should use full sentences, and words are to be written in full. No “texting” language is to be used. Another important rule to set is that there is to be no bullying.

So far I have been using Edmodo in my adults’ Advanced English class. It is important to mention that in my class, Edmodo tasks were completed by students at home because we don’t have a computer lab at my school; however, there is no reason why Edmodo can’t be used during class as well. 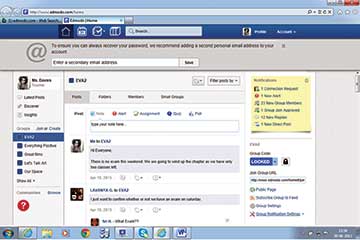 2. How can you incorporate Edmodo into your lessons?
The sky is the limit here. In my class, I have used Edmodo in the following ways:

3. How do you give feedback on language?
If students are posting information, then this information needs to be reviewed and corrected. I don’t correct every single error and I don’t specify who has made the error. What I like to do is at the end of each week, I go through the students’ posts and see if I can find common errors. I should at this point mention that I also note down great use of language to encourage and give credit. I type the statements taken from their posts and then give them to my students in the following class to analyze and self-correct. To make the activity more interactive, I allow students to self-correct in groups. I then provide feedback and explanations. You can get so much mileage out of their errors:

In conclusion, I have to say that Edmodo has made my lessons fresher, creative, and relevant. Because the tool allows students to post comments and interact with each other, they are more motivated and engaged in the learning process. I would encourage you to give Edmodo a go and see how it can make a difference to your class.

The author is a teacher-trainer with English Partnerships, a British Council Project. She can be reached at kpriyankadavies@gmail.com.