English is not foreign to most Indians. It is so common to hear English words interspersed with the local tongue so much so, that they do not seem like English words any more. They have become part of the local languages of our country.

In Chennai, pedestrians when asked for directions tell us: ‘Right-ikku turn pannunga.” If one were to ask them to use the Tamil equivalents for ‘right’ and ‘turn’, they would find it difficult to think of the correct Tamil words to replace them. And even if they did manage to, the listener probably wouldn’t understand the instructions given in chaste Tamil! 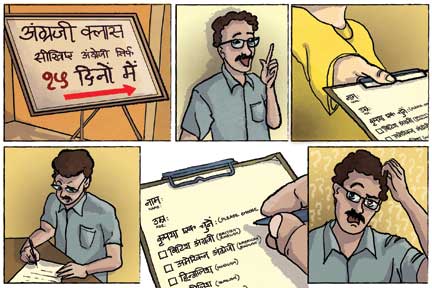 For generations, ‘English’ has been synonymous with ‘education’. First generation learners feel immense pride in being able to converse in the language. It is also important for those herding their children into the portals of education for the first time that their children go to ‘an English medium school’.

An existing knowledge base and pride in learning the language should make it easier for the teacher and the learner to deal with the language. But this is not always the case. While those who were educated in days of the Raj, spoke a variety of English that was closer to the British Standard and was ‘pucca’, in that sense, succeeding generations have moved away from this Standard, to an Indian Standard and related forms of the language.

At the same time, we also perceive the emergence of a tendency to make a little English go a long way. Local pride has led to the rise of local variants of the English language.

The most recent of these is the rise of Tanglish, a mixture of Tamil and English, made popular by the recent hit, Kolaveri di’. The ‘kolaveri’ phenomenon lends substance to the argument that Standard English continues to remain important. Terms like ‘soup song,’ used in it, foxed even a Tamilian like me! Apparently ‘a soup song’, is a song about failure in love!

This then is the problem that has to be dealt with if Standard English is not used. Communication becomes difficult and at times, impossible; more so, when youngsters of the kolaveri kind are employed in droves by software companies and BPOs.

Given the importance of English as the main language of communication in a globalised world, there is a greater need to hold up the Standard form, if only to be able to communicate effectively with the rest of the world. The language has to be of an acceptable standard so that it can be understood by co-workers, customers and audiences overseas. In such a situation, word choice, use of the correct tense, punctuation and spelling become important.

There is consensus among those who know the language with regard to what is “correct” and “acceptable”. We, in India, can define Indian Standard English as the language used by educated Indians, just as British Standard English is defined as the form that is used by the educated classes there and, is therefore, accepted as the norm in England.

Obviously, there is common ground between the standard varieties spoken in various Anglophone countries, which aid understanding and communication between their users. Deviations from the Standard, like Singlish, spoken in Singapore, retain too much local colour and language, all of which come in the way of effective communication.

In the publishing world, the use of Standard English assumes greater significance. Local variants and idiosyncrasies in the use of language may be acceptable in fiction, but in non-fiction and in textbooks, whether for schools or for higher education, adherence to Standard English is a given, if the target audience is to receive the information without problems of comprehension.

The British Standard is adopted, by and large, in the books produced by established publishing houses. It has also been adopted and taught in most schools and institutions of higher education and in training programmes. This is perhaps due to our colonial heritage and the fact that this has been the Standard used in schools and educational institutions to teach several generations of learners, leading to a familiarity with its spelling and structure. 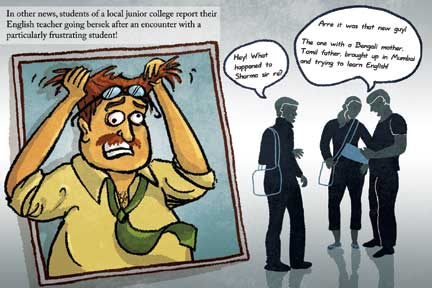 However, given the popularity of American English, there is a tendency to let it creep into usage, in speech and in writing. With most computers, social networks and similar sites set to accept the US Standard, there is a tendency to move towards American spelling. Authors are more likely to spell ‘color’ or ‘program,’ the American way, rather than spell it ‘colour,’ or ‘programme’, as in British English. Depending on their place of education, they may or may not use a serial comma, which is more common to the punctuation used by the Americans.

Often, writers and users may not even be aware that they are using words and phrases from two Standard forms of the language! For example, in a sentence like: “The lift was not working, so I had to walk up to our apartment,” we find the use of a word like ‘lift,’ which is a part of British English, rather than ‘elevator’ which is the American term, while ‘apartment’, rather than ‘flat’ is widely used in the US.

In India, it is common to find writers offering up a literal translation of words, phrases and expressions from their native tongues into English. For example, look at the following sentence: “The company was concerned about the money interest lost if one unit sits in the stock for one year”. A term like ‘money interest’ to denote interest is an attempt to clarify that the interest relates to money, not to other forms of interest! The phrase ‘sits in the stock’, on the other hand, seems to have its origin in the writer’s native tongue. It is also common for Indian authors to use ‘one hour’ rather than ‘an hour’ or ‘one year’ to ‘a year’.

The other problem that Indian writers and learners grapple with is the use of the correct tense in sentences. It is very common indeed to find a sentence like: “The spares are having high reliability”.

The editor has to iron out such deviations from the accepted norm; to make the language conform to the Standard that she has set out to follow in the style sheet for that book.

Publishers have also been trying to encourage the move towards simplification – in spelling and in usage. In several medical textbooks, even when the standard adopted is British, we find that ligatures are avoided, so words that were spelt anaemia,’ diarrhoea’ or ‘haemoglobin’ in an earlier generation of medical textbooks, are now spelt ‘anemia’ ‘diarrhea’ or ‘hemoglobin’, unless the author insists that the ligatures be retained!

Be it in the publishing arena, in employee training or in teaching, it is the target audience that should decide whether the standard that is to be used is the British, American or the Indian. Therefore, if a trainer has to teach Spoken English to a group of employees who have to communicate with their US counterparts, it would be sensible to teach American Standard English and to create training material using this variety. It is for this reason that several of the new publishing companies that copy edit and typeset books for American publishing companies train their editors to adopt American spelling, punctuation, grammar and usage. Schools that cater largely to the American expatriate community would naturally use American Standard English!

Awareness and knowledge of the Standard can be inculcated only through education, observation and experience; until recognition of correctness becomes part of the user’s being. Of course, the work of teachers and publishers would become so much easier if an International Standard would evolve or be created for the English language. But evolution, especially of the standard form of a language, is a slow process!

The author is Senior Editor at the Universities Press India Pvt. Limited, Chennai. She can be reached at dharaniktp@gmail.com.