The life of a ‘normal’ teacher, though many paeans have been sung to her or him as to how critical s/he is to the school system, continues without too many changes for the past hundred years or more. Let us look at who this teacher is in the present times, where s/he works and what her/his working environment is like. Starting with numbers and quantities would give a context to the emerging image in the mind’s eye.chong qi cheng bao

There are approximately five million (50 lakhs) teachers in India, and they are located as given in the table below. 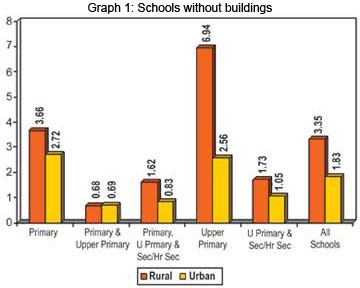 If you take a look at Graph 1, you will realise that despite all the progress that the country is making today, 5% (about 60,000) of the schools all over India are without a building, which also means that there are many teachers who go to a school which has no room at all, leave alone the other necessary infrastructure.

Of the schools with buildings, not all are pucca and teachers have to work in all kinds of shelters (see Table 3). The percentage of schools without pucca buildings, adds up to about 30% in rural areas and 20% in urban areas.

Of the schools that profess to have pucca buildings, whether government or private, except for a small percentage across the country, the rest in all likelihood do not have sufficient space for all the children, their books and bags, smooth floors, good ventilation, proper blackboards, possibilities for storage and display of materials that one expects in a normal primary classroom.

The larger schools usually fare better. China which is more populated has chosen to set up bigger schools with better infrastructure in central villages making it possible for a majority of children to access these schools instead of focusing on building one school every kilometer as is India’s policy. As the concentration is on fewer but better schools, the teachers also have a school atmosphere, where they can interact with their peers and work better. 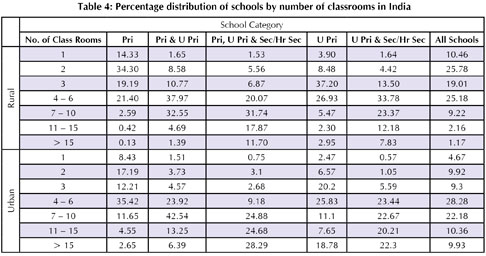 The figures in Table 4 indicate that in rural areas there are 36.2% schools with only one or two rooms, whereas, in urban areas about 50% have 4 to 10 classrooms per school. 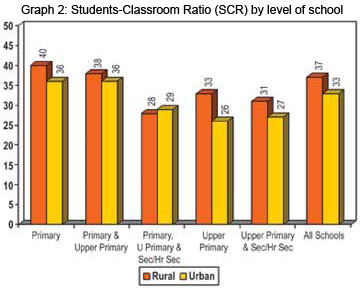 Of late, under its Sarva Shiksha Abhiyan (Education for All) programme, the government has released lots of funds to build more classrooms in schools. This has resulted in a sizeable reduction in the number of students per classroom and per teacher. For both the teachers and the students this is a welcome situation as they don’t have to deal with over-crowded classrooms. Another reason for the comfortable numbers per classroom in government schools could be that many parents are enrolling their children in private schools. 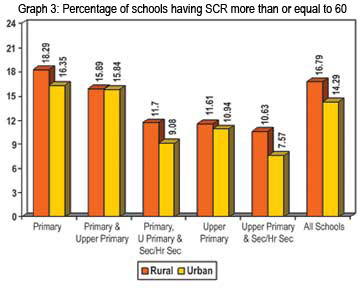 Despite government intervention and positive trends, there still needs a lot to be done. There are at least 31% schools that have more than 60 students per classroom, per teacher (see Graph 3). This means that the teacher will be overworked and stressed out.

In schools, at any given moment you would expect at least a 100 people. These are people who have to spend at least a minimum of six hours in a day in the school. Therefore you’d expect that every school that is built will have basic amenities like drinking water. However, our data here suggests that the percentage of schools both in urban and rural areas that do not have any drinking water facility is still very high (see Table 5). And of the schools that do provide drinking water one is not sure of the source. 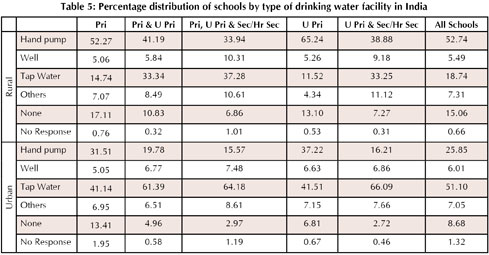 Bathrooms are another basic facility that all schools should have. Here too from the data below you can see that at least half of the rural primary schools do not have bathrooms at all, forget separate bathrooms for boys and girls. While about 52.82% primary rural schools have common toilets which is the smallest number, most urban private schools (76.86%) have bathrooms. A similar pattern is seen in the building of toilet facilities for girls. (Refer to Graph 5).

Even so, this indicates that women teachers in about 15% urban schools do not have access to a bathroom in the school, which is not a comfortable position for the country.

Usually one assumes that the majority of the teachers are women and that could be true if one looks at only the urban schools. However, if one goes beyond one’s usual “what we see, we know” stance, it is a fact, as can be seen from Table 6 that there are a large number of men teachers especially as it becomes a more financially reliable profession for young men in the villages to get into the government sector.

All these figures given in the above tables and graphs should give you an idea of the school system in India. Within this large, rather monstrous system that appears to be a monolith, lie the lives of teachers struggling and trying to fulfi ll the daily tasks of their profession.

Let us start at the beginning when a teacher is selected to be a teacher-trainee.

With the National Council for Teacher Training (NCTE) taking some of its tasks more seriously than the others, a plethora of training institutes have been opened in the last couple of years. In these new teacher training schools and in the training institutes that were initiated after the New Education Policy of 1986 known as the DIETs (District Institute for Education and Training), the student-trainees are taught using conventional modes of lectures, examinations, and theories that do not lead to knowledge and only encourage mechanical learning. About a 100 from every batch of the DIET’s preservice programme and about 50 from the private institutions graduate every year after undergoing the two-year programme that qualifies them to work in elementary schools.

The more well-known B.Ed course is designed for teaching at the secondary level.

There are no avenues for reflection, examination of one’s experiences, discussions leading the student-teacher to develop into a thoughtful professional with an ability to create meaningful learning experiences for the students in his or her future classroom. No seminars are held nor are reading sessions of current books on education encouraged or even suggested.

Teaching is one job, where the personhood of the person is in play almost all the time and if this is not addressed in the institutions that prepare the teacher professionally, where else can this be done? When else will the teacher find the time and an appropriate course that will enable her to build the required perceptions, skills and knowledge? Child development and how children learn is not taught and principles of androgogy (how adults learn) is not even a part of the teachers’ training, by and large.

After spending two years training to become teachers, the student-trainee graduates, are ill-prepared for the daunting task of teaching, after having done a few model classes in nearby schools. Under these conditions they fall back on their own experience as students. As a result, there is not much hope of them bringing about a change in the classroom, whereas a dynamically trained teacher could have brought fresh energy into the system.

A few years ago teachers were recruited almost immediately on graduation as there was a demand and a long list of vacancies in the states. But with the mushrooming of private teacher training institutes, fresh graduates register with the employment exchange, and they can be called as per vacancies in the State. There have been instances when teachers have been taken in just before the age of retirement!

Even so, in spite of all that has been said, many teachers are enthusiastic when they join and want to try out some thing or the other to reach out to the children. However, faced with just a blackboard, a tattered textbook in the child’s hands and perhaps a notebook or two; and with no support either from the peer group or from the supervisory staff, the fresh teacher gives up soon enough. The usual school, government or private, is not designed for the teacher to be and feel successful about her work, her profession and herself as a person.

Many of the teachers’ jobs are a dead-end street, without much possibility of growth or development. Once they get the coveted job, very few move on to being heads of schools or trainers or get into administrative jobs. So, from the time a teacher is recruited, till she retires, she is teaching almost the same age group of children and a similar textbook that is cosmetically redone once every few years.

As a compensation for this lack of opportunities for upward mobility, some state governments have built in benefits for different stages of a teacher’s life, but this cannot be said of all states.

What is also facing the teacher world is the large scale recruitment of para or contract teachers under different nomenclatures in almost all the states. Many of them are under-qualified, with some of the states taking on even 12th pass students as teachers to reduce the burden on the state’s education budget. This further undermines the role and responsibility of the regular professional teacher.

Sarva Shiksha Abhiyan, which is a central government promoted programme for enhancing the quality of elementary school has as its agenda the achievement of universalisation of elementary education by 2010, in line with India being a signatory to international declarations and to the UN Millennium Developmental Goals; what are the goals that India has committed to, through the Jomtien Declaration in 1990 and the Dakar Conference declaration ten years later in 2000?

What are the national goals that are being promoted, through the NEP of 1986 (along with the modifications made in 1992) and the recent National Curriculum Framework 2005?

All these collective commitments need to be taken cognizance of and teachers have to be prepared or prepare themselves with this overview. Otherwise the aspirations of the people that have been built into the Constitution, the international agreements, the national goals for development, objectives of the education system, practices in the school room, all elements of the education system may continue as disparate hollow units, instead of working cohesively towards a grounded teacher preparation, professional recruitment and systematic in-service support; all of which has to be perceived within these broad frameworks to ensure that teachers work “with their feet on the ground, eyes on the horizon, and their heart in the sky”.

The author is Director, SchoolScape, Centre for Educators, Chennai. She can be reached at amukta.m@gmail.com.

I want to become a teacher