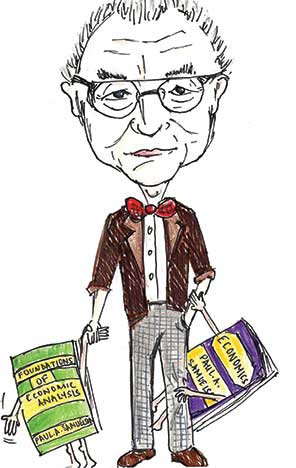 Since economics deals with the distribution of material resources, it is very susceptible to ideological corruption. Often, in the introductory chapter itself, economics textbooks distinguish between positive and normative economics. Readers are told that positive economics is about ‘what is’ and normative economics is about ‘what should be’. However, in a social science such as economics, normative considerations invariably influence the positive theory. Indeed, as is well known among the historians of economic thought, the rise of marginalist economics – the current mainstream in economics research and teaching – in the 1870s was a response to the political economy of David Ricardo and Karl Marx wherein the unemployment of resources, particularly of labour, was an equilibrium tendency as opposed to the full employment tendency found in marginalist economics. However, such important histories are usually not found in most economics textbooks.

The pioneers of marginalist economics, William Jevons, Leon Walras, and Carl Menger, developed an economic theory, wherein under competitive conditions, the economy tends towards the full employment of all resources, including labour. Since then, with notable contributions by Alfred Marshall, Arthur Pigou and Paul Samuelson (rightfully the father of economics textbooks), textbooks keep repeating the same story: competition, acting through the twin forces of demand and supply, will ensure that all resources are fully utilized. In addition, they also propagate the myth that workers and capitalists in a competitive economy earn as much as they contribute to the process of production.

Knowledge in economics
Historical events such as the Great Depression of the 1930s posed challenges to the dominant economic wisdom. In recent times, the 2007-08 Global Financial Crisis led economics students and teachers to question the mainstream economics paradigm – particularly, its scholarly journals and textbooks – and brought about a renewed interest in the economics of Keynes and other heterodox thinkers.

Sometimes books also pose challenges. One such revolutionary book is Piero Sraffa’s Production of Commodities by Means of Commodities, a slim volume of around 100 pages published in 1960. This book pointed out the logical inconsistencies with marginalist economics and simultaneously revived the economics of Smith, Ricardo, Marx, and other classical economists. Since Sraffa’s revolution, several promising themes have emerged from the research in classical economics pertaining to the theory of value, distribution, and economic growth; the marriage between classical economics and Keynes’s macroeconomics has been a particularly fruitful line of inquiry. Although contending economic theories is a fact, most economics textbooks are written as if economics knowledge progressed in a linear and cumulative way, with the ‘new’ theories making the ‘old’ ones obsolete. 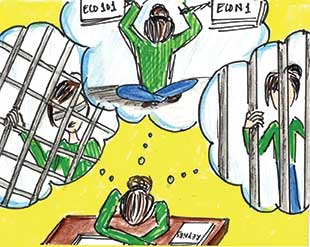 According to the Oxford English Dictionary, a textbook is ‘a manual of instruction in any science or branch of study, esp. a work recognized as an authority.’ Since both students and teachers recognize textbooks as an authority, it is all the more important for them to remain true to all the different economic paradigms besides marginalist economics. After all, textbooks ‘are expert devices at indoctrination’ (Thomas 2012). Thus, it is extremely important for introductory economics textbooks to present the different economic paradigms such as Classical Economics, Marxian Economics, and Post-Keynesian Economics which provide alternative ways of making sense of the economy.

Economic theory and policy
Economics was and is a policy science. In the Wealth of Nations, Smith defines political economy (as economics was then called) as follows: ‘Political economy, considered as a branch of the science of a statesman or legislator, proposes two distinct objects: first, to provide a plentiful revenue or subsistence for the people, or more properly to enable them to provide such a revenue or subsistence for themselves; and secondly, to supply the state or commonwealth with a revenue sufficient for the public services. It proposes to enrich both the people and the sovereign.’ That is, economic theory should be able to tell us why there is unemployment and poverty around us and also be able to suggest measures to reduce and finally eliminate them. In addition, economic policies (particularly those related to taxation) are essential in the provision of public services such as education, health, and defence.

Since economic policy emanates from economic theory, and the distribution of material resources – agricultural land, mineral resources, tax revenues – is based on economic policies, it is very important to be critical of all economic theories. This involves questions such as what assumptions are made; whether the theory is applicable in India; and what are the limitations of the theory. As a matter of fact, being critical helps us understand the scope of a subject. For all the above reasons, one ought to be wary of economics textbooks that teach ‘“principles” or “foundations” which appear contrary to our surrounding realities (Thomas 2012). Lastly, the translation of an economic theory into economic policies is not an easy process and is one that requires a thorough knowledge of political processes and existing socio-cultural norms and practices.

Ethics and economics
In the first paragraph, we touched upon the difference between normative and positive economics. Normative considerations underlie most economic policies. These considerations may be economic and/or socio-political in nature. For example, that the fiscal deficit should be 3.5 percent of India’s Gross Domestic Product (GDP) is a normative statement. Take another example: the government should devote at least 3 percent of the GDP for investment in public health. In the first example, the normative consideration is primarily economic because mainstream economics suggests that fiscal deficit is bad. However, in the second example, the normative considerations are economic (because a healthy workforce contributes positively to an economy’s GDP) as well as socio-political (because all sections of society should be able to access and avail health services). 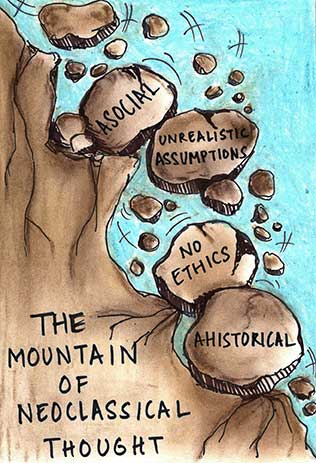 Economics is finding it very difficult to say ‘I don’t know’. However, this is rather unscientific of the economics discipline. Wage determination is a case in point. Mainstream economics postulates that the wage rate is determined by the marginal product of labour. What about cultural and historical factors? What about wage bargaining by workers? In a sense, mainstream marginalist economics is asocial and ahistorical. In fact, what economics requires is a narrowing of scope and an openness to history and politics. A narrowing of scope would imply sticking to strictly economic issues – employment, income distribution, inflation, etc. Therefore, it would augur very well for economics to be in the good company of anthropology, history, politics, and sociology instead of trying to impose marginalist economic principles to understand all social phenomena.

Conclusion
A qualification of the title of this article may now be provided. The learning of good economics warrants the unlearning of marginalist economics. The unlearning occurs as the limitations of mainstream marginalist economics become known: logical inconsistencies, problematic assumptions and ahistoricity. Besides this learning, there is often a learning of alternative modes of understanding economics simultaneously and/or subsequently. It is indeed, as Keynes writes in the Preface to The General Theory, ‘a struggle of escape from habitual modes of thought and expression’.

Note: I thank my student, Sahana Subramanyam, for her wonderful illustrations which accompany this article.

The author is with the School of Liberal Studies, Azim Premji University. He received his economics education from the Universities of Madras, Hyderabad, and Sydney. He blogs on various aspects of economics at www.alexmthomas.com. He can be reached at alex.thomas@apu.edu.in.