I have always been fascinated by uniforms, although many may associate them just with discipline. Even today, I admire young men and women smartly turned out in uniform, be it one of trade or profession. 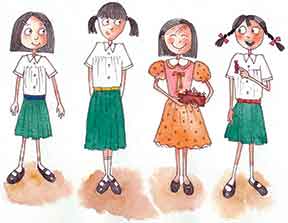 My school uniform was a regular convent staple for girls – a green skirt and a white blouse with a collar. For extra modesty, the blouse had small gathers at the chest too! The green itself was of different hues, since the school did not supply it. Girls from conservative families wore the skirt well below the knee, while some bold teenagers were not concerned with a rising hemline as they grew taller!

We were also supposed to compulsorily wear a slip underneath – a “shimmy” it was called. If you like to know the sort of a garment that was, just look at the current designs of fashionable western clothes. Do you see a close-fitting, sleeveless, vest-like thing? That’s the one!

The only days a girl was allowed to wear ‘colour-dress’ was on her birthday. She was the queen of the day, strutting about with a box of Parry’s sweets to distribute among friends and teachers. Some whose birthdays fell during holidays would come to school in their new dresses and the sweets on the last working day!

Somewhere along the way, the Sisters at the convent discovered the divided skirt. This was a skirt with box pleats, and it doubled up as a pair of shorts as well – if extending it till the knee could still qualify it as ‘shorts’! This was a once-in-a-week uniform, and quite a few of us hated it! If not stitched well, it could attract some laughs on the road, as we waddled like ducks when we wore it. We wore this grudgingly for Sports Day and other such days.

In Tamil Nadu, it was Chief Minister Kamaraj who gave free uniforms to children in government schools. He was himself a school dropout, and he understood that it was necessary, because poverty would restrict the parents from buying clothes, and therefore children may not come to school. Today we hear about cycles and laptops being given, but the times are different now, and this is a political game, not one of true concern.

The government schools in the south too have adopted the salwar kameez instead of a full-length skirt or pavadai for girls, as considerations of convenience have far outweighed the north – south divide. Not only convenience, but safety also is a must in uniform. Ties or bows were forbidden in the lower classes, and dresses for young children could have buttons that are easy to fasten. Regarding the shoes – these days there are many brands that cost an arm and a leg, but they are from designer labels. In my son’s school, I remember some boys being sent home by their PT Master, because they wore designer white shoes, not the canvas ones prescribed by the school. No doubt the former was much more comfortable, but I salute the teacher who took on the teenagers and taught them a uniform lesson! 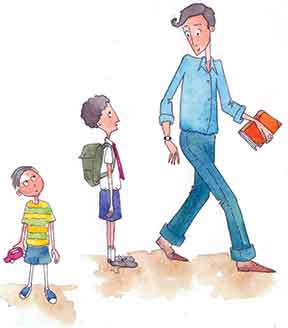 I have also found that schools that do not follow a system of uniforms, especially in the primary classes, are usually meant for the elite. The attitude is one of ‘if they can afford to show off their clothes, then why bother them with staid uniformity’? Even in such schools, I have seen that the children wait to grow up and wear a uniform in the higher classes!

Most of the youngsters in their final year of school are dying to enter college and wear clothes of their choice. That is when the parents realize the usefulness and economy of the uniform.

In some schools, I find teachers wearing identical saris. I was told that it was to reduce staff room conversation centred on clothes. While that is open for discussion, I felt that a teacher who is given five different kinds of saris by the school may just save time every morning, not wondering about that perennial question some of us face when we open our cupboards – what do I wear today? Coming to think of it, I wouldn’t mind wearing a uniform again, perhaps twice or thrice a week!

The author is Executive Editor, Ratna Sagar P Ltd. She can be reached at nagalakshmi.bala@gmail.com.