Ever since the introduction of money as a medium of exchange and store of value in human society, the problem of increasing prices has plagued economies through the ages. The average general increase in price level is termed as inflation, and the rate of inflation is the growth rate of the price level. It implies a decrease in the purchasing power of money. Inflation is typically measured using a price index – a consumer price index or a cost of living index that traces changes in the prices of a basket of essential consumer goods over a period of time. As modern economies become ever so complex and engage in the pursuit of attainting higher growth of output and employment, inflation has emerged as a persistent phenomenon. Understanding its causes and effects upon economic growth and wellbeing becomes imperative. Economists widely differ in their views on the causes, effects, and policy measures to control inflation. This article attempts to bring these issues to the fore, and how a complex economic issue like inflation needs to be taught and understood. 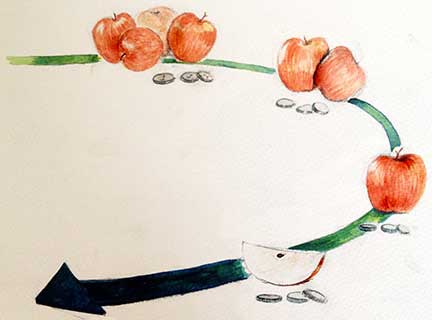 Causes of inflation
Explanation for the factors causing a general price rise can be classified into two broad categories – demand-pull inflation and cost-push inflation. The first refers to all those factors that cause an increase in demand for goods and services. The increase in demand could be due to a sudden increase in nominal income, wages, and salaries, causing prices to rise in the short term. Another reason could be that the economy is already operating at full capacity with all resources gainfully employed. And hence, any increase in demand cannot be matched by an increase in supply, causing prices to rise. This notion of inflation due to excess demand comes from the famous quantity theory of money. In its simplest form, it expresses an equation of exchange, an identity as MV=PY, where M is the quantity of money, V measures the rate at which money is circulated in the economy during a given period. P is the average price level and Y the total output of the economy during a given period. This identity or its many other varied forms, equating the amount of money with the value of total output during a period, is used as a behavioural description about increase in the price level. Given that V and Y are constant during a given period, the theory postulates that there is a direct relationship between the quantity of money M and the general price level P. The quantity of money supply M, which is assumed to be exogenously determined by the government through the central bank, causes prices to rise. If the quantity of money is doubled then the prices are doubled and therefore the growth of money supply determines the inflation rate.

Cost-push inflation, on the other hand, results when pressure is put on cost elements leading to a price rise. Given a certain level of aggregate demand or output, increase in prices may usually come from labour unions demanding or bargaining for higher wages or companies trying to increase profit shares. Some economists in the Keynesian tradition reject the quantity theory of money in its varied forms in explaining inflation. More realistically, they view the economy as operating below full employment with excess capacity, yet inflation occurs because of conflict over income shares, given the level of aggregate demand in the economy. Conflict theories of inflation explain how various social groups – the workers, capitalists and others compete over the given income shares. The bargaining power of each group is determined by the market power they can exert. The idea of bargaining power is as old as Adam Smith and Marx. If the workers are well-organized and unionized against the capitalists who maybe in need of more manpower, the workers may win big wage increase, thus leading to increasing costs and the capitalist passing it to higher prices, causing inflation. Similarly, capitalists in order to maintain or increase their profit share, increase prices, causing inflation. Any increase in cost without an equal increase in productivity will cause an increase in the prices. Another important factor that pushes up costs are ‘supply shocks’. These are sudden increase in the cost essential raw materials attributed to instable political, social, and environmental factors. The ‘oil shocks’, high increase of crude oil prices in the 1970s and 2000s due to unrest in the Middle East, is a classic example.

Effects of inflation
Whatever be the cause of inflation, some sections of the society will be at the receiving end, if high inflation is allowed unchecked for long periods of time. Normally, people do anticipate some price increase and try to adapt and make allowances for expected inflation in their transactions and contracts that terminate at a future date. Economists also believe that a moderate inflation works to stimulate private investment, if the economy is operating at full employment level. Inflation is also beneficial to debtors who borrow at fixed interest rate, as they repay with money which has become less valuable than before.

However, inflation is seldom as anticipated. During inflation, all prices do not rise proportionally together; besides upsetting personal financial planning, it affects income distribution. Pensioners, fixed income earners, casual wage labourers become worse off as their income cannot keep pace with the rising price level. High inflation also leads to distortion and variation of relative prices. Relative price is the price of a commodity measured in terms of another commodity. Inflation causes high variability in relative prices, creating uncertainty for firms to make investment decisions. Increasing prices also distort taxation, because of inflation people may start paying more taxes in nominal terms even though their real income, i.e., their purchasing power remains unchanged. Hence, inflation tends to redistribute income in favour of the economically powerful groups at the expense of others. 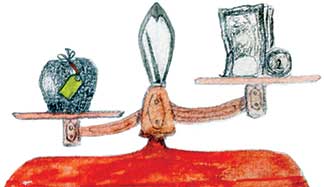 Controlling inflation
It is clear that high unexpected inflation does not augur well for the economy. The dominant view of what causes high inflation is the high growth of money supply as discussed above. In that model, money supply is exogenously determined by the government, and therefore, the central bank is called upon to control money growth through its monetary policy. Monetary policy may take the form of adjusting the various short term interest rates and resorting to open market operations, i.e., buying and selling of government bonds in the open market with a view to control banks’ reserves and hence their ability to dole out loans. However, monetary policy as the only tool to control price rise has given mixed results, and has sometimes been ineffective. This is so because banks’ supply of money largely depends on demand for loans and may not depend fully on the interest rate. Moreover, attributing inflation simply to high growth of money supply stands on flimsy theoretical foundation as discussed above. This idea of inflation, neglects other causes of inflation like cost-push inflation, and therefore other means of controlling inflation.

Economists, who view inflation as resulting from increasing cost and supply shocks, advocate some form of income or tax based policy. Buffer stock, in which the government buys and sells commodities to control inflation is advocated. Not only commodities, buffer stock in the form of labour employment through government schemes can also be used to control instability in general price level.

However, the concept of NAIRU is still a debatable issue among economists and there is no concrete empirical evidence to suggest the stable nature of NAIRU. Others have also questioned its theoretical underpinnings. Economists in the tradition of Keynes argue that actual economies do not operate at full employment and full capacity rather below it, and more so for developing economies. Therefore, deficit financing increases investment and income with mild inflation within acceptable limits. High inflation is caused by high costs and wages which can be controlled through some income policy discussed above. True inflation occurs only when the economy reaches the ideal state of full employment.

Understanding inflation
While inflation as discussed is an economic phenomenon, it can have big social and political consequences. The issue of price rise is dear to everyone, as is evident from every election and high decibel discussions about it in the media almost every day. Therefore, it is imperative that inflation needs to be understood from every perspective. Our textbooks and learning materials are dominated by a narrow one way understanding about the causes, effects, and control of inflation. This is when economics as a discipline has pretensions of being an exact science. Economics as a good social science must have the openness to accept plurality of ideas. It’s high time that students are also presented and taught plurality in economics and given alternative explanations about inflation. Here are a few introductory references for an alternative understanding of inflation besides the usual dominant textbook view.

The author teaches at the School of Economics, University of Hyderabad. He can be reached at akumwalling@gmail.com.