I remember having to fill in a series of forms when I was applying to colleges, where I had to mention my ‘stream’. There were only three choices – commerce, science, arts. It might seem odd, given the Indian context, that I was stuck with a simple question like this. But I have had quite a different background from most other students. My school follows the Cambridge A-level system, where one’s combination of subjects for high school is left to the students. So I had an extremely unusual combination: geography, biology, math, and sociology. To some people this seemed an arbitrary and random mix, but in fact it was a carefully thought-out decision. It hinged on the fact that I was taking geography, and that my interest was specifically aspects of environmental sustainability. I have known for a long time that I want my career to be oriented around social and environmental work. 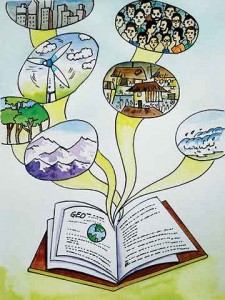 My area of interest has been hard for me to explain or pinpoint, I always gave this jumbled explanation of it being the intersection between the environmental and the social. Environmental issues are always intertwined with human issues, whether they are about resources, climate change, or even natural hazards. When it came time for me to choose my subjects, therefore, I decided to go with geography. It really expertly covered all the areas of study that I was interested in. And the more I think of it, the more I realize that geography cannot be pushed into the conventional arts-science distinction, as it is the one subject that bridges the gap between them and brings them together.

From its focus on an understanding of spaces people occupy, through changing population structures, to exploring migration patterns, and looking at resource management and sustainability in different environments, geography offers angles to social-environmental issues that very few other disciplines can even come near to achieving. Physical geography, too, is extremely flexible. It touches upon the chemical composition of substances, the physical forces acting upon our world; both large and small, and the biological processes that occur continually to mould and change the Earth. Geography, therefore, gave me a broad grounding for my understanding of a lot of other subjects that I had thought I would leave behind after the 10th. It even piqued my interest in some of them! More importantly, however, it allowed me to explore these social and natural phenomena through the lens of down-to-earth processes and occurrences that I could relate to in my everyday life.

There is a wide range of subjects that can come under the realm of geography. Each one of them in turn brings together aspects of other disciplines. My geography course, therefore, offered me a myriad possibilities for exploring my interests. It branches into so many subcategories, each one with its specificities, but each one equally dividable into more topics. And each topic that geography attempts to comprehend requires an interdisciplinary understanding. For instance, in the study of international migration patterns, one has to understand political, sociological, and economic, and in some cases, psychological reasons for movements, both long and short distance, both long and short term.

Human geography, in particular, covers some crucial areas of interest for me. I will focus on how aspects of urban geography and environmental management – a field of research that involves the study of resource management and environmental degradation – given their vast interdisciplinary approach, have helped me in my understanding and have increased my curiosity.

One of my areas of interest is studying urban environmental issues. When it comes to waste disposal or space management, this can be a huge issue, especially in the large metropolises of developing countries. Another area of concern for me is social issues in urban areas, including issues that slum dwellers face, or problems of rural migration and overcrowding. Both of these topics can be viewed from sociological or economic angles. But when viewed through the lens of urban geography, where one understands the processes by which the overcrowding occurs, and the precursors of certain aspects of areas of the cities (e.g. extent of residential and commercial areas, or the nature of disparity in some places), the entire understanding of these ‘social’ phenomena changes. For me, personally, when studying urban geography, I was able to better absorb the spatial and other linkages within urban areas through an understanding of the political and social tensions in particular cities, and the history of the development of those urban areas. I understood why people who seem to constantly be making ‘progress’, or even constantly making efforts to improve their livelihood are missing out on certain geographical matters. For instance, geographic models have tried to explain the phenomenon of inner cities; why they are so crowded, and why there is so much disparity among the people living in them.

Often, this kind of understanding becomes relevant in certain situations. When working on reducing urban waste, one has to understand patterns of garbage usage in the city, and map out which parts of the cities consume more and waste more and so on. This u‑nderstanding has to be derived through a study of the geographical spreads in those areas of the rich and poor houses, and an understanding of the economic statuses of the different sections. One also has to attempt to understand the mindsets and social influences on all of these people, pushing them to consume or dispose in certain ways. Once this comprehensive understanding is formed, then one can use it to attempt to solve some of the issues caused by urban waste. This kind of in-depth geographic research gives the data some authenticity and allows people working on waste management to use these inputs and create a practical solution. 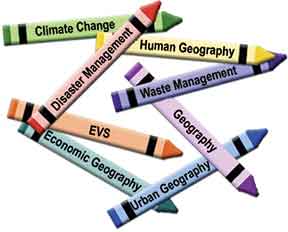 Geography allows for an understanding of the processes of the creation of oil, gas and so on, of the complicated processes by which alternative fuels are made, as well as an understanding of the rates of consumption of these resources and the distribution of resources in the world. In the example below I would like to illustrate how environmental management also forces an appreciation of the geography of the area in which people attempt to use and make resources or electricity.

Munsiari, a part of Kumaon in Uttarakhand, has the Goriganga river flowing through it. The region is becoming more and more dependent on electricity. More importantly, though, Delhi, the nearest metropolis, has a dramatically increasing demand for electricity. This is leading to the damming of several Himalayan rivers for hydropower, including the Goriganga. The idea is to build small scale dams along the river. It is an extremely geologically unstable area, where earthquakes and landslides can occur any moment. When building dams, this has to be taken into consideration for two main reasons. One, the dams can be rendered useless if there is a landslide in that area, as they can get blocked and can be damaged. Two, the dams add to the instability in slopes, increasing the possibility for landslides. Another important yet seemingly ignored factor is that rivers carry the greatest amount of sediment at their sources, and so sedimentation of dams is also an issue in this area. In addition, there are severe repercussions to all the communities living alongside the rivers.

Very often disaster management is not taught as human geography, but as physical geography. It is important to note, however, how strongly bound the two are with each other. This is especially so when studying environmental management, where the physical world acts as a constant barrier to the human world, and vice versa. Studying environmental management has truly helped me realize this.

The few human geography courses in India that I found in my search for a meaningful degree programme seemed too focussed on cartography, demographic and developmental aspects of geography. I feel these courses have not taken into account the interdisciplinary nature of the subject which is increasingly important in today’s world, and therefore they have not tapped the vast potential of the subject. If more attention were paid to this both at the high school and college level, more students would find geography an attractive field to enter. It is an important field of study, especially in today’s increasingly globalized world, with our current issues of resource management, climate change, poverty and overpopulation. Geography provides a wider understanding of most of the issues that we face today, and while other subjects can offer proximate explanations for these phenomena, geography, in studying the bigger picture and ‘grounding’ it, so to speak, acts as an overarching means of explanation.

The easiest way to demonstrate the interdisciplinary character of geography is to use case studies. This can be done in a very general way, for instance by studying rivers, or mountains. At first try to understand their physical features and the processes by which they interact with other living and non-living entities. Then understand the various ways in which humans interact with them, and the give-and-take relationship that exists among them. Through this understanding of human interaction with these large physical features, we can attempt to understand the role that each of these features plays in our daily lives, and in the larger society. For instance, we can study how and why urban settlements are born near rivers, and how humans develop a dependency on them.

For a more in-depth understanding, one can take specific case histories of ancient and recent urban growth and study the various aspects of those societies. Perhaps one could even study the changing nature of dependence on water bodies. Examples of vanishing rivers such as the Colorado River or of important rivers like the Yang Tse are often useful to illustrate this point.

One can bring in the field aspect here too, where students can go to a river and study the various physical and human processes it supports. They can do this by observing and learning about physical processes, and by speaking to people and assessing geographical factors in order to look into the human aspects. Variations in this exercise can also be done with man-made features such as water tanks or dams, and understanding their relationships with the physical and human worlds around them. By looking in-depth into such case studies, the students will get an understanding of the complex relationship between the human and the physical, as well as the need for an understanding of many different subjects in order to truly appreciate a seemingly simple physical feature such as a river or a tank.

The author is doing her bachelor degree in Ambedkar University, Delhi. She did her schooling in Centre For Learning, Bangalore, where she developed her interest in geography. She can be reached at [email protected].