As a kid going to school in the 1960s and early 70s, the start of the new academic year was something that I always looked forward to. Oh, don’t get me wrong. I was not one of those eager beavers who wished to broaden his horizons by drinking from the fountain of knowledge – which every educational institution I went to, claimed to be. If my knowledge base did increase during an academic year, I considered it a fringe benefit. The primary purpose of my going to school was to hang out with friends – play ‘gilli danda’, cricket and marbles (which I was really good at, I might add, and had my parents allowed me to pursue this game, I might have been dubbed ‘the God of marbles’ – a la Tendulkar and Roger Federer!). 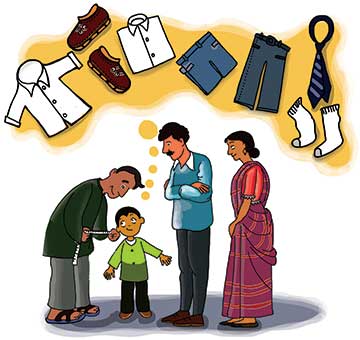 The best part of going to school was the 20 minute walk to and from the institution along with my friends, talking about everything under the sun, except studies – discussing the battle between good and evil (as I saw it then) taking place at Reykjavik in Iceland – when the quixotic American, Bobby Fischer, scored a sensational win over the reigning world chess champion Boris Spassky. The fact that my friends and I had not seen a boxing bout nor knew anything about the sport, didn’t stop us from making bold predictions about how the ‘handsome’ Mohammad Ali would knock out the ‘ugly’ Joe Frazier by round 5. Needless to say, we were all shell-shocked when the All India Radio newsreader announced that the ‘beast’ had won a unanimous decision against the ‘beauty’. On the national scene, there was always cricket – the exploits of Wadekar’s men in the West Indies and England were discussed threadbare.

But the beginning of every academic year was indeed something truly special. The excitement would begin a week or two before school reopened. It started the moment your father or mother took you to the ‘Binny’ showroom to buy material for your uniform. Enough material was usually purchased for three pairs of shorts/pants and four shirts. It was the same number every year; nothing more, nothing else. The salesperson at the shop would look at my stocky frame, do some mental calculation, and then using a longish iron scale would proceed to measure the length of material required. Picking up a shiny pair of scissors from the counter, he would proceed to cut the cloth that I would be wearing six days a week for the next ten months or so. Not once in my 11 years of schooling did it ever occur to me to ask my parents whether we could buy readymade clothes or whether I could have four pairs of pants instead of three. Like the soldiers in Tennyson’s ‘Charge of the Light Brigade’, kids those days did not question ‘why’.

Once the material had been bought, the next pit stop was the Bata or the Carona shoe store; here we would usually buy a pair of black leather shoes and a pair of what we then used to call ‘canvas’ shoes. Unlike the sports shoes of today, the canvas shoes of the 60s did not test the customer’s ability to choose from a mind-boggling range of selections. Manufacturers came out with only one variety – what I would like to call the ‘take it or leave it’ variety. The leather shoes, on the other hand, offered some choice, and while viewing those on display, I always gravitated towards what were called ‘pointed shoes’. These were very popular among the heroes in our films; so it is not surprising that most school going children found them alluring. But few parents found them fascinating; for one thing, they were a bit more expensive than the staid but sensible variety that they preferred their children to slip their feet into. Also, the snazzy pair was not designed for rough use; when we used to kick stones and the occasional bottle, these pairs usually fell into a state of disrepair in a matter of months. So during my 11 years of schooling, the same type of leather and canvas shoes adorned my feet!

When you tried the new pair at the shop, your parents would press down on the front portion of the shoe to make sure it wasn’t an exact fit – if it was, the next size was ordered for. Once the right size had been determined, the salesperson would pack each pair in a sad looking brown box – which even a baby of six months could have easily crushed with its hand – and then proceeded to tie a string around each box. This was to make sure that the valuable contents did not fall out while you were on your way home.

The following day, you were taken to the tailor, and while he was taking measurements, rapid instructions used to be given by the mother about how the material was to be stitched – for example, “let the sleeve be long because after the first wash the shirt will shrink”. While such instructions were being given, the tailor, using a tape that had seen happier days, noted down the measurements on a piece of paper. The pencil, with which he used to write down the precious details, was usually found tucked behind his right ear. A week later, when you brought home the stitched clothes bundled up in a newspaper, you were asked to try them all out and perform certain calisthenics – stretch, squat, bend – to ensure that the stitching was okay. A couple of days before school started, the clothes were washed and ironed, and on D-day, I set out enthusiastically to school sporting my new uniform and wearing my new shoes.

The euphoria of the new academic year lasted for a week; after that, it was downhill. The smell of new textbooks and notebooks faded, and over a period of time, so did the colour of the uniform. By the middle of the academic year, a sudden growth spurt often resulted in the trousers look like ankle length pants. This didn’t worry my friends or me too much; we used to walk to school thinking we were following in the footsteps of Abraham Lincoln – pictures of Abe as a young man always show him in ankle length pants. As the academic year slowly wound down, you took the once shiny shoes to the cobbler for a stich here or a nail there; you noticed that the once white shirts had many visible ink spots which no amount of soap and ‘blue’ could remove. These were all signs that we students were ready to move on to the next class. What the future held in store for us at the next level, we didn’t know. But one thing was certain; we would definitely be getting a new set of uniforms!

In case you are wondering what happened to December, I’ve given the month the same importance as the Romans did in their time – relegated it to the boondocks. For the Romans, December was the tenth and the last month of the year. In Latin, the word ‘dece’ means ‘ten’. It is from this that we get words like ‘decathlon’ (an athletic event which combines ten track and field events), ‘decade’ (ten years) and ‘decimal’.