Photographs offer us moments from the past – immediate, recent, and distant – and have now become an important source of information for historians. While most of us look at a picture for what it shows (and what it makes us remember), a historian does more. He or she looks around, behind and across a picture to reconstruct not only facts but also feelings about the period it frames. This article takes a look at what goes on behind a cameraperson’s lens, and inside his or her mind, as an image is transferred from an experience in the present into a window to the past.

Photographing Hyderabad – or indeed, any city with a bit of a history – offers many interesting experiences through the view-finder. In photographing a monument, we are not only capturing a historical site, but a sense of time along with it. Different frames offer different perspectives to any subject of the camera; the ability to generate a sense of nostalgia and evoke various emotions makes photography a useful tool to convey emotions and ideas. History can be viewed subjectively and objectively through the camera. The objectification or “subjectification” of something would determine the trajectory of ideas and concepts it would suggest for the viewer (in this case, the historian). Viewing history through the lens of a camera can be fascinating as it gives one a glimpse into the past through several frozen fragments. The dual nature of an image – an antiquity that is surrounded by the modern – is a unique tool of analysis while trying to conceptualize history through photographs. This is also what makes photographs dynamic as they have the potential of being able to surrender many different instances of existence – that is, the photograph can be located in the present as well as well in the past – of the subject to the viewer. This is definitely true in the case of photographs of historical spaces, which represent the past but have layers of modern life around them making historical landmarks such as the Charminar, for instance, seem secure in their historical value. When trying to capture the Qutb Shahi1 tombs for instance, the right frame would not only capture the remaining bits of the original coverings of the wall, but also the partially decayed portions of it and portions of the tombs completely devoid of this covering. This represents the changes that the tombs have undergone over time and in some sense the photograph lends the tombs timelessness by capturing various stages of decay that have occurred over a period of time, in one single shot.

Even as monolithic historical structures dominate certain photographs, for us they seem to be engulfed in the contemporary. One is struck by the ‘everyday’ that surrounds the many mosques, tombs, and palaces in the streets of the Old City of Hyderabad. Many other Indian cities offer similar experiences – Lodhi Gardens or Safdarjung’s Tomb in New Delhi, Bibi ka Maqbara in Aurangabad, the Victoria Monument in Kolkata. The “ordinariness” of the exquisite and the “exquisiteness” of the ordinary provide a variety of historical threads to pull. This trend has existed since the colonial period, and can be popularly seen in the photographs documenting this era.2 Change can also be traced through a series of photographs of a particular subject. For instance, if one compares photographs of the Charminar area taken over the past few decades, one can trace the changes that have evolved over time without having to refer to documents describing such changes.

The constant renewal of our memories of history is best brought about through photographs. The intrigue of the past perhaps shapes the way we want to capture a particular moment. Do photographs help us understand reality or are they simply moments that a whimsical photographer has indulged in? Learning history through textbooks, I remember, was a daunting task. The only interesting aspect of our history textbooks were the photographs of the people and places that accompanied the text, whether they were aesthetically shot or not. This is not to say of course that books on histories are not widely read and loved, but the visual medium can be as immersive and informative as the written word. Even as one would like to believe that a piece of writing should allow the imagination to conjure images in our minds, a photograph too can lead one to imagine what exists beyond the boundaries of the image. When we look at our own photographs, in some way they are “structured” to give us what we would like to ‘see’ and ‘not see’. Photographic images makes one’s experience of history a dynamic interaction between the past and the present, and personal photographs seems to take this to another level. For a photographer these images are a souvenir. 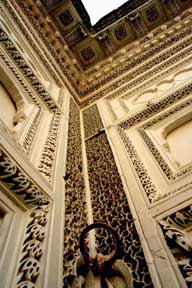 Photographs serve as a briefcase of memories that we carry with us and the camera an instrument of capturing memories. It would be a misconception to think only memories are captured; emotions, state of mind and the nature of the surroundings can be inferred from a photograph. Of course, this would depend closely on the manner in which the photograph is framed. Photographs can be seen as mystical due to the way in which they can represent both the past and the present in one frozen image; they make experiences of history more interactive and personalized, and of course heavily influenced by one’s own imagination. Historical spaces act like an empty canvas of imagination, where history is defined through an act of photography. Family portraits can also be considered important historical documents. The clothes people are wearing, hairstyles, jewelry, shoes and other adornments reflect the tastes and aspirations of a particular family or era and give one an insight into the lives of people during a particular period of time.

There is immense potential to narrate history effectively to a viewer through photographs as the visual medium is a strong, thought-provoking analytical tool that is capable of catalyzing strings of interesting thoughts, which when analyzed, can bring out varied perceptions and interpretations of a continuously changing past. Photographs also represent the personal concerns of the photographer. These concerns can range from the exploration of historical issues to the expression of the photographer’s emotions or of aesthetical values, which becomes a receptacle from which viewers draw meanings.

The authors have just graduated from the M A (Communication) program at the University of Hyderabad. They can be contacted at harini747@gmail.com and chetan.sjc@gmail.com. 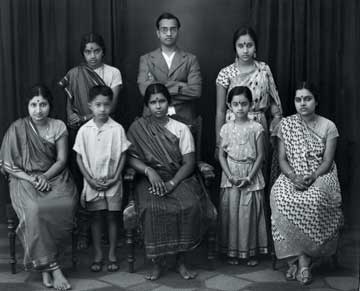 Ask your students to bring in an old family photograph, like the ones above or try to get an old picture from a web site or a magazine. Show the students the picture, and ask them to study it carefully. You could ask them to imagine that they have found the photograph inside an old book that they borrowed from the library, and are trying to find out where it came from. Collectively or individually, you could address the following questions.

How would you describe the picture in a caption?

What does the picture show?

What does it tell us about the customs of the time it represents? For instance, can we surmise anything about the role and position of women in society and within families from the way the people in the picture are arranged?

Can you tell what the photographer is thinking, or how he was instructed?

What other artifacts are present in the picture and what do they tell you about the period and about this family?

The students will probably come up with many more questions on their own. Based on the discussion, get them to write a short essay or story, imagining the time at which the photograph was taken.