The ordinary apparatus of historiography is most at ease when made to operate on those larger phenomena that visibly stick out of the debris of the past. A critical historiography can make up for this lacuna by bending closer to the ground in order to pick up the traces. – Ranajit Guha1 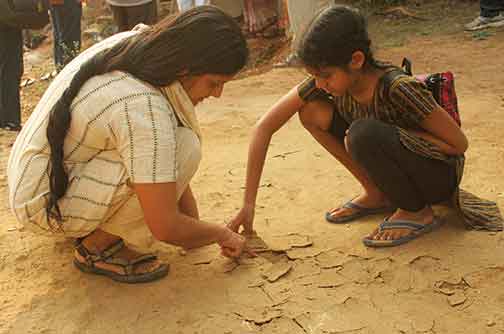 One day as my daughter and I sat down in Ponduru, we found in our hands a piece of the ground. It was coming off like puzzle pieces, revealing a layer of moist earth underneath. Someone had laboured to spread this layer on the ground outside their home. It was easy to pick off, and so hard to resist doing so. What lay beneath? Why had the two layers dried differently? What were they made of and why?

A few neighbours gathered, perhaps amused by our curiosity. They had laid this ground, or ground adjacent to it. On ground like this they had learned to walk. They thought no more about it than second-generation city-dwellers like ourselves think about the tiles in our house.

But here we were, observing the different properties of the layers of ground. The upper layer was made of cow dung, and we could still see some grass in it. “The cow did not chew properly,” my daughter remarked. Why had they spread the cow dung in front of their home? Fertilizer? Good luck? “Antiseptic,” we heard someone say. How would we know? Could we test these three properties?

Fertilizer, being the most widely known use of cow dung, was also the easiest for us to test, having had some experience with it in our own garden. Last year we collected dung from a local cowherd to make gobbemmalu for Sankranti. Afterwards we used these in our garden and saw a marked difference in the growth and flowering of the plants, especially the bougainvillea. We could easily repeat this and even do a controlled experiment using dung in one part of the garden but not in the other. How to design a test for good luck? Or antiseptic? How would these tests, and our interpretations of the results, differ?

Feeling the pieces of ground, we saw how the top layer had dried, cracked and curled up at the edges, almost inviting us to pick it up and examine it like a puzzle piece – or like countries and continents. We could make pieces drift apart or come together, as if the moist earth below was the ocean.

Lifting one layer of dirt had sent us far back in time.

What happened here?
Sometimes we play a little game. Let’s call it “The History Game.” At home or outside, we look around and ask, what does what we see tell us about what happened here in the last few hours? Or the past few days? What is our evidence for saying so? How reliable is this evidence? Could someone conclude something different from the same evidence? What might possibly make us doubt this evidence? What alternate explanations are there?

We once asked these questions about a pile of leaves, just a few feet outside of our gate. My daughter said, “this pile of leaves has been here for weeks. I have seen it here many times before.” Pointing out the different kinds of leaves, she added, “the leaves have come from near and far trees because, see, this kind of leaf did not come from any of these trees here.” So we talked about how they might have arrived – by the wind? Or did someone sweep them? How long would such a neatly swept pile stay that way? How often do leaves fall? Now did we still think that the same pile of leaves had been there for weeks?

My daughter asked, “Why would anyone want to know the history of a pile of leaves?” 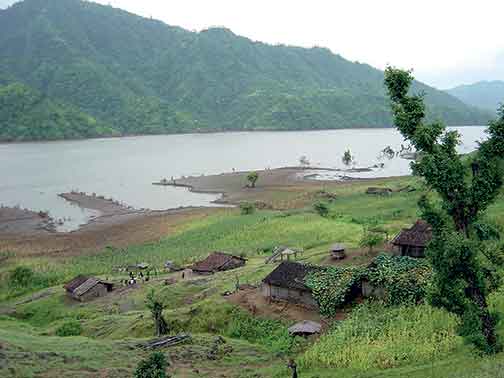 The lie of the land
“As it happens,” I warmed to my story, “several years ago, an important question was answered by asking similar questions about a pile of junk in a particular village in the Narmada Valley.” People living in the Valley were told by the government that their village was not in the submergence zone of the planned Sardar Sarovar Project, and therefore they were not eligible for rehabilitation. The villagers did not believe this, but no one was willing to listen to their side of the story. It was their word against what was in the government records. The indigenous people were unlettered, and spoke the language Pavri on one side of the river, and Bhilali on the other. Together, they had weathered rains, floods, and had observed the changes in the Valley as each inch of the dam came up. They had lived there for generations, worked the land with their own hands and honoured the river as their mother. They knew that the Narmada would rise more than the level forecasted by the Central Water Commission. To challenge the government engineers however, they would need to prove it.

It turned out that the location of a particular collection of debris yielded evidence concerning the level to which the Narmada river had risen during the floods of 1970. It matched levels indicated by people living on the other side of the river. With that piece of data, the people living in the Narmada Valley challenged the government survey records of their villages, that had erroneously resulted in a lower flood level calculation. Accurate land records were crucial for the people”s struggle over land rights and rehabilitation2. To plan for the future it was vital to know the past.

These bold words on the study of history come from the Central Board of Secondary Education3. But how many students experience history this way, whether in school or out? Are teachers and students encouraged to criticize and enquire? What if the critical enquiry led us to question the very statements presented as “facts” in our history books? Why these facts and not others? Are these facts even facts? What if they are lies?

What if a historian did for Indian History what James Loewen did for American History? He not only identified lies told and retold in history books but also in museums and monuments across the United States. His two books, Lies My Teacher Told Me and Lies Across America have helped teachers and students seeking to bring out other stories, to challenge the heroic national narrative, and recognize the aspirations of people working against the grain of that narrative, or even crushed in the process. Closer to home, journalist Raza Rumi has written critically about the textbooks of Pakistan.

Indian history textbooks have undergone an overhaul since I last taught from one 20 years ago, when I found myself explaining and apologizing to students for inaccurate, inconsistent, and injurious statements in every chapter. Today’s NCERT history textbook offers a refreshing approach to the study of history. The book itself acknowledges the limitations in our knowledge and invites the reader to question sources of information and to interpret from diverse perspectives.

And yet …
Are students today asking questions in the class? Or are they waiting for the “Question Answer” sheet to be dictated so that they can prepare for the exam? Can you guess whether the following statements come from a primary or secondary, private or government, elite or international school?

“The only questions I heard asked during my classes were about whether the material being covered that day would be on the exam.”4

“[Students tend to] focus on recalling the content of the varied materials they read rather than analyzing them as historical evidence.”5

The first comes from Thane Richard, a student of St Stephens College, University of Delhi and the second from Victoria Brown, professor of history at Grinnell College in Iowa.

To encourage students to overcome this tendency, Victoria Brown has written a history textbook Going to the Source, that would help students practice history, to think like historians rather than simply read the works of other historians. The Central Board of Secondary Education expresses a similar vision. Here is the introduction to the history syllabus:

The syllabus would help them understand the process through which historians write history, by choosing and assembling different types of evidence, and by reading their sources critically. They will appreciate how historians follow the trails that lead to the past, and how historical knowledge develops.6 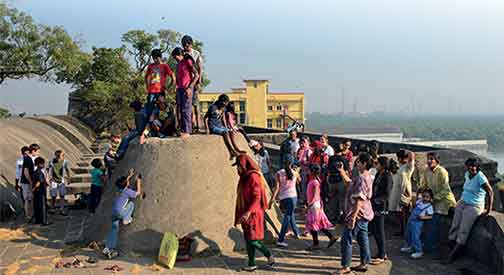 Follow the trails
Must this approach to history wait until the secondary school or college level?

Reading sources critically involves just the sorts of skills that children exhibit from the time they become verbal. Why? How do you know? Who said? But … What if? Answering these questions requires us to go backwards in time – to explain what came before, and how that is related to this. Children are actually begging for history and answering such questions is our first opportunity to follow the trails that lead to the past.

A persistent “why?” or a sharp “how do you know?” from an upstart toddler makes many an adult cringe. Yet it is this inquiring spirit that blazes the trails to the past by making us remember explanations for customs and procedures we have long taken for granted. Will they withstand the questioning? Or will they have to change? What is history for if not for social change – beginning at home? When we see that potential at home, we gain courage to practice this in the world, to question authority and believe and to have the courage to search for the answers, even as each answer leads to a further question.

It is easy to blame history books and history classes for the dullness of history. But would classes be dull if students could talk back? If students could say what came to their minds, without the fear of looking dumb or distracting from the lesson? Many teachers recognize the value of the student’s skepticism and offbeat questions but shush them out of pressure to complete the syllabus, even if that very syllabus calls for the encouragement of critical questions.

In fact, it is the refusal to entertain irreverent questions, especially from young people that dulls the sharp inquiring spirit which children express almost as soon as they learn to talk. The National Curriculum Framework textbooks call for that inquiring spirit – in history as well as in science. The former director of NCERT, Mr. Krishna Kumar says, “The books are based on the recognition that the children construct knowledge with the help of experience and activities. In every area, from science and maths to social science and language, children must be given a space to reflect, ask questions, wonder, and probe sources of knowledge outside the textbook.”7

I have witnessed the potential of freedom from the expectation of giving the right answer. We don’t even realize how much this expectation colours our response to the content of textbooks until we see someone who has not yet absorbed this expectation. A child who is not yet used to the idea that what she is supposed to do in response to a question appearing in a textbook is to “get the right answer” or even answer the given question, may offer a whimsical answer, ask an entirely different question, or find fault with the given question, going off on detours from which s/he may or may not return, sooner or later, to the route mapped in the syllabus. What happens when a child does this? Do we encourage them, listen to them, follow their train of thought? Or do we steer them back to the syllabus, and to the (right) answer and on to the next question?

If we do the latter, we will be growing colder and colder on the trails to the past.

The author is a mother and a worker for human rights and sustainable livelihoods, with the Association for India’s Development. She is part of Swashikshan: The Indian Association of Homeschoolers. She can be reached at paravinda@yahoo.com.