I was present recently at a discussion among senior school students and their teachers regarding the image their school had among the general public. Much was said, but I observed that the opinions expressed indicated the values that the speakers held dear, the culture they saw desirable as representative of their institution. In general, the tide favoured appearance as unarguably important in the culture of their school. So the uniform, the grounds, the gate, were focal points in the ideas presented. Initially, I was somewhat dismissive of such superficiality as cultural expression, but I reminded myself that these were mostly kids, and that even the teachers were on much the same page as their students in these matters. For them, school culture was inseparable from appearances.

However, it was not quite that simple. I remembered an experience I had as head of a senior boys’ English-medium school some years ago when we, the staff, decided that it would help the parents a great deal if somehow we could make the uniform less expensive. (A rise in pay-scales had just forced us to raise fees.) So we suggested a white pajama-kurta and the school badge as the only uniform items, the whole to be optional – wear the traditional uniform if you like. It was announced as such to the 400 or so youngsters involved, and the reason for the innovation explained. 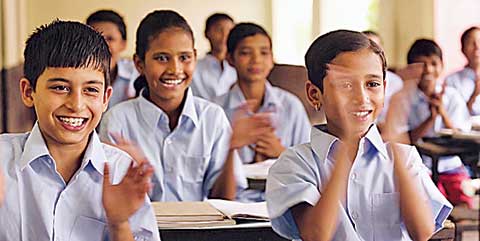 First, a large number of miffed parents came to the office to complain about the implied insult to their children. Ye gods! Second, about 50 or 60 accepted the option, though they were clearly not the poorest kids in the senior school. And third, after about three months, gross graffiti in white chalk appeared on the scarlet wall of the school visible to all parents. The graffiti thing was dealt with, the wrong-doers identified, among whom the majority were pajama-kurta youngsters. Within another few months the same thing re-occurred, the culprits identified, the issue closed – except for one thing. In each of the groups responsible for this misbehaviour (not the same boys) the majority were pajama-kurta-choice youngsters. We felt compelled to withdraw the option. And the opinion of both the other senior boys and the staff was, compulsory if expensive uniform is a necessary part of school discipline. To be publicly regarded as belonging to a prestigious institution is a cultural issue.

Everything about the culture of a school depends on the leadership. Which is to say – importantly – that it be in fact leadership, not administration. My experience is that this is a frequently blurred distinction. Administration can be and often is done by the book. Leadership means being in front, going somewhere new and identifiable, and making sure that one is followed on one’s way.

In my experience, however, principals mostly administer. I understand that they are often reprimanded if they go beyond administration. There are a thousand wolves ready to howl objections! But the individual teacher has much more freedom, and in her/his territory there is a wide choice of routes to follow with a view to imparting value systems to her/his charges. One teacher I know, for example, refuses to supervise her high-school girls when they do exams, telling them that she trusts them to simply do their best. In fairness I need to add that in this she had the encouragement of her principal, who simply did not have the room to make it a whole school policy!

For a school child in our underlying and pervasive culture of izzat to bypass the temptation to cheat in this situation was sheer heroism – and yet a big number rose to it. Much later in life I heard them tell about it, but regret that things in “the big bad world” did not lend themselves to maintaining this culture of honesty. Still, the cultural orientation had found its place in their consciousness.

My own experience was with male youngsters who found, as adults in business some years later, that in school, I, in Value Education classes, had set the bar too high. They explained that total honesty would simply ruin them financially! The good news was that the value system had been maintained – in other words, the culture of honesty had been imbibed – but the forces of economic reality had compelled some readjustment.

A powerful agent to help the school develop a culture that is collaborative, joyous and participative – all ‘devoutly to be wished’ – is the use of a modified version of cooperative learning. In this system of pedagogy, the class is in carefully-chosen teams of six or five, and the focus of the pedagogy is the child, not the teacher. Except for the actual membership of each team all decisions are made by the youngsters right from nine-year-olds onwards. The teacher decides on the team membership to ensure that they are academically balanced (school is primarily an academic institution after all) but thereafter the ball remains almost completely in the children’s court. They select their team captains with no teacher interference, they select the name and logo of their team – usually from flowers or animals or fish – and they encourage one another by promoting the smarter ones to help the less smart, and the slower ones to try harder. I’ve tried it – often – and it works.

A further ‘tool’ to help growth in the culture of the class is the simple factor of applause. It is amazing that this is not more widely explored. Teachers do complain about the noise factor, but many forget that noise is pretty much the youngsters’ normal medium. After all, out of school, most kids are so absorbed in their mobile phones they have little experience of silence. Silence is of course demanded when the teacher is actually teaching, and when the children are actually being examined non-verbally, but their métier outside these functions is comfortably noise. So I have discovered that team-applause for correct answers, for creating and/or presenting an item during a class concert – the applause rendered for these little achievements goes a long way towards boosting in the class a culture of team-work, a culture of proper pride, and of course a culture of cooperation and participation.

Sadly, many schools avoid highlighting the issue of individual freedom, and while class and team achievements are indeed to be celebrated, little is done to foster a culture of independence and self-dependence in schools, largely because I think teachers are nervous as to where it might lead to. It does imply that the teacher leaves herself/himself open to the unforeseen, the unexpected. Let me explain.

In any class, but increasingly in the upper classes, children become aware of issues in their own lives. Questions mount in their minds on every conceivable topic and issue. I have found it very helpful to structure a 40-minute class like this:
1. “Talk to one another about anything for a minute or two.”
2. “Ok, silence now. Does anyone want to make a statement or ask a question about anything?” 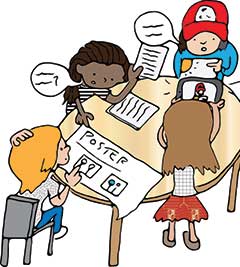 That’s it. Questions will come about matters the teacher may know nothing about – I have been asked what causes black holes. I answered that I did not know, and that their science teacher would be the right person to handle that. I have been asked about a dozen aspects of things to do with sex, and I give them a solid lesson in what it’s about, reminding them in the punch-line that out of that sperm (one of millions unlike one another) and that ovum (one of millions unlike one another) the zygote is formed, and that this zygote eventually becomes you, specially chosen by a loving God into existence to change the world for the better. I have been asked about marriage, and reminding them that learning how to handle all sorts of relationships is the best preparation for it. I then suggest to them to read about it, study it, and ask respected people about it within or outside their families.

This builds a strong culture of independence in the girls and boys. They appreciate their freedom, and there is a noticeable growth in self-confidence.

By the same token, it is helpful if the attention of the children is focused on things of beauty. I have often wondered to myself as to how it must be impossible for a child to grow up in, say, the Himalayas without having a relationship with the stars, or in Kurji on the banks of the Ganges without a deep appreciation of the power of rivers. But this culture of natural beauty in all its various forms needs strengthening by a teacher, not by her/his knowing a great deal about it, but simply by getting the children to notice it. They develop a culture of natural majesty that will abide with them a long time.

Building a culture among youngsters can be accidental, but like many other facets of school life it prospers when such a culture is consciously cultivated. And so, the teacher needs to be aware of her/his own culture, and of how she/he can help the children adopt it, mutatis mutandis. Not just the example but also the words of the teacher are hugely important, even if she/he thinks at the time that she/he is getting little attention. As one famous educationist commented, “The good seed will grow up later on.”

The basis of every nation’s culture is its unthought-of response to life’s interpersonal or public stimuli. It reflects an inner attitude to self and life in general. Cartoonists and comedians build repertoires on this. Audiences, viewers, recognize this and respond with understanding – anger, laughter, envy, acknowledgment. The cartoon, the comedian’s crack, reflects the common trait of citizens.

Our Indian response to such stimuli is what we now call the izzat factor. There is no one English word for it, but our dictionaries translate it as a combination of status and prestige. We are “unconsciously conscious” of it in all our interactions. In this context it accounts for the stress our students experience before, during and after exams, as well as other occasions.

A Class VIII boy told me that if he failed his promotion exam into IX this would happen: My mother will cry, my father will punish me, my khandaan (caste) will denounce me, my teacher will say ‘After all I did for you’, my Principal will say ‘You let the school down’ and the neighbours will tell the other girls and boys not to play with me, I am a failure.’ (I summarise.) I have seen all this happen.

We still follow the old British system of examination, hence our publicised pass and fail results and clinical report forms and so on. We prefer a teacher-centered system to a child-centered system. The children learn to trust nobody except their single selves. We employ many inadequate teachers and occupy over-crowded classrooms. Our syllabi are vast. “Hamare izzat ka savall hai.” Is it any wonder that we have, as a nation, the highest student-suicide rate in the world. My prayer is that readers of this magazine will take up these issues constructively.

The author has been teaching at street, school, college and university level in India for more than half a century. He can be reached at macbren82@gmail.com.