“The school day, week, month, term, and year need to be planned for a mixture of routine and variation, as children need a little of both, and the kinds of learning we would like them to experience have different requirements”….pp 97, NCF (2005).

This statement makes it clear that organizing experiences using a time-table at the school level needs to be flexible, not static or rigid. But what happens in reality?

This article is based on my experience of framing a time-table at a higher education institution at the University level for two years and my visit to government and private schools during my internship of B.Ed, B.El.Ed and D.El.Ed programme in the last five years. My arguments are largely embedded in the ‘social’ notion for the importance and complexity of particular subjects. I suggest that the framing of a time-table effectively serves a positive purpose in the curriculum. It must be stated at the outset that I am not generalizing my experience to every school and their respective time-tables. 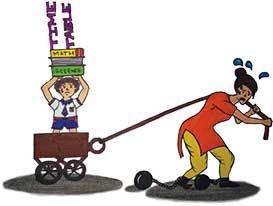 Theoretically, we know that a time-table is a tool for organizing the teaching-learning process in a school, for bringing curriculum to the students and for the effective working of the school system. One of the important tasks performed by a time-table, besides organization, is the allocation of resources (i.e., teacher’s time, pupil time and rooms).The reason behind this is that a time-table provides the framework and the direction in which school work can proceed as it helps properly distribute work and resources among teachers and students.

As the framing of a time-table depends on several conditions, factors, aspects, and principles, it is generally considered one of the most difficult jobs of school administration. There are many principles which govern and regulate the framing of a time-table. Some of them are relative importance and difficulty value of subjects, incidence of fatigue, principle of play and recreation, maximum utilization of resources, principle of elasticity, etc., (Sandhu, 2000).

This article is not about the ‘principles’ themselves but rather about how we are deviating from the principles to the popular conceptions of the subjects and ultimately how it is affecting the framing of the time-table. I will be reflecting on the following questions:

Telling our students the sequence of the subjects at the start of the session is the most common thing that occurs in school. But how is that sequence decided? Do students, parents, teachers, or higher authorities decide that sequence? What are the factors influencing the sequence? Most often, I have observed that the subjects which are considered difficult and IMPORTANT are given a slot in the morning session. Why have I highlighted the word “Important”? One of the principles of framing a time-table is that difficult subjects should be kept in morning periods considering that children are mentally active, and hence not tired at that time. But, there are certain social and economic factors that determine the importance of a subject. Excerpts from my classroom discussion on the critical analysis of their school time-table while teaching ‘Knowledge, Disciplines and Subjects’ paper to B.Ed students:
Student 1: In my school, science, maths, and English were generally kept during the first half of the day.
Student 2: SUPW was generally considered a free period in my school.
Student 3: Lab classes usually occurred in the second half of the day.

It always emerges in the deliberation that science and maths are considered more important than others subjects because they are associated with job opportunities, career growth, and status in society. This notion also violates the principle of fatigue. As students are continuously studying the IMPORTANT subjects, they get tired easily and this stifles their creativity.

My next argument lies with respect to the placement of scholastic and co-scholastic areas in the time-table. Co-scholastic areas (life skills, work education, visual and performing arts, attitudes and values, co-curricular activities, health and physical education) are mostly kept in the afternoon slots (i.e., ranging from period 6th to 8th/9th). Work education doesn’t get a proper place in the time-table, and this has been argued in a Position paper on Work & Education, NCF-2005, pp 9 – “Its design of curriculum focussed on learning from textbooks, fragmented view of knowledge, time tables, periods, evaluation parameters, examination system, value framework, and lack of respect for the sources of knowledge from outside the classroom are amongst the factors that become obstacles in the path of transformation.”

An English teacher at a government school, west district, Delhi, said that “SUPW class in the 9th class time-table was placed in the 5th period (11:05 am to 11:40 am) just to give a break to children after continuous study for four periods. 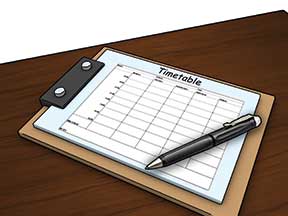 In one of the private schools I visited, the principal was quite inclined towards the visual arts, and this was reflected in its curriculum, and hence was given prime importance in the time-table along with the scholastic areas. The outcome of this was evident through the various trophies, awards kept in the principal’s room and also, through the work of students displayed at the corridors.

Hence, the vision of the various stakeholders in the school system also affects the curriculum.

The recess/lunch period has always been a part of the time-table for as long as I remember. The rationale for introducing recess is quite simple – a child needs a break after reasonable amount of work and to make them more productive. “Politicians and School administrators” often use the first argument – recess is a waste of instructional time-to demonstrate that they “mean business” in making school more effective” (Pellegrini, 2008). This statement gets reflected at the ground level in India when we see that the time of recess generally varies from 20-25 minutes and only once in a day. NCF (2005) also argues that the time-tables that do not give children enough breaks to stretch, move and play, and that it deprives older children from play/sports. This is one of the common sources of physical discomfort among children. My suggestion for improving this would be to enhance the frequency of recess periods instead of having a single recess; this would lead to better results, improve the concentration, and attentiveness of children. This argument finds support in the work of Anthony Pellegrini – author of Recess – Its role in Education and Development”, where he showed that more frequent recess breaks lead to more attentiveness of children in the classroom. This is illustrated by the experience in Finland where students are given several recesses daily in their time-table and students have shown a remarkable performance (Walker, 2014).

The way ahead
The load on children is not just physical. The amount of learning that is there for all children, irrespective of the category or type of schools where they study (Learning Without Burden, 1993) is also a burden. We can try to minimize this load if we frame the time-table keeping in mind the needs of children, rather than simply following an age-old norm.

The time-table is not only a structuring device but also a tool to aid in the over-all development of the learners. A creatively designed time-table can help challenge the certain notions prevalent in society which are related to the importance of ONLY certain subjects like mathematics and science. The time-table is a powerful tool which can help children gain the space and time to reflect, to explore, to question all that they do or learn in school.

The author is Assistant Professor at Shyama Prasad Mukherji College, University of Delhi. She can be reached at ymanisha23@gmail.com.