I told them that I am in a mood to measure my body to see how big a box I will need (to be fitted in) when I die. So I have got some thread. Will you help me? 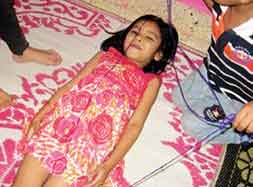 But children are so unkind nowadays – they gathered around me and said that they wanted to help me but first they wanted to measure themselves. So, they went ahead and started the job. ‘We decide’ was written large on their faces.

That one question was enough to set the room on fire – hands, feet, fingers – all things in the room, including their own selves were flattened against stuff – we had begun!

I took a ball of thread and was wondering how I should give it to them. What if they tangle it all up? Should I give them a specific length?

To make my task easier, I asked them to decide. Finally, they decided that each one of them should get a specific length from the ball. After that, pandemonium ensued. 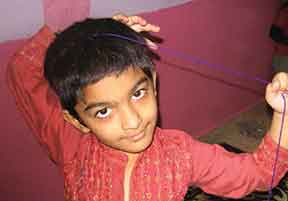 One boy kept the thread on his head and bent down to reach his toes. The thread on the head kept slipping off. He made several attempts to measure himself and finally he got upset and snorted “WHYYYY is it not sitting on my head?” I suggested that he could take his friend’s help.

Suddenly, one child asked how she could measure me since I was taller than her. Before that query could sink in, another child chipped in by saying that, “Aunty will lie down on the floor”.

So I lay down on the floor. One child held the thread at the foot with one hand and with the other passed the thread along my body to reach my head. It was a pleasure to see the other kids watching and waiting for their turn. By this time, one child was measuring a circle on the floor, yet another measured the board and compared that with the circle and concluded that the circle is bigger. 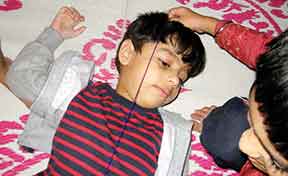 One child tried to measure his head with the thread and some of them were trying to measure their heads with their forefingers and simultaneously trying hard to reach the back of their head. Then one child lay down, put both his hands on his forehead, and after reaching the ears, he placed his head sideways and touched the floor with his finger, marked it and then got up to measure the floor to connect.

This whole act continued with the children measuring many more objects and on the next day, I heard stories about how they used threads, fingers and carrots at home to measure things.

At the end, I realised that learning and teaching about measurement this way, perfectly fitted into my box of unschooling!