Exactly a year back, in February 2010 we carried an article on Theater for Children, its importance and relevance. A year later, we revisit the subject and see where Theater in Education as it is popularly known, stands in India…

The National Focus Group Position Papers on all aspects relating to education are a great repository of ideas, theory and guidelines for teachers, to understand and proceed with the teaching of different subject areas. The position paper dedicated to Arts, which deals with theatre and why and how it may be incorporated in the classroom, invokes what is called the ‘Sensitivity Pyramid through Drama’. Establishing Self Realization or seeking truth is the ultimate goal of human beings, and how art, and in particular the art of drama helps one to achieve this.

For those who’ve experienced the thrill of being on stage or performing in any capacity in front of an audience, needn’t be convinced about the magic that is theatre. However, many of us have remained deprived of this pleasure owing to different reasons – may be our teachers didn’t think we would be good enough; or the character needed a certain look; or we were too shy to audition – or perhaps our school or college just did not have the avenues for us to express, explore or even know that there could exist another facet to our personalities… 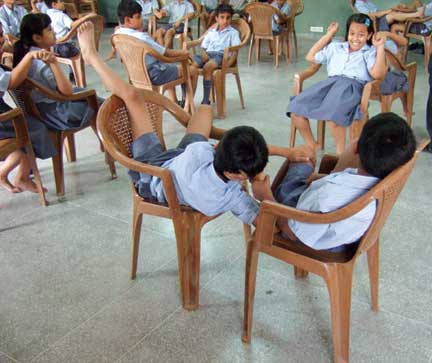 Fortunately, the scenario is changing – with greater attention being paid to education at the popular level, and increased demands from parents on schools to have better extra-curricular facilities, drama is seeing a revival of sorts. For theatre enthusiasts and professionals, this means an opportunity to venture into the territory of TIE or Theatre in Education.

However, the presence of TIE is not an entirely recent phenomenon. The name of Barry John, better known for his acting school – TAG or Theatre Action Group in Delhi, alumni of which include the likes of Shah Rukh Khan, Manoj Bajpai, Shiney Ahuja and the recent entrant into Hollywood Frieda Pinto, is a seminal one for the Indian TIE scene. In Barry’s words, “Drama was a great facilitator between the parent, teacher and the child as an interactive exercise to behavioural problems.”1 Barry John ran the TAG TIE Company from 1991-1995, during which time a number of people passionate not just about theatre but also how it impacted young lives joined hands with him. One such individual is Sukhesh Arora.

Sukhesh joined TAG TIE as backstage crew and imbibed a lot as an apprentice. Having taught drama in Africa and studied in England, primarily an actor, Sukhesh’s exposure to TIE had him hooked to the extent that today he has almost given up on acting and runs the Yellowcat Theatre Company. The website of Yellowcat reads “Since it was set up in 2005, Yellowcat has established a unique position for itself through the pioneering use of drama and theatre in the educational context.”2 Typically, Yellowcat works with schools for an entire academic year, providing intensive support in the form of a trained resource person. The aim is to integrate the school curriculum with drama – i.e. transact part of the curriculum through dramatic means.

Sukhesh has however chosen to take his involvement with Theatre in Education further – he also teaches at the Delhi University run Bachelors in Elementary Education program. The 4 year long program is significantly different from the regular B.Ed. program and includes drama as a practical module in years 1 and 3.

He also explains his preference for the term ‘Drama in Education’ as opposed to ‘Theatre in Education’. ‘Theatre’ he says, has this element of performance, which is how the role of the art of drama has traditionally been seen as. That is to say, performances solely in annual concerts or school fests, with a ready script and heavy focus on rehearsals. ‘Drama’ instead, has the element of improvization and spontaneity, hence more creativity, since it doesn’t depend on a pre- prepared script. Sukhesh also indicated that the TIE and DIE difference is a British and American one – with India having appropriated the British TIE.

Yellowcat, Sukhesh tells us uses a much more embedded range of activities for children to participate in. This certainly seems to be the trend. For instance, the National School of Drama, New Delhi also has an active TIE unit. Descriptions of their most recent productions by children suggest that they too follow this explorative and derivative structure of creating a script, rather than use prepared performances.

Drama is increasingly being fit into the time-table and forms a rubric of personality development or self development, Sukhesh says, although he isn’t too fond of the terms. The aims are to get children less inhibited and help them express their selves, aspirations, fears, desires – and this happens best when the method is that of process drama as opposed to rehearsed. Introducing children to local and national cultures is another aim of drama in education, as also spelt out by the position paper on art education. Thus, Sukhesh tells us renditions of the Laghu Mahabharata are particularly popular. 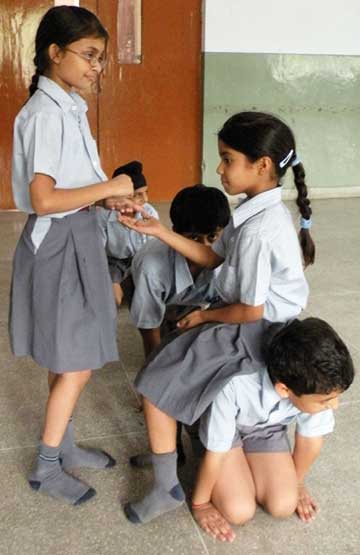 There has been quite a lot of resistance by English medium and in particular elite schools to allow for bilingualism in the workshops conducted. Sukhesh however, is in favour of the use of Indian languages. Research on issues such as identity and language would suggest that this in fact should be encouraged – language being an intrinsic part of culture is an intrinsic part of a human being’s personality and to be disconnected with or assign secondary importance of one’s mother tongue has serious implications for the survival of both the language and culture in the generations that are to follow. Besides, it has also been proved that proficiency in one’s mother tongue is beneficial in the development of second/third language acquisition.

Spending 20-24 hours a week in a school throughout the academic year, dealing with children of various age-groups and backgrounds, Sukhesh has uniformly encountered a lot of affection and fondness. At times children, who have initially shown inhibitions to the point of hostility, have come around to acknowledging the Yellowcat ‘teacher’ as their best friend! Serious issues like sex education and bullying have also been dealt with in role play exercises.

The position paper accords a very important role to the teacher as far as drama is concerned. Sukhesh tells us that on many occasions teachers themselves may be inhibited and that they need to be worked with first. Many times the perception that teachers also have is that theatre is something too performance-oriented which is an expert’s domain. This often puts off a lot of teachers. Sukhesh’s solution for this would be to get the teachers involved in workshops with activities to experience how drama is ‘done’ and to encourage them to experiment.

The possible pedagogical value of TIE is yet to be explored to its fullest potential. However, language, environment, social sciences are parts of the curriculum that can be easily transacted through drama.

Drama in schools also sensitizes children and young adults to the art of drama in general, which has a marginal presence in the country. Plays such as A Disappearing Number, (a play devised by the UK-based Théâtre de Complicité Company, on Mathematics, inspired by the collaboration during the 1910s between two of the most remarkable pure mathematicians of the twentieth century, Srinivasa Ramanujan, a poor Brahmin from South India, and the Cambridge University don G.H. Hardy3) introduce to young adults specially the spirit of philosophy, mathematics and science through art and thus helps them connect to the world of academics in a much richer and holistic manner. Theatre appreciation is thus an equally important goal.

Sukhesh is currently working on a manual for teachers, commissioned by the NCERT which would be a repository of drama exercises and activities, for ready reference, in case they feel they are short on ideas. This flurry of activity however, is again unfortunately region specific. Delhi, Bangalore and Mumbai are currently metropolitans where DIE has taken off. Other cities are still catching up. Sukhesh is positive that this is not a trend or fad – drama is the buzzword now, but hopefully is here to stay! 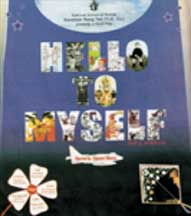 The ‘devised’ play dealt with the issue of knowing oneself better and befriending one’s uniqueness. It gives us the feel of the immense and intense intricacies of growing children – the many complexes that are present within them for valid reasons of their own; the umpteen moments of happiness and failures; the multiple attempts by these children to overcome all these hurdles, and most of all, of the sense of triumph experienced by these children when these hurdles are overcome.

Rajinder Sharma ‘Nanu’ was Assistance Director and the play was devised and directed by Tripiurari Sharma.*