I begin this article with a short poem, When I Heard The Learn’d Astronomer by Walt Whitman, which I would like you to read aloud to yourself.

“When I heard the learn’d astronomer,
When the proofs, the figures, were ranged in columns before me,
When I was shown the charts, the diagrams, to add, divide, and measure them,
When I sitting heard the astronomer where he lectured with much
applause in the lecture room,
How soon unaccountable I became tired and sick,
Till rising and gliding out I wander’d off by myself,
In the mystical moist night-air, and from time to time,
Look’d up in perfect silence at the stars.”

This poem exemplifies the difference between the mathematical/scientific approach to a subject and the literary/poetic angle. Whitman, being a poet, is naturally biased toward the non-technical approach. He is allergic to proofs, figures, charts and diagrams “ranged in columns” – all things arrayed in perfect, military precision that would gladden the heart and the “little grey cells” of the detective Hercule Poirot himself.

Wearied and sickened by the scholarly astronomer’s clinical perspective on the subject, he “glided” away, his movements mirroring his mood, and glanced up to refresh himself with the sight of the stars. “In perfect silence” implies the meditative mood, a complete absence of analytical thought and comment. His mind is at peace and bathed in soothing silence after the lecture full of instructions on how to dissect ‘add, divide and measure’ the wonders of the night sky. Immersed in the “mystical moist night air” – far from the overdose of dry facts injected by the lecture, he continues to study the subject by direct observation. He looks in “perfect silence” at the stars. The line suggests that he drinks in the cold, pale beauty of the stars against the soft darkness of the night sky, in silence, without feeling the need to comment, qualify, analyze or otherwise dissect them. A reflective poem, it underlines the need to look at things as they are in all their “quiddity” instead of analyzing them to death. 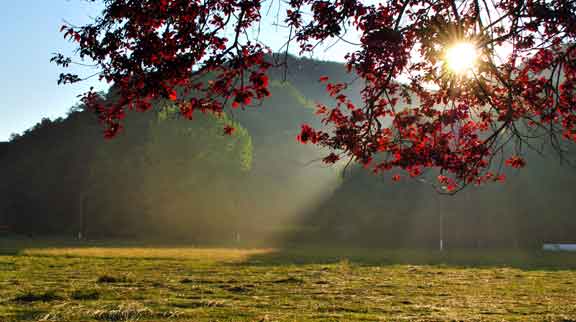 In the light of the fact, as this poem suggests, that arts and sciences look at the world differently, I was pleasantly surprised to discover the latent poetry in a group of engineering students from Thodupuzha, Kerala, who were attending a class on communication. The group task they were set was to describe abstract concepts in a concrete way, using the five senses. So apt and evocative were the images the students used to “describe” abstract nouns such as “anger”, “loneliness” and “hope”, that I must highlight a few of them here:

The changes brought about by “revolution” was described as “the awakening of tides”; sorrow pictured as “a leafless tree,” “melancholy music heard from a distance” evoked the sounds of loneliness, hope was like “first rain” for a farmer, and smelt like “chicken curry in Somalia”. Anger was blood-red, sounding like a “war trumpet’, and peace was white, like snowfall in summer. Considering the general tendency to think in clichés, the similes these students brainstormed were surprisingly original.

So what can we conclude? Can man live by numbers alone? Is language just a tool for business-like communication? Why do we ignore the fact that words have such tremendous power to unlock concepts, arouse memory and plumb emotional depth. In a day and age when the ”successful” student is focused solely on language as a superficial means of clearing the “verbal ability” cutoffs in an entrance exam or impressing the moderator in a group discussion, it is time for teachers to remember that the word is packed with power. Far from being mere functional instruments that we use routinely like a toothbrush in the morning, words are the “skin of our thought”, as writer Arundhati Roy once put it in a press conference. Therefore, they contain all the depth of thought, the weight of memory and the motivational magic that advertisers strive to harness and control in order to make money.

Words, and the images and memories of reality they call up refresh the mind and spirit. Like water in a desert, they are desperately needed by students who are starved of food for the mind and spirit. They inspire, motivate and awaken the inner learning creature that can only be sustained, that can only grow and develop on a steady diet of meaning and symbol. And paradoxically enough, as the poem suggests, words also point to what lies beyond them, the world of wordlessness, where the human being learns to exist in silence, apprehend in silence, feeling the reverberating power of perfect silence.

The author is a journalist and teacher, having worked at The Indian Express, Hyderabad and at The Sunday Leader, Colombo. She was also the head of the English department at The British School in Colombo. She now works as an examiner and a teacher trainer in Kochi, Kerala. She can be reached at [email protected].