The demand that teachers ought to be reflective practitioners is in vogue in some quarters of our population these days. Being reflective necessarily involves observation and evaluation of one’s actions and theories informing these actions. Ironically there is also a growing impatience with theorizing because excessive theorising is deemed inefficient. Typically in teacher education programs, teachers are taught how to teach, so they can get down to the business of teaching. These conflicting ideas, both in vogue, pose some rather interesting and difficult problems. 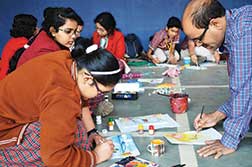 An abstract response to this conflict is that theorizing is necessary, but there is such a thing as excessive theorizing. One could say that theorizing has its limits beyond which it takes us too far from action. We need to know the limits of theorizing required to engage in reflective action. But where might those limits be? How do we determine the limit of necessary theorizing? It would help to take a specific example of the need of reflection for a teacher, so we can assess these necessary limits.

Let’s imagine a teacher who walks into her class and without fail finds children being noisy and unruly. She responds with a series of actions – walking in a way that her presence is felt, staring at students, putting her books down noisily. This results in the chaos subsiding, students seating themselves and quietly paying attention to the teacher. Let’s say the teacher reflects on this state of affairs.

She would imagine at least two possible reasons for the students’ behaviour – either they realize that class has begun, so they have to follow the agreed upon rules of a classroom which includes being quiet and attentive towards the teacher OR they think that the teacher ought to be respected or feared (or both). A reflective teacher would be expected to notice this pattern and attempt to find out which one of these is the reason for student behaviour. Let’s assume she keenly observes subsequent classes, converses with students and discovers that some students are indeed afraid of her. If she accepts this as a given and does not care to think further, we can say she is not being reflective. She is ignoring an issue of significant moral import – Is it alright for a teacher to cause fear (and hence subservience) in students?

To answer this question, she has to think of the objectives of classroom processes and her role in meeting those objectives. Needless to say, classroom sessions are means to achieving learning objectives defined in the curriculum, which in turn are determined from the aims of education. Development of individual autonomy is a central aim of education in democratic societies and fear of a position of power is inconsistent with this aim of education. Arbitrarily instilled fear amounts to indiscriminate exercise of power, which democracy deems as illegitimate.

If the teacher does not reflect to this extent, she is by omission allowing students to develop fear of authority. On the other hand, an attitude consistent with democratic principles could be that children follow the rules because they are reasonably convinced that classrooms are structured to facilitate learning; and so they feel obliged to follow classroom rules.

A reflective teacher has to make a distinction between externally enforced power and internalized obligation to perform her role in a morally defensible and pedagogically suitable manner. Reflection and associated theorizing ought to lead her to serious consideration of the aims of education and the grounds on which they are justified. A teacher ought to theorize at least to the extent of developing a clear understanding of the aims of education and be convinced of the aims. If not, she is not theorizing enough.

Similar morally significant issues pervade all educational practices. Educators have to constantly reflect on intentions that their practices aim to achieve, which in turn are manifestations of beliefs that they hold on particular issues. The act of reflection necessarily involves regulation of intentions and beliefs. Acts of reflection could result either in change or reaffirmation, modification or enrichment of the educator’s personal beliefs and her understanding of the aims of education. 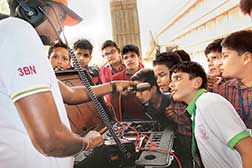 Education is a social endeavour, so educational practices have to be thought through and they ought to stand public scrutiny. This implies that the intentions and beliefs on which practices are founded, also have to bear the burden of public scrutiny. The demand for reflective practitioners has to be placed in this context. Practitioners should engage in the tedious, painful process of theorizing because it is a moral imperative and holds more value than mere efficiency. This kind of reflection should be a habit for practitioners.

Reflective practice is fraught with the possibility of encountering complex and intractable questions. In the example we considered, a reflective teacher is being expected to reflect why indiscriminate power is illegitimate in democratic societies. Answers to questions of this kind do not obtain from mere experience. Identifying normative questions, figuring out the grounds for justification for norms, employing the right method to examine theories and alternatives and then adopting norms in education is one of the core functions of Philosophy of Education.

But philosophy is perceived as (and taught as) an esoteric discipline that deals with complex, abstract questions largely removed from reality. The eloquence of philosophers, the abstruseness of topics, and the high level of abstraction contributes to the view that this kind of theorizing is largely irrelevant to practice. The part that is relevant to practice is a slew of theories expounded upon by special people (philosophers) and so the way it is taught views practitioner-learners as passive receptors rather than reflective individuals. This view of philosophy encourages efficient rather than reflective practice.

The author teaches at Azim Premji University, Bengaluru. He can be reached at prakash.iyer@apu.edu.in.