Roughly 97 per cent of all unfrozen fresh water is groundwater. And yet common visualizations of ‘water’ include rivers, ponds, and rain. Groundwater is, as they say, out of sight and therefore out of mind. Or maybe not. Not for all of us anyway. As much as groundwater is invisible to those living on top of plentiful aquifers, those walking on drier land are painfully conscious of its value. In Kitui, Kenya, a variety of names is used to refer to groundwater and individual aquifers. These names usually describe the state of the aquifers, or how easy it is to access their water: such as Nthongo (dripping like a tear drop), Mbulutu (bubbling), Ngai Ndethya (Please God help us) or Kutumbasaya (stretch your legs – indicating that you have to wait for long before the spring recharges). 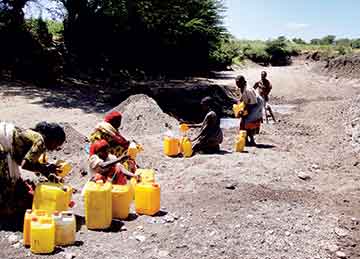 Appreciation and awareness of groundwater varies across the world. However, its importance to communities is universal. It is the key drinking water source for about half the world’s population, and is used to irrigate over 40 per cent of all commercial agriculture (~100 million hectares). India is by far the world’s largest consumer of groundwater, ahead of China and the US. Furthermore, almost everywhere in the country, more groundwater is pumped than is being replenished. This is certainly a big worry for a region that is home to the Indo-Gangetic aquifer system, the world’s biggest in terms of the population it supports. The concern is reflected in recent efforts to better map the system and design strategies to manage overuse and climate change, most notably by a British Geological Survey-led research group.

A key feature of groundwater is its accessibility to the poor and vulnerable. As governments and private companies struggle to reach piped water supply to remote villages and fringe communities in bustling cities, groundwater (tubewells/deepwells) is often the only affordable, easily accessible safe water source.

While the deeper aquifers are difficult to access, they are also relatively impermeable to phenomena that affect surface water resources, such as pollution and climate change. This makes them an insurance policy, a backup that can buffer communities during bouts of water shortage.

Apart from satisfying human consumption needs, groundwater also keeps the Earth together, and quite literally so. Aquifer systems provide the pressure that keeps the soil together. Take away the pressure, and the ground below your feet can cave in. This has happened to varying degrees over more than 17,000 square miles in the United States. The US Geological Survey puts over 80 per cent of this ‘land subsidence’ down to “human impact on subsurface water.”

Dr. Frank van Steenbergen has worked for over 20 years in water resource management and policy change in a number of countries. He is the Director of MetaMeta, The Netherlands.
Abraham Abhishek is a former broadcast journalist. He currently works for MetaMeta. Visit them at www.thewaterchannel.tv.