Despite the country’s meteoric GDP growth rate (about 9 percent), poverty in India is still pervasive; especially in rural areas where 70 percent of India’s 1.2 billion population lives. It is one of the fastest growing economies in the world and yet its riches are hardly redistributed across the population.

It spends only 1 percent of its GDP on health, half that of China, which is already planning on increasing its health allocation from 3 percent to 4 percent of the GDP. At the scale of the country, that represents a huge amount of money. While we’re comparing public expenditure, contrast this with Russia and Brazil, whose spending on health is around 3.5 percent of their respective GDPs.

But India’s government is well aware that poverty is a giant barrier to overcome if it is to fully develop the nation. A wide range of anti-poverty policies have been introduced since the 1950s, but their effect was felt only 20 years past their implementation.

If the decline in poverty went from 60 percent to 35 percent between the 70s and the early 90s, globalization and liberalization policies have made this trend go backwards in the 90s.

How? And why? Weren’t the effects of joining the global marketplace supposed to create growth? Why has India lagged behind China for so long? What went wrong?

Below the Indian poverty line
Poverty in India is measured by a poverty line that is probably one of the most disputed and incessantly attacked measures in the world. What’s more, the World Bank’s controversial poverty line has its origins in the Indian model. It is simply what some call a “starvation line”, a line that accounts for the feeling of satiety: measured in calories.

You may be eating bread all year and use up your body in a few years, you may be living in a flimsy house that flies away at the first storm, and you may not have access to clean water or education: all this doesn’t matter, does it?

Statistics (data accurate as of 2010)

The forgotten poor
Another problem is that of the huge segments of the population that are not included in the official poverty count, namely the dalits (the untouchables), women, and minority ethnic tribes.

They are groups that are marginalized in society and it’s more convenient for politicians to announce massive reductions in poverty by simply not including them in a census. It is easier to pretend they do not exist at all. However, it is obviously difficult to change the way an entire country and its society functions…

Right now, rather than trying to radically alter local customs and disrupt wider social dynamics in India, policies should find a way to take these factors into account. Otherwise, by allowing such groups to be systematically excluded, authorities risk massive social disorder and further tensions.

At the very least, recognizing the issue will help to address it by creating a debate and gathering solutions from across the board. How else would you tackle an issue if it doesn’t officially exist?

Current estimations of the number of people below the poverty line vary from 20 to 50 percent of the population – from conservatives’ to liberals’ estimations – precisely because of the debate around the Indian poverty line. The official figures are around 35 percent, even while you should keep in mind that there is a wealth of research pointing at a massive underestimation due to the current poverty line.

The idea is that recognizing either 240 million or 600 million poor means radically different policies for a government, so clearly the stakes are high for the parties representing richer segments of the population. 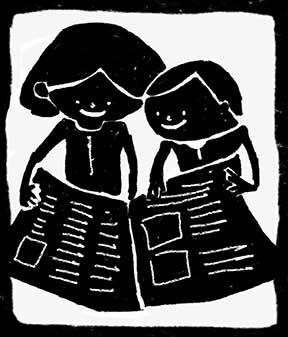 How to improve the poverty line?
A simple first step to improve the excessively low poverty line would be for India to base it on a “nutritious” food security line, and then include education, sanitation, permanent homes and so forth as part of the criteria. Prosperity sometimes begins with something small, but if a small business owner can’t even protect his goods from going bad, shelter his stock from the elements, or ensure their security, then how is he ever to generate a secure income or have long-term investment plans?

Considering the size of India, poverty differs greatly from one state to another, so poverty lines should be adapted to each state as well as be updated regularly, considering the pace of economic growth in the country.

So what can India do about its poverty problem?

Solution #1: Access to markets and education for everyone
Overall, the opening of Indian markets to the world did over the years contribute to reducing poverty in India by raising the income of a large number of people and opening access to education to many.

Liberalizing the system of exports, imports, and trade, along with the development of higher education in larger cities has been the major factor leading to the rise of the middle class and reduction of urban poverty in India. However, considering the scale of the country, it means that trade reforms and education should penetrate all layers of society if poverty is to be tackled meaningfully and substantially.

Solution #2: Investing in India’s infrastructure and nascent sectors
As over two-thirds of the population lives in rural areas, public investment should focus on developing agriculture and basic infrastructure, but “for real” this time. While drought has become the plight of so many places on earth, a lot of Indian regions have plenty of water and plenty of people to exploit the land, rather than be excluded. On top of that, the manufacturing sector is starting to boom so now is the best time to improve agricultural productivity and employ the jobless or underemployed and prevent migration to the cities.

The private sector will be more than happy to invest and trade with new regions, but not if they’re unprofitable or inaccessible. And that is the role of the state: to provide at least the most basic infrastructure and roads to connect villages. Finding these funds won’t even be that hard if the government considers the ineffective subsidies given elsewhere for fertilizers and such. Plans to reintroduce or reinforce social safety nets have yet to be implemented.

Solution #3: Better institutions to regulate and grow the economy
In many ways the situation at the local level has been very liberal for millennia, exempt of any form of government intervention. This has not resulted in prosperity. A better understanding of markets as institutions which best develop under certain conditions is crucial to the liberal approach.

If a government is really serious about promoting grassroots growth for everyone, then market forces must be spurred; a legal framework is necessary to protect citizens and entrepreneurs and more support at the local level is needed (through technology investment and education).

Are we asking for too much?
India also needs a more effective tax system as its private sector grows. This will give it enough to finance the right pro-poor policies and review their efficiency. Recently, the decentralization of the administration was an attempt to improve such efficiency However, as local governments were left with more power of oversight, the anti-poverty programs had in fact worse results than before. And that’s because these officials simply didn’t have much incentive to actually help the poor (“doing your job” doesn’t count as enough of an incentive it seems), and the poor do not hold enough authority to denounce them to higher ranked officials.

In the end it’s all a learning process. And even in the most developed countries, mistakes happen, all the time. But at the end of the day, it’s about not making too many of them.

Truth be told, creating new jobs, facing new challenges and changing a whole economic system is quite an undertaking. In a country undergoing a profound transition such as India, the politicians run a big part of the show. They set the bar and show how much can be done.

Get involved: Lots of NGOs – local, national, and international – are working to understand and tackle poverty. Look for an NGO nearby and let your students plan a visit. See if you can arrange for your students to spend a few days volunteering with the NGO. Students can talk to the employees there, visit poverty stricken areas with the NGO staff and experience first-hand what living in poverty actually means.

Do a project: Take your students to visit a slum. Let the students talk to families living there to get an account of what life is like for them. Students can, based on this experience, write a short feature for the local newspaper, make short video films, or documentaries to air in school.

Have an exhibition: A good way of helping tackle poverty is to make as many people aware of what it actually means. The material and knowledge that the students gather through research can be displayed in the school and parents and friends of the school can be invited.

Let the students write a short essay on what contribution, no matter how small, they can make to help the poor in their area. Perhaps they can organize a small Sunday school? Or collect old clothes and toys for the children in the slum nearby?

The author is a digital strategist, researcher and filmmaker who lives to enjoy the variety of projects that cross his path. He is driven by a passion to understand how large systems work, from cultures and languages to technology and society. He can be reached at [email protected].