Field trips or school excursions are something I have never really looked forward to, especially with a group of teenagers with growing pangs and pimples, but if you are part of a school it is something that you cannot avoid. I left school teaching a while ago but remember vividly the two trips I made with a group of tenth standard boys and girls of an elite school I was teaching in at some time in the past. Looking back I don’t regret making the trips because I learnt something about students I would never have learnt in a classroom.

The first trip was to Kodaikanal where we were forty students, two teachers and a parent. I noticed one thing – you can depend on the boys to be helpful and responsible, something you don’t see in the classroom and they are also very aware of the surroundings and protective of the girls. For the girls it is a sense of freedom and giggles and secret whisperings on the train journey, totally oblivious of ogling men mainly out of sheer ignorance and having been extremely protected at home. Too late for a teacher to lecture them on these matters at that moment but it was a point to be taken up later and also to be remembered on the next trip. Most of the students had not travelled by ordinary sleeper class or some not even by train (the school catered to the rich and famous, hence the term elite I had referred to in the beginning).

Well, it was a sleepless night for us on the train and we reached Kodai by afternoon the next day. We had booked rooms in the Youth Hostel run by the tourism department. Again the boys adjusted quickly but there were moans of dismay from the girls at the dormitory and the bathrooms and to make matters worse there was no water in the bathrooms. The young men rose to the occasion and carried water from the pipe outside for everyone and I was really impressed by their willingness to help, when all I usually saw in class was their total engrossment with themselves or their particular groups.

The highlight of activity in Kodai was the boat trip which both myself and my colleague Saroja dreaded but which we knew could not be avoided, so against our better judgment and with a sense of foreboding, we agreed to let them go with, of course, experienced attendants from the Kodai tourism department. All went well but trouble came from a totally unexpected quarter… the head girl of the school… totally reliable and someone we expected to control her more boisterous friends … decided in the middle of the Kodai Lake to jump from one boat to another. We froze. Shouting would not help and we saw both boats rocking. It could topple over any moment and the result would have been catastrophic… no one could survive the icy cold water for more than five minutes we were told later … Providence was with us that day and nothing happened but we got them on shore and by the end of the dressing down I gave them, I was the most unpopular person on that trip… they avoided me like the plague and kept a distance …it did not bother me and the rest of the trip went off without an incident. What I learnt from this trip was to expect the unexpected and away from constraints of school rules and parental control young people tend to go haywire in their thinking. All the more reason for teachers to be alert and though I did not want to dampen their excursion spirit by being a wet blanket, some sort of discipline has to be maintained during trips if we are to get them back safely to their parents. 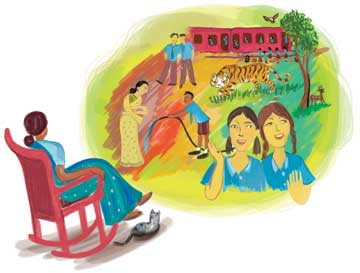 That was trip one. The next was with another group to Mysore and Bandipur. It was off season so our arrival in Bandipur was met with cries and protests of dismay when we were told that the wild life had all disappeared into the interiors of the forest. The guide suggested we take the bus for about five kilometers and maybe we could see some elephants and deer… this suggestion appeased them to some extent and off we set out. We saw elephants at a distance and no one was particularly impressed …where were the tigers? Now tiger sighting, as everyone knows is rare, expert wildlife enthusiasts sometimes go days in the forest seeing only pug marks and not a real tiger, which brings me to the high point of this trip. We saw deer quite close by and with the persuasion of the parents who joined the clamour of the students, I allowed them to get off the bus and take pictures of the deer. After all we were near the Guest House and it was safe, I presumed. It was not and you will realize why. We got back into the bus and had driven slowly for about minutes when the driver shushed us and told us to be extremely quiet. More deer? NO! It was the most amazing sight …something my colleague Sarla who has travelled every possible forest reserve would have died to see. Lying hidden in the grass was the biggest tiger we had ever seen. After a few minutes the royal animal got up, stretched itself and walked away without a backward glance at us. It was an unbelievable sight and only after I got over the sheer magnificence of it, did I realize the danger I had put all of us in, by again listening to the demands of the excited students. The tiger was really very close to where we had got down to see the deer! And the noise we made could have drawn it closer to us! I still get nightmares thinking about what might have happened and if you think this was a bad call, read on to what occurred further on.

By this time I had enough of the wild so when in Bengaluru the parents suggested a trip to the Banarghatta National Park, I was not for it, but being reassured that it was a government undertaking and there were good vehicles to take us to see the animals in the park, I once again agreed, though not without trepidation. The first batch went and came out safely from the park excited at what they saw. I was with the second batch and when we got into the van I realized it had no barred windows and it was a flimsy, rickety thing, I asked whether the guard carried a rifle as we were told they would, but the answer was negative. Too late to turn back and since the driver assured us there was nothing to worry, we proceeded. Anyone who has gone into this reserve will know that the tigers and lions are not caged and people tend to go near them. Fortunately for us they had all just been fed and were lounging around. All went well till the end of the trip when a group of lions suddenly started chasing the van. The driver looked alarmed and drove as fast as he could and then he said something unbelievable. He said the previous day, the van had broken down in the forest and he was hoping it would not happen. Where was the reliability in anything? Whom can you trust? What would I do in case we stalled … there was no safety in a van without bars. It was horrifying!

Well, we got out in one piece but I never got over the horror of what might have been. So the long and short of it is kids love excursions, the school endorses it as part of a learning activity which without doubt it is, but every time teachers go on these trips, I am sure in hindsight there are things we wish we had not done or thought the better of. As for the students, they love every bit of these trips and though they bond well with the teachers if things go well they become petulant and sulky if it doesn’t. To maintain a balance is at times difficult and any wrong decision will make the teachers accountable. I have long since stopped going on these trips but they remain an indelible part of the memories that make up my now comparatively mundane life.

The author is a communication facilitator and a faculty at BITS Pilani’s Integral Learning Programme. She can be reached at [email protected].