Every reader of Teacher Plus is aware that, by and large, our education systems in India leave a great deal to be desired. You wouldn’t really need to list the negative factors in its constitution, though you might argue about the priorities on that list. If you’re in the trade, you get to know the irritants in short order. But at the top of the classroom – or in the office – you put up as good a face as you can on what you are actually getting paid to do, lead, manage, administer, or actually teach. I’m a top-of-the-classroom man, and so it is up to me to uplift – yes, uplift – the kids through both what I do and, more important, how I do it. 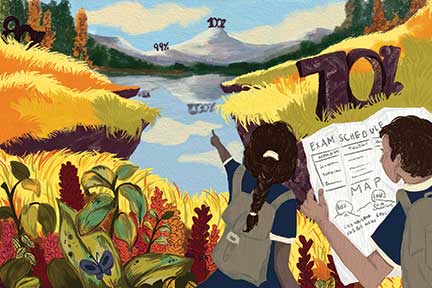 I’m saying all this because my “hobby-horse” is the horrifying statistic that India has the highest student-suicide rate in the world, and that too on a climbing graph, according to the government’s own published figures. But I dare not tell my students – mostly seniors – about that, for a couple of reasons, some of which are obvious, some less so.

Obvious reasons are, the youngsters get frightened. Somehow, “Will I be next?” tends to niggle at them, I found. Second, the fact that others have done it makes it easier for me – “See, they’ve escaped their problems, I can do the same thing”. This second reason is reinforced by the never-ending reports of young suicides in the daily papers. But then, I am happy to say, youngsters don’t read the papers!

There’s another reason, though, that it is given less attention. It arises out of Rupert Sheldrake’s important discovery called morphic resonance. Briefly, it is a phenomenon that ideas are spread not just by propaganda but by this force, morphic resonance, which means that all ideas create a field, a bit like a magnetic field, and the stronger the idea in terms of numbers and intensity, the more powerful it becomes.

Its significance for our purposes is, while people may think an idea is just theirs, very often it is actually taken in from the field to which their interest supplied the antenna. Put very briefly, if you drop a bicycle into the Andaman Islands among indigenous groups that have never seen such a machine, they will learn to cycle much sooner because the concept or idea of cycling is already a strong field in itself. This of course has many ramifications, but for our purposes it comes down to this: the idea of committing suicide is already a strong field in itself, and so a disturbed or suffering person is being powerfully influenced by it, as soon as she/he becomes conscious of wanting to escape the pain. Recently we had the horrific idea of the Blue Whale, which the Government of India promptly – though not promptly enough – squelched from our news media. This ‘squelching’ lessened the power of the concept, though alas it resurfaced in a new guise called Momo.

So then, it is up to the teacher to offset the power of such negative concepts by substituting positive ones. The teacher has to reinforce strongly that this girl or boy is a good girl or boy, that life is well worth participating in, that not being able to sort out Archimedes is no big deal, that the adventure called life, and especially young life, is just that: an adventure to be entered into with the intention of emerging out of it triumphantly.

So I discovered that when the girls and boys have to face their nightmare called exams, it is up to me to reframe the ordeal in less frightening shape. I refashion the whole thing as a challenge, an adventure, even a lark, not intimately related to the business of everyday life but something they do like rock-climbing or hang-gliding. And just as these things imply lots of preparation and practice, so this racket they are in, called Maths or EngLit or Chem or whatever – they need lots of preparation and practice.

It would be gratifying to say that my students did better than ever. They did just the same – but the mood was really more upbeat, and there was very little notion of suicide. In morphic resonance terms, the field of Adventure and Triumph was more compelling than the field of merely getting an acceptable percentage.

I have in fairness to add a sort of PS: my biggest negative in this effort was – no, is, the attitude and beliefs of parents who regard percentages as gods to be wooed at any cost, even the child’s own peace of mind and health. We did talk to parents, but lectures are poor weapons against ubiquitous convictions to the contrary. Still: I recommend the approach I have just outlined. Try it.

The author has been an educationist in India for more than half a century, and has lectured, made documentaries, and written widely and frequently on the subject. He can be reached at macbren82@gmail.com.