It was the eve of the math exam. The ten-year old loved the languages and the social science subjects and fared well in those. Math, however, was his Achilles heel, and it often frustrated him to no end. Even as fellow students would knock off those tricky math problems with panache, his palms would break into a sweat as those characters in the math textbook blurred before his eyes.

The new math teacher had joined just a week ago. He knew he was not a favourite with the earlier teacher and hated to imagine that the new one also would find out just who brought up the bottom of the class for the subject.

Now, on the eve of the exam, he sat in his room and looked out the window at the fireflies that hovered about the streetlight outside. He heard the clock strike ten and stiffened a little. He was barely able to finish dinner and had rushed upstairs to his room to work out some sums in a last ditch effort to prepare for that dreaded test the next morning. But, as it always happened, the more he tried to grapple with math, the more it confused him; the more he tried to beat those numerical demons, the more he got beaten back.

He may have dozed off with his head buried in a particularly difficult problem. It took the combined blare of his alarm clock and the pounding on the doors to wake him up. He went through the motions of getting ready and stumbled into the school bus in a daze.

As the bus approached the school gates, he felt his heart beat faster. Inside, the classroom buzzed with the excited chatter of his classmates. All he could hear was his own heartbeat in the backdrop of a deafening silence.

There were about 15 minutes to go, as their new math teacher walked in with the question papers. He felt himself sink in his seat. With just five minutes to the bell, the new teacher was busy readying the question sheets when he heard a commotion in the classroom. All the students were huddled around one desk. A student lay forward, motionless, with his head on the desk. 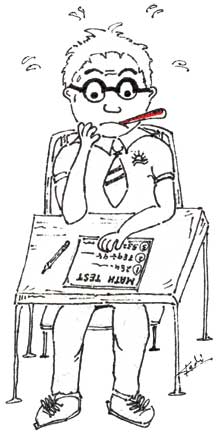 Just as the teacher had announced “5 minutes to start”, the idea struck him like a godsend. How about bunking the exam by feigning illness? That way, he could escape that torturous ordeal and also come unscathed when the results would be out!

Amidst the furore that his ‘passing out’ had triggered, he heard footsteps walk up to him. From between his half shut eyes, he could see the outline of an adult stooping over him. A hand gently touched his forehead and a calm voice asked the other students to get someone to help carry him out.

As he lay in the sick room, he couldn’t help feeling a little guilty and ashamed of himself. But, there was also an overwhelming sense of relief.

“How are you feeling now?” It was the math teacher. It was almost like a thousand math questions had gripped him all at once. He couldn’t think of an answer. He just lay with his eyes shut, as if still in a coma. He almost wished he had never thought up and did something so stupid. But, he had to see his act through and hope he would never get caught. For, getting caught would mean not just a failed exam but a censure, possibly a punishment as well.

He lay still, till a soft voice whispered in his ear, almost causing him to start.
“It’s alright. I won’t tell anyone. I know you are perfectly fine.”
His heart beat faster than it did all morning. Even though he did not speak the voice persisted.
“If you write this exam, you might lose today. If you do not, you will lose forever.”

There was something startlingly profound in that statement. He opened his eyes and saw himself staring blankly at his teacher’s face.

He had half-expected a stern face scowling at him in rebuke, but the teacher’s eyes were filled with warmth and compassion. With a smile, he went on. “I have checked up on all my students. They are all good. Especially, one who is very good with most subjects, except mine. And I am sure I can help him with that too.”

Looking at the understanding eyes of his teacher caused his own to well up in guilt and shame. But before he could say anything, he felt a soft touch on his cheeks wiping away a large teardrop.

“Can we go back into the classroom now? Don’t worry about the result. Even before you start writing the exam, you would have won the test…just by attempting it.”

He managed to smile back weakly.

Back in the classroom, he felt a calmness fill him. The pounding had gone, replaced with a resolve. The problems still were all beyond him, but he had found his solution. And he had one person to thank for – his teacher.

It was an important lesson he learnt in life that day.

Just before the bell went off, he stood up and walked over to hand in his answer paper. As their eyes met, he felt an arm pat him on his shoulders. He smiled back briefly and strode out of the room.

He knew he would fail that exam but he had passed the real test.

The author, a long time banker, now heads Content for India’s premier travel and holiday planning website www.holidayiq.com. He can be reached at p.rajesh123@gmail.com.