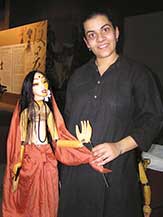 Career/education, family, friends and leisure are typically the four important spaces in a young person’s life. Pravah, with support from ComMutiny – The Youth Collective and Oxfam-India, has developed the concept of ‘the 5th space’, which enriches relationships in the other four spaces by nourishing the capacities of young people to understand and define their connection to the world and to take effective and responsible action. The 5th space believes that self transformation is the first step towards creating change in our relationships and in society. Over the next few issues of Teacher Plus, we will feature stories of people and organizations making a difference in education by engaging with processes at the heart of the 5th Space formulation.
This month‘s article brings you the story of Anurupa Roy.

“When I see a bunch of young people, I see huge potential. It is the youth that will save our country. They have got immense energy. We need to trust their capabilities. Instead of doing that, we mollycoddle them thinking they are too fragile and need to be sheltered. I hear adults tell young people, ‘You know nothing about this. Don’t try your hand at it.’ Now isn’t that ridiculous? How will young people grow to take ownership if you don’t let them try out something on their own?” says Anurupa Roy, Founder and Managing Trustee of Kat Katha Puppet Arts Trust in Delhi. Her way of thinking is perfectly aligned with the 5th Space idea of young people being entrusted with leadership roles to help them realize their potential.

This 36 year old was barely 21 when she started Kat Katha. Though it has been a decade and a half, she is all too familiar with the dilemmas and struggles that young people making career decisions have to go through. Though she pursued puppetry as a hobby class at Sardar Patel Vidyalaya and spent a lot of time doing theatre and puppetry at Lady Shriram College, she found it difficult to acknowledge to herself that this is what she wanted to do all her life. She toyed with the idea of studying social anthropology or training to be a filmmaker. She even entertained the thought that if she could not be a performer, she would take up a profession that would allow her to be around performers.

Anurupa’s mind was occupied with ideas about what young people generally do at her age, what her peers were doing with their lives, what it would mean to steer away from the norm. She was strongly considering joining Jamia Millia Islamia University in Delhi or the School for Oriental and African Studies in London. However, she was able to muster the courage to pursue her love of puppetry, and this was partially due to the faith placed in her by Dr. Meenakshi Gopinath, her college principal.

Besides, Anurupa’s family was fairly supportive of her interests, and that helped calm down some of her anxieties. She shares, “I had to experience none of the usual family drama or even a question like ‘Puppetry – is that even a profession?’ My family never said ‘Don’t do it’. They said ‘Get an education in puppet theatre’. That was sound advice. It placed a value on what I was interested in. In the first four years, I had no regular work. My parents not saying ‘What are you doing with your life?’ was huge encouragement. When your family places faith in you, you feel strengthened. My father is an exhibition designer and architect. He has been a freelancer all his life, so I did not have to explain at home what freelance work is about. In a salaried family, my choice would have been a huge shock. In my family, the fact that I will not get a regular paycheck is understood.”

Anurupa chose puppetry knowing that there was no professional training available for the same in India. She went abroad to study at Dramatiska Institutet for Film, TV, Drama and Radio at the University of Stockholm in Sweden, and at Scoula De La Guaratelle (School of Traditional Glove Puppetry) at Naples, Italy. She has since created a substantial body of work in puppet theatre offering perspectives on reproductive health, livelihood building for tsunami survivors, women’s experiences in conflict zones, and other social issues. Her belief in puppet theatre being a non-structured, flexible space for creative self-expression has found validation in the form of invitations to numerous international puppetry festivals and conferences, as well as the Junior Fellowship of Arts for Puppet Theatre for 2003-05 awarded by the Department of Culture, Government of India.

Anurupa is keen to break the stereotypes surrounding puppetry. Her way of doing this is through designing and directing puppet performances that challenge the widely held notion about puppet theatre being only for frivolous entertainment and having no serious role or status as an art form. The Kat Katha Theatre Repertory has been performing shows that blend entertainment with a strong social message or satire. “We have made these boxes – dance, music, theatre, etc., and within that, classical, folk and what not. Puppetry is an amalgam where plastic and performing arts come together. It is constantly going to and taking from a lot of different forms. Everybody has been watching half-hearted puppet theatre sold as a side-show for so long. We want to change their image of puppet theatre. When they come to our shows, we give them something they have not seen before. At a time, 400 people are going through a mental shift about what puppet theatre is.”

Apart from this, she conducts workshops with students from schools, colleges, universities, and also youth groups that have come together around common interests in film, theatre, education, conflict resolution, and peace building. Her workshop processes involve a lot of self-work. Her objective here is to enable the young participants to explore their own thoughts and express themselves. If the group has formed around a particular thematic interest or issue, she works with them to create new performances that address their issues and express them in a way that feels organic and authentic to them and is also effective in communicating to an audience.

“Art forms are containers. They are not just ways of expressing but also ways of looking at the world, ways of living your life. As an artist, you have to constantly reflect on the world and saying something – whether it is a performance or a workshop. When I am doing a workshop, I ask myself ‘Can I catalyze something for these people so that there could be various kinds of discoveries? Can the artist come in and say that there are 10 ways of looking at something?’ Altering the point of view is very important. Only then can you look at things afresh,” says Anurupa. 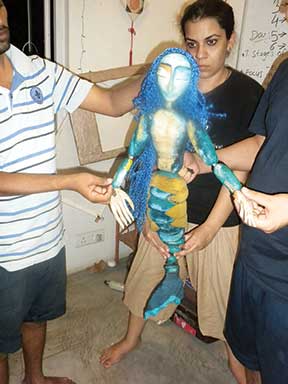 She also conducts courses and training programmes for people who are looking to have a career in puppetry or use puppet theatre as a significant part of their work. However, she finds that not many of them are willing to take a whole-hearted plunge. They are anxious about what the future might hold for them but tend to blame the family for their indecisiveness. Anurupa says, “If you have the grit, you can stay on. I find the victim mentality coming in when there is not enough determination. People blame family, circumstances, misfortunes, all that. Why use the family as a shield not to do your own thing or lead your own life? Parents are not enemies. They want the best for their children. Young people should be open to explaining their choices, discussing uncomfortable things, listening to feedback. How does whining help? You can either stay comfortable in your prison, or take responsibility. You must place value on your own work before you expect others to do it. Once you have decided to do something, you must leave no stone unturned.”

I first came across her work while reading a short monograph titled Storytelling and Puppetry as Tools of Conflict Resolution: Experiences from Kashmir, one of the outcomes of a project undertaken by Anurupa in 2005-2006 thanks to a fellowship awarded by Women in Security, Conflict Management and Peace (WISCOMP), an initiative of the Foundation for Universal Responsibility based in Delhi. It is a powerful documentation of her interactions with girls in Kashmir, in workshop situations – involving guided meditation, games, exercises, puppet-making, storytelling, songs, folklore, poetry, and dialogue – designed to build trust and confidence, thus laying the basis for coping and healing.

The sharing of these experiences eventually led to a stage production devised to take the voices of these young Kashmiri women to audiences outside Kashmir and familiarize them with realities that are unavailable for instant consumption through mainstream media. Anurupa wanted to use cultural resources in the community – particularly the resonances of Lal Ded or Lalla, the 14th century mystic poet of Kashmir – to strengthen and celebrate resilience, love, peace, and nonviolent resistance.

Quite serendipitously, Anurupa got to know that very close to the workshop venue was a shrine believed to be the resting place of Lalla. She took the participants there, guided by the feeling that this might lead to something worthwhile. In the monograph, she writes, “We spent half an hour in the little room attached to the shrine. Some of the girls read their prayers. It was a beautiful silence. Then we stepped out into the sun and all of us found a place under the tree. We gave the group one task. Write a letter to Lalla. They could write anything. They sat for over an hour writing letters. This was the most unique moment of the entire workshop.”

She further writes, “We had started searching for Lalla in Delhi and had finally found her in her resting place. This finding was not just ours: the girls had found Lalla, who had lain in their own backyard but held no real significance in their lives…. For the girls who had passed her shrine almost every day, or had been inside and had vaguely known her name, she had become a woman, just like them, who had died six centuries ago but was suddenly alive because they knew her so intimately.”

In knowing Lalla, the girls got to know themselves better. And in working with them through this process, Anurupa got to know herself better. Self-exploration, as she says, is at the heart of her work.

The author has been awarded a Media Projects Fellowship by ComMutiny in collaboration with the Youth and Civil Society Initiative of Sir Ratan Tata Trust and DKA-Austria. He can be reached at chintan.backups@gmail.com. To know more about the 5th Space, visit www.facebook.com/5thSpace.